Army Buddy: Roy Moore And I Went To A Vietnamese Child Brothel, No Big Deal

In a bizarre election-eve rally for Roy Moore, the twice-impeached judge and accused serial sexual predator who was reportedly banned... 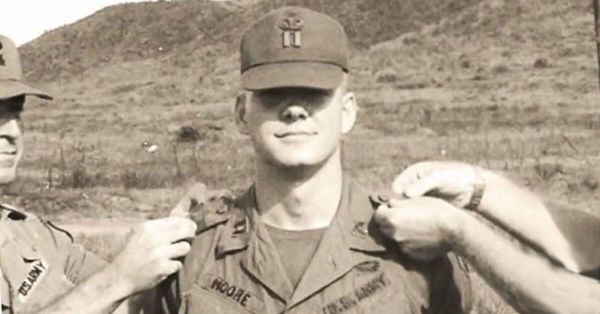 In a bizarre election-eve rally for Roy Moore, the twice-impeached judge and accused serial sexual predator who was reportedly banned from the Gadsden, Alabama, mall and monitored by police over a penchant for young shopgirls, an Army buddy of the Republican Senate candidate explained Dec. 11 that Moore couldn’t be the amoral power-hogging horndog accusers have made him out to be, because they went to a Vietnamese house of child prostitution together, and Moore comported himself admirably while sequestered in the seraglio.

The rally had already made news after Moore’s wife, Kayla Moore, defended her husband against charges of anti-Semitism in curiously anti-Semitic tones. “Fake news will tell you we don’t care for Jews,” she said. “I just wanna set the record straight while they’re all here: One of our attorneys is a Jew.”

But weirder endorsements were ahead for Moore, a self-identified biblical conservative who has been accused, among other things, of forcing a 14-year-old girl to touch his penis.

The really “moving character testimony,” as the pro-Moore white nationalist site Breitbart described it, came from William Staehle, a New Jersey attorney who served with Moore, a West Point grad, in a military police battalion in Da Nang as the Vietnam War wound down in 1971. “Last time I had seen him he was wearing jungle fatigues,” Staehle told the assembled crowd about Moore. “And I tell you, people of Alabama, he’s the same guy.”

Then Staehle told the people of Alabama about the time he and Moore walked into a whorehouse full of underage girls.

This isn’t the first time Staehle has told the story in defense of Moore; he related it to an interviewer at the New Jersey Star-Ledger last month, after writing it up in an op-ed for Yellowhammer News, a blog for Crimson Tide-loving conservatives. I’m going to let Staehle tell the story in his own words, from that Yellowhammer column:

While in Vietnam, there came a time when another officer invited Roy and me to go with him into town after duty hours for a couple of beers… On other occasions with other officers, we would go to the officers’ club at the air force base, but on this occasion, he told us he knew of another place in town.

When we arrived at the place and went inside, it was clear to Roy and me that he had taken us to a brothel. That officer appeared to know people there, as he was greeted by one or two young women in provocative attire.

The place was plush. There were other American servicemen there. Alcohol was being served. There were plenty of very attractive young women clearly eager for an intimate time.

In less time than it took any of the women to approach us, Roy turned to me and said words to this effect, “We shouldn’t be here. I am leaving.”

While Staehle’s retelling last night was pretty much the same — the pair rode home chastely, leaving their unnamed officer friend up to his eyeballs in sex workers — one detail seems to have changed: The working girls got a lot younger.

“There were certainly pretty girls. And they were girls. They were young. Some were very young,” he said last night, by way of exonerating his Ten Commandments-loving politician friend.

Staehle, 70, a longtime insurance attorney, has also cast doubt on the stories of the nine women who’ve publicly identified Moore as a sexual predator, telling one reporter: “With the passage of time, the story changes… People exaggerate things. They add to the story.”

Staehle insists, however, that his war story — and Moore’s denials of wrongdoing — are unimpeachable: “You don't lie to a guy you went to war with.”

Voters in Alabama will decide today whether Moore — who also once bragged that his soldiers in Vietnam had wanted to frag him — deserves a six-year United States Senate term to represent the political, social, and cultural interests of 4.8 million state residents, and 330 million Americans.

2 P.M. EST, Tuesday, Dec. 12: This analysis has been updated with links to sourcing for allegations that Moore was banned from the mall and was monitored by local police over his rumored predilections for young women.