Gen. Mark Milley has a dire message for the U.S. military-industrial complex: America’s forever wars are far from over. Speaking... 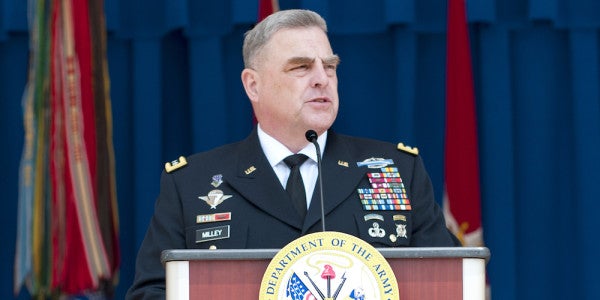 Gen. Mark Milley has a dire message for the U.S. military-industrial complex: America’s forever wars are far from over.

Speaking at the Association of the U.S. Army’s annual convention in Washington, the Army chief of staff said the Department of Defense will increasingly engage in the training and advisory missions that have defined the 16-year-old Global War on Terror — and those missions will rise in frequency for decades to come.

“We are training, advising, and assisting indigenous armies all over the world, and I expect that will increase and not decrease,” Milley told military and defense leaders of governments and contractors from around the world assembled at AUSA on Oct. 9.

The Army has been working toward building its “advise and assist” capacity for years as part of the reconstruction and security efforts in Iraq and Afghanistan. The branch’s first Security Force Assistance Brigades (SFABs), specialized units designed to free up traditional combat brigades from supervisory roles alongside local security forces, were established in February to help take over the traditionally ad hoc training role frequently managed by special operations forces teams, with a planned implementation by this month. And according to Milley, the accelerated retooling of the SFABs is a crucial part of the Army’s transformation into a 21st-century land force.

But “advise and assist” missions, as some combat veterans pointed out in response to Milley’s comments, are less a statement of a “profound, fundamental change” for the branch’s missions abroad, as the Army tried to spin it. Instead, they’re a subtle admission by a high-ranking Army official that yes, the Global War on Terror is a forever war, one the Pentagon doesn’t plan on quitting anytime soon.

The future force will need to use every means of cover and concealment possible, due to the proliferation of internet-based sensors and other technology, Army Chief of Staff Gen. Mark Milley said. Soldiers will also need to operate in austere environments in small groups, possibly without communications with higher headquarters for weeks at a time, he said.Jared Keller

Even the most casual observers of U.S. military affairs know that those “advise and assist” missions — the defining category for troop deployments to Afghanistan after the official end of NATO combat missions in 2014, and to Iraq and Syria under Operation Inherent Resolve since that same year — frequently escalate into the sort of firefights that characterize an outright war zone.

Consider the deaths of four Army Green Berets from the 1st Battalion, 3rd Special Forces group in Niger on Oct. 5: Though the 645 U.S. military personnel deployed there are technically there to back up Nigerien counterterrorism operations and provide intelligence support for French forces sticking it to al-Qaeda in Mali, those troops were killed during a standard reconnaissance patrol. “Advise and assist” missions, especially with escalating troop deployments (as with Niger, which has seen gradual troop increases since 2013), are not objectively much different than a traditional combat mission: Militants shoot, and kill, U.S. troops, whenever and wherever they can.

Milley seemed to acknowledge the increasing intensity of Army deployments downrange. “Water, chow, ammo, fuel, maintenance and medical support will be all that we should plan for,” he told AUSA. “Being surrounded will become the norm, the routine, the life of a unit in combat … In short, learning to be comfortable with being seriously miserable every single minute of every single day will have to become a way of life for an Army on the battlefield that I see coming.”

But based on the DoD’s experience elsewhere, those “advise and assist” missions meant to delegate daily combat to regional militaries will almost inevitably lead to U.S. combat operations anyway, for one simple reason: the Pentagon has done a piss-poor job of bolstering local security forces since the beginning of the Global War on Terror. The DoD knows this: Just consider the September 2017 Special Inspector General of Afghanistan Reconstruction report that found the Army “was not properly prepared from the outset” to bolster the Afghan National Defense and Security Forces (ANDSF), despite $70 billion spent over the last 15 years.

Some of these issues were based on a learning curve for the DoD. The SIGAR report points to the traditional bureaucratic problems of “interagency framework and decision-making processes” that inevitably arise in, well, creating a brand new army from the ground up. But several gross missteps — focusing solely on military operations rather than institutional development, creating problematic partnerships with local militia, and even providing Western equipment and systems to a population that largely doesn’t just speak English, but is functionally illiterate — “undermined communication and coordination, damaged trust, intensified frictions, and contributed to initial gross under-resourcing.” Luckily, thanks to SIGAR, the DoD appears to have learned from its initial mistakes in Afghanistan, with the DoD touting training efforts by the Marine Corps with Anbar Operations Command in Iraq.

But issues of regional culture and customs — the same issues that hampered initial DoD planning for Afghan reconstruction — can create problems among regional security forces from country to country that no level of Pentagon planning can overcome in the long term. Corruption on the unit and ministerial level has left the Combined Security Transition Command–Afghanistan (CSTC-A) unable to track actual ANSDF force levels, let alone weapons and ammunitions stockpiles that Afghan security forces frequently turn over to Taliban fighters to make a quick buck. Those Afghan forces who actually showed up to U.S.-led training exercises failed miserably at meeting training standards. Even outside regular corruption, frequent military interventions continue to pose political problems for the U.S. government and DoD operations abroad.

How the new SFABs will perform among the DoD’s future “advise and assist” missions is an open question, even if the DoD is shelling out a nice fat $5,000 bonus for soldiers interested in kicking ass with the new training brigades. Based on the 2017 SIGAR report, the only ANSDF detachment to grow into a formidable force since the outset of Operation Resolute Support is the Afghan Special Forces, trained by both soldiers from the Army’s 10th Mountain Division and the very Green Berets currently tasked with similar functions in Niger. But based on Milley’s comments, the Army is clearly poised to make a major push in reconstruction efforts abroad to avoid embarrassing redeployments like the 3,000 additional troops authorized by Trump and Mattis to beat back the rising tide of Taliban forces that threaten to imperil the country yet again.

Milley knows that these advise and assist missions will be an uphill battle, even if he didn’t say so at AUSA, simply because he’s experienced that friction firsthand. In the 2012 edition of “Eyewitness to War,” an oral history of the war in Afghanistan from the perspectives of U.S. military commanders (embedded below), Milley’s 2007 account of advise and assist efforts during Operation Enduring Freedom — when he was a colonel in command of the 10th Mountain Division’s 2nd Brigade — paints a dire picture of what exactly these missions actually require: building systems and organizations from the ground up.

“They did have battalions on paper, organized, in garrison, and they had battalion commanders and a battalion headquarters,” Milley said of the state of the Afghan National Army in his interview. He added (emphasis ours):

But to say they had functional, fully operational, combat-ready battalions at the time I was there, there may have been a couple, but there were not many when I left … For the most part, [Afghan soldiers] had the tactical operations down pat. They know how to fire their weapons and they know how to engage the enemy. What they needed was for us to help them sustain themselves.

Eyewitness To War: US Army Advisors in Afghanistan (Volume III) by Jared Keller on Scribd

Miley concluded his 2007 interview with an optimistic call to action: “It is a long war, we are going to win it, and we have to stay in the fight.” A decade later, with 3,000 more U.S. combat troops en route to Afghanistan, it’s clear that the Army is gearing up for a long haul — and based on Milley’s comments at AUSA, it’s not just Afghanistan where the US plans on hunkering down for the duration of the forever war.