Marine veteran Austin Tice has been held in Syria for 7 years. It’s time to bring him home

"He's been gone for seven years now and it's past time for him to be home. Congress can help accomplish that mission." 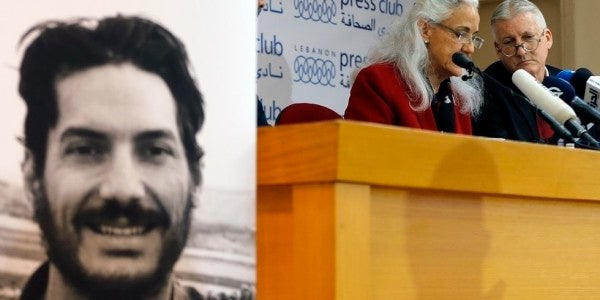 The last time the world saw Marine veteran Austin Tice, he had been taken prisoner by armed men. It was unclear whether his captors were jihadists or allies of Syrian dictator Bashar al Assad who were disguised as Islamic radicals.

Blindfolded and nearly out of breath, Tice spoke in Arabic before breaking into English:”Oh Jesus. Oh Jesus.”

That was from a video posted on YouTube on Sept. 26, 2012, several weeks after Tice went missing near Damascus, Syria, while working as a freelance journalist for McClatchy and the Washington Post.

Now that Tice has been held in captivity for more than seven years, reporters who have regular access to President Donald Trump need to start asking him how he is going to bring Tice home.

Trump is one of the most media-accessible presidents in history. He speaks at length to reporters almost every day and does not hold back when asked about the issues that he cares about — such as, apparently, his efforts to secure the safe release of Americans held hostage abroad.

On Friday, Trump touted his record on recovering American hostages, citing his administration's work with the government of North Korea to gain the release of Otto Warmbier, who returned to the United States in a coma and died shortly thereafter, and the government oof Turkey to win the safe return of Andrew Brunson.

“I work hard on hostages,” Trump said. “I think you would say, 'I think most presidents wouldn't do that.' These are great people and we get them home. We've had tremendous success.”

But the president's envoy for hostage affairs Robert O'Brien was named as Trump's national security advisor on Sept. 18., and it was not immediately clear if O'Brien's promotion affects the State Department's efforts to negotiate Tice's release.

While the U.S. government's efforts to bring Tice home have been held in secret, the National Press Club's Journalism Institute has taken action in public to draw attention to Tice's plight.

On Sept. 23, about 100 volunteers and the Tice family will fan out across Capitol Hill to talk to lawmakers about Tice and invite them to see an exhibit of pictures that he took in Syria, said Julie Moos, the institute's executive director.

“He's been gone for seven years now and it's past time for him to be home,” Moos told Task & Purpose. “Congress can help accomplish that mission.”

Having more people ask government officials what they are doing to get Tice home will help get him released, said Moos, who recalled the public attention that another Marine veteran, Terry Anderson, received while he was held hostage by Hezbollah from 1985 to 1991.

“Austin has been detained longer than Terry Anderson,” Moos said. “I think the more well-known his name is, the sooner we will see him brought home, I hope.”

However, Terry Anderson's daughter Sulome warned that hostage negotiations are best done in secret because publicity and media attention can make a hostage more valuable to their captors – as was the case with her father.

Anderson said she believes Trump is doing everything he can to win Tice's safe release because this is an issue the president cares deeply about. She raised the possibility that the Trump administration's work to reunite Tice with his family should not be conducted out in the open.

“In this particular case, because the Syrian regime is denying that they have him, I'm not sure how much the media pressure will help,” said Anderson, an author and freelance journalist. “My heart breaks for the family. I'm sure that they feel really helpless and they're trying to do whatever they can to see things set in motion and know that people are working to get their son out.

“I don't fault them at all for – just like my family did – for trying to be as public about that as possible,” she added. “It's just a matter of … it doesn't always have the outcome that is intended.”