I graded the Army Staff College and its leadership. Now a graduating officer grades my advice

I started a heated discussion last year about the U.S. Army Command and General Staff College (CGSC) when, after spending a year at the school being graded and evaluated, I decided to grade and evaluate the school myself. 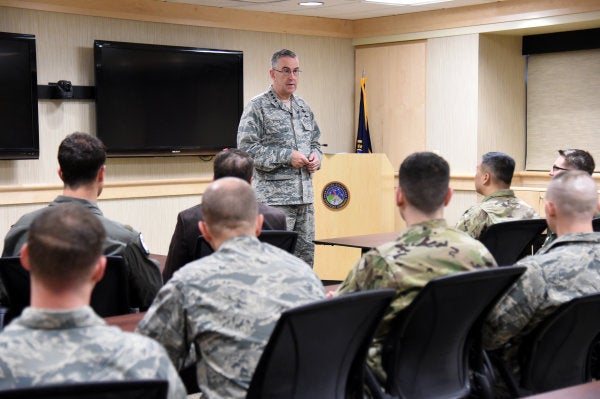 I started a heated discussion last year about the U.S. Army Command and General Staff College (CGSC) when, after spending a year at the school being graded and evaluated, I decided to grade and evaluate the school myself.

In It's A Big Deal: An Officer Grades The Army Staff College And Its Leadership, I was extremely critical of the school and its top leaders. However, the discussion from the article, which was itself extremely critical, catalyzed a thoughtful discussion among students, faculty, and leadership at the school about Mission Command, grading and evaluation, ethics, and similar topics.

Therefore, I wanted to see what students in the current academic year thought and if my article provided any additional insight into the school.

I was in contact with a handful of students interested in providing their thoughts, but only one was bold enough to share, and most importantly, put his name on his assessment. U.S. Army Maj. Benjamin Tesfaye is that student.

I asked Ben a series of questions. Let's examine his response.

Jamie Schwandt: What were your thoughts of my assessment of CGSC prior to the start of the course?

Benjamin Tesfaye: When first reading the article, I thought that it provided an interesting evaluation of the Command and General Staff College in terms of the mental agility and workload that was required of CGSC students. It definitely gave me the impression that CGSC provided a very myopic perspective on how to deal with difficult planning problems.

JS: What do you think of the article a year later and after completing the course?

BT: While the article provided me a level of expectation, there's still a number of things that I agree with from the original article. The lack of Mission Command and very strict approach to managing Field Grade Officers after being lauded as the “top 50%” is pretty frustrating. I wasn't a big fan of X100 (i.e. comprehensive exams) and the entire process leading up to the comps. It was definitely a lot of buildup leading to a pretty deflated Advanced Operations Course (AOC).

JS: What was the response and what type of impact did it have?

BT: I definitely heard some discussion from others in the class about the article. There were some who agreed with the basis of the article, and others who said it came across as an arrogant and pompous assessment of CGSC. I personally don't think it came across that way, just a perspective of someone who went through the course. I didn't hear anything from faculty or leadership, but I think it made those students going through the course take a critical assessment of the lessons we were learning from CGSC.

JS: Why did you decide to participate in this discussion?

BT: It's only fair to provide a comprehensive perspective of CGSC. Year after year it could get better (or worse) and certain staff groups should highlight their experiences and lessons learned to allow the next group of students a “better year of their life” in CGSC.

JS: Similar to how I graded CGSC, what letter grade would you provide the school? (The grade I provided last year is in parentheses)

I felt like we were all rushed through the core curriculum in order to prepare us for X100. AOC was constantly plagued by technical issues with the simulation and there were always more questions than answers. We could've used a repetition in a Corps level fight and even used Mission Command Training Program (MCTP) orders as base products.

I give this grade not based on the Critical Thinking class (because that was really all it was) but based on how other students addressed problems and answered questions. I was constantly impressed with the dialogue that occurred between CGSC students, always peeling back the onion to get to the bottom line.

The ethical models and application we learned were good. There were a number of good takeaways from the course instruction. I don't feel like there was anything I could really 'ding' CGSC on, but we lacked significant discussion from our guest speakers on ethics in large scale ground combat operations rather than limiting it to just a single symposium.

I really enjoyed the leadership lessons and different models for influencing an organization. These are truly valuable lessons, and while I appreciated them, I know that there are additional leadership and systems thinking theories that we could have learned about (i.e. Deming) that could have really rounded out this course topic. Additionally, it needs to be integrated into the history coursework as well to give more context.

While I will admit that I'm not a history buff, this was one of my favorite courses to take. I learned a great deal, but I will say that I would have appreciated some contemporary theory as well.

I think I had some great instructors when it came to tactics, and even better collaboration amongst the students when it came to understanding the capabilities and employment of those warfighting functions below the Division level. Beyond the Division level, I would've liked to have seen greater tactical discussion and employment across multiple domains and in a joint fight, rather than strictly an Army fight. We are missing out on integrating those partners and capabilities in the planning process.

Probably my favorite part of CGSC. I enjoyed the instruction, instructors, and learned to refine my abilities to conduct planning at echelons above the Division. This would be better suited between X100 and AOC, as there were tools and lessons learned during electives that would have been applied during AOC.

The curriculum had a decent progression during the first half of the year, but when it came to AOC, it became extremely frustrating that the curriculum wasn't completed, and we were trying to execute the instruction as it was being developed.

Between requiring certain (international) students to complete this and then turning CGSC into a degree producing program in the next year, CGSC is moving in the right direction. There's already a number of service schools that are degree producing, so it only makes sense that CGSC follows suit. It should allow for students to specialize and focus in specific areas, otherwise it is no better than having a bachelor's in general studies.

I've thought a great deal about this. X100 grading was subjective when it came to the oral boards and it really should have been a pass/fail event. Other instances, instructors graded me fairly and gave me honest feedback about my performance.

This made my CGSC experience more than anything. The people I've met and the relationships I've made will last far into the future. I've learned a great deal from other students, especially international and sister service students, which will make me a better officer.

I think Jamie made the same point last year, and little has changed since then. The school constantly likes to promote this idea of Mission Command but does very little to actually do what they preach. We want to teach Field Grades but treat them like children without holding individuals accountable. Gen. Townsend had a memorandum as the TRADOC commander (it's not verbatim) that said that if something seems dumb, then change it…we are definitely stuck on stupid here for some things.

CGSC gets a solid B from me, not because it doesn't deserve an 'A', but because those deficiencies that are pointed out really detract from the learning environment and the ability to really absorb the lessons that are being taught. The instructors I had and (most of) the students that were in class with me helped make up for what was missing.

JS: Looking back over the past year, what were your overall thoughts?

BT: I will say this…I really enjoyed CGSC. In terms of the lessons I learned, the people I met, and the time I've had. I wouldn't have wanted to do it any other way, and I've never been so excited to get back out in the force and take what I've learned and apply it. My Rolodex has expanded tremendously, and I know that I'll constantly reach back to the instructors and students who I encountered here at CGSC.

JS: What recommendations would you provide to improve CGSC?

JS: Do you think articles like this are a good way to improve military education? And should students write and share their honest and candid opinions?

BT: I do think articles like this are important. Being critical of military education is vital to improving the process and making sure the next group/year is prepared to successfully meet the challenges in the future.

JS: Why don't more students write and share their opinions? Do they fear reprisal of some sort?

BT: I definitely think that students don't write and share their opinions because they don't want to be the one person who made a comment or was too critical of the institution. I mean, we are “them” now, right? But guys like LTG(R )Bolger and McMaster were highly critical of their institutions and were still successful. I think we need to frame our criticism in a way that allows both a dialogue and continuous growth of the institution.

When comparing the two assessments, it was clear that Ben had a different perspective of CGSC than I did (which is a good thing). It was interesting to read and compare his responses with mine. After I wrote the article last year, I was floored by the comments. Most were shocked that a student would write such a critical piece. Others thought my military career was likely over.

I wasn't sure what (or if) the military would respond or try to negatively impact my career. To this day there has been no attempt to silence me, nor has there been any negative impact on my career. In my opinion, this last point is the most important and should be the biggest takeaway from this discussion. If I can be highly critical of CGSC and its leadership, and it leads to discussion on how to improve from inside the school (even if they won't admit it came from an article like this), then this demonstrates more of us should write and share our opinions. As Ben said, we are “them” now.

By writing and sharing our opinions, we can help our leaders build a map that represents an accurate picture of what our military education program looks like. Without sharing our thoughts and opinions, our leadership will continue to operate with a map that is not only useless, but one that possesses no link to reality.

The “Mad Major” Jamie Schwandt, USAR, is a logistics officer and has served as an operations officer, planner and commander. Schwandt is a Lean Six Sigma Master Black Belt, Red Team Member, and holds a doctorate from Kansas State University. This article represents his own personal views, which are not necessarily those of the Department of the Army.

Maj. Benjamin Tesfaye, USA, is a student at the U.S. Army Command and General Staff College. He is a medical service corps officer and has served as an executive briefer, analyst, planner and commander. He is certified as a joint planner, DSCA planner and Theater Sustainment Planner, and holds a masters from George Washington University. This article represents his own personal views, which are not necessarily those of the Department of the Army.