It feels like eons ago, but there was a time in 2015 when a bunch of liberty-loving vets and assorted … Continued 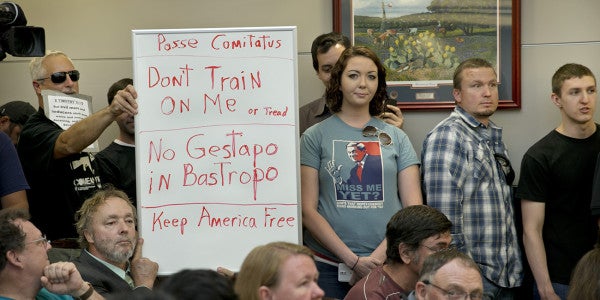 It feels like eons ago, but there was a time in 2015 when a bunch of liberty-loving vets and assorted imaginative thinkers believed, balls to bones, that then-President Barack Obama was preparing the U.S. military for a merciless, rights-eviscerating takeover of America's heartland.

It was a precursor to martial law, they said. It was “way worse than you realize: police, military working together toward population control,” they said. It was “secretly using recently closed Wal-Marts to stockpile supplies for Chinese troops who will be arriving to disarm Americans,” they said. It was preparation for Obama's takeover after an impending asteroid impact that would begin the global apocalypse, they said. It mobilized right-wing activists to prepare to fight their government — their uniformed soldiers! — to the death.

It was batshit insane — so insane it spurred Texas' conservative lieutenant governor and Vietnam veteran David Dewhurst to tell his fellow conservatives in an open letter that “suspicion of our fellow troops must stop.” (“Unfortunately,” he wrote, “some Texans have projected their legitimate concerns about the competence and trustworthiness of President Barack Obama onto these noble warriors. This must stop.”)

And now, according to one of America's top intel chiefs, it turns out the whole Jade Helm 15 freakout was a ruse — a ruse spurred by a Russian online influence campaign.

Retired Air Force general Michael Hayden, who ran the National Security Agency and then the CIA over the span of a decade, told MSNBC yesterday that “Russian bots and the American alt-right media convinced most – many – Texans that Obama planned to round up political dissidents, and it got so much traction that the governor of Texas had to call up the to observe the federal exercise to keep the population calm.”

The Russian disinformation campaign was so successful, Hayden said, that they used it as proof of concept for bigger, splashier trolling of the U.S. electorate.

“At that point I’m figuring the Russians are saying: ‘We can go big time,’” he told MSNBC. “And at that point I think they made the decision: we’re going to play in the electoral process.”

Is it plausible? Could America's collective shitstorm over a bunch of grunts training in the American expanse really have emanated from ze Russians? Sure! The way the Russians' online info ops work (if you haven't been on Facebook or Twitter in the past half-decade) is by appealing to targeted people's inborn fear, uncertainty, and doubt (FUD), reinforcing those insecurities with ginned-up narratives, pushed out and signal-boosted by fake or dormant accounts, to make you think your worst fears are rational, widely shared, and absolutely true.

Pretty much every political party, major marketing firm, and lobby group exploits those visceral FUD impulses to whip up support, but the Russians have typically used their online influence campaigns to divide rather than unite U.S. political blocs.

It's an age-old problem; during the Cold War, Soviet agencies worked to whip up leftist anger at the U.S. government, highlighting America's race and inequality problems. But today, they've found that the most effective, salient mode of fuckery in U.S. affairs is to push right-wing conspiracy theories — “deep state,” Hillary emails, Pizzagate, Seth Rich, Soros, Islamists sneaking over the Mexico-U.S. border, Benghazi — that reinforce the idea that anyone to the left of, say, President Donald Trump, is a robotic foreign-paid human-trafficking overlord doing the bidding of the Rothschilds or Trilaterals or Freemasons or Kellers some other inane shit.

The idea is to get Americans thinking other Americans are the real enemies of humanity and progress. And it works, because a lot of Americans are already disposed to that way of thinking.

On the other hand, it’s an easy cop-out to blame the Russians for every insecure dumbass idea that excitable Americans run with.

Even Obama understood that. Whatever you think of his tenure in office, he didn't take over Texas. He didn't stay past his term in the White House. And he's smart enough to recognize that many of his political enemies' derangement over his tenure didn't need a boost from Russian bots. “They've been feeding their base all kinds of crazy for years, primarily for political expedience,” he told a friendly audience in 2016.

“Really? You think that, like, the entire Pentagon said, 'Oh really, you want to declare martial law, take over Texas, let's do it under the guise of routine training missions,' ” Obama continued. “They took it seriously. This is in the swamp of crazy that has been fed over and over and over and over again.”

If we didn't have an inborn, media-fueled national predilection for conspiracy theories, and antisocial paranoia, and reflexive distrust of one political side or the other, foreign governments would be shit out of luck. But instead, we have this fever swamp of insanity, and it's ripping our goddamn country apart.

That may be complimentary to the Russians and their efforts at subversion, but ultimately it's not their fault. It's ours.