Defense Secretary Jim Mattis on Friday attempted to downplay a recent insider attack in Afghanistan that wiped out two top... 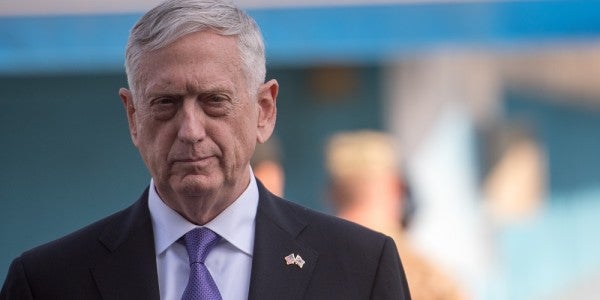 Defense Secretary Jim Mattis on Friday attempted to downplay a recent insider attack in Afghanistan that wiped out two top Afghan leaders in Kandahar and wounded the governor.

“It's a tragic loss of a patriot for Afghanistan,” Mattis said of Gen. Abdul Raziq, the Kandahar police chief who was shot and killed Thursday. “But I don't see it having a long-term effect on our area.”

The Pentagon chief was speaking to reporters on the sidelines of a security conference in Singapore, where he said the officers around Raziq and the security forces have matured, speculating that the loss of their top leader wouldn't have a profound impact on how they operate.

Afghanistan is about to hold legislative elections — which were just delayed by at least a week due to the attack — an event sure to invite even more violence as the Taliban vows to disrupt the polls. Meanwhile, the Afghan security forces that Mattis says are maturing have, in recent months, endured unsustainable losses in combat.

And, as Bill Roggio notes at Long War Journal, the loss of one of Kandahar's top leaders not having repercussions seems to be wishful thinking at best:

The death of Raziq may have major implications on the security situation in southern Afghanistan. Raziq has been the US military’s top ally in the south. During the surge from 2009 to 2012, Raziq was instrumental in mustering his fighters to clear the Taliban from strongholds in Kandahar, as well as in neighboring provinces of Uruzgan and Helmand. As the chief of police in Kandahar, he has kept a lid on the Taliban’s insurgency, which has intensified over the past several years. Raziq hoarded power in the province, and it is unclear if one of his deputies can effectively replace him.

The Taliban has targeted Raziq numerous times in the past in suicide and other attacks. He was targeted because of his influence in Kandahar and throughout the south.

The Taliban hope to destabilize Kandahar as it did Uruzgan after the assassinations of Jan Mohammad Khan, the former governor of the province, in 2011, and his nephew, Matiullah Khan, the provincial chief of police, in 2015. Like Raziq, the Khans stockpiled power. Once the Khans were killed by the Taliban, Uruzgan became one of the most dangerous provinces in the country.

It's not credible to say that losing Raziq doesn't change the game in Kandahar. His death is a huge win for the Taliban; why else would they have tried to kill him so many times in the past?

And let's not forget the fact that this attack happened with American troops right there, to include the top general in charge of NATO troops, Gen. Scott Miller. Clearly in the danger zone, according to CNN's Barbara Starr, Miller drew his pistol as the attack unfolded (he did not fire).

One can only imagine what the ramifications would be (or what Mattis would say in response) if Miller were wounded or killed during such a brazen attack.

Sadly, this is just one example among many demonstrating that neither the Pentagon or the Afghan government can be trusted to tell the truth of what is happening in Afghanistan. From pronouncements such as these or Mattis in May claiming the Taliban was on their “back foot,” to the wholesale censorship of previously-unclassified data on the state of the Afghan security forces, they know the war is, and has been lost for a long time.

But just like the Vietnam war before it, it seems our senior military leadership will need far more time than most of the American public to admit it.