The Department of Defense has identified the Army Green Beret killed in Afghanistan on Nov. 4 as Sgt. 1st Class... 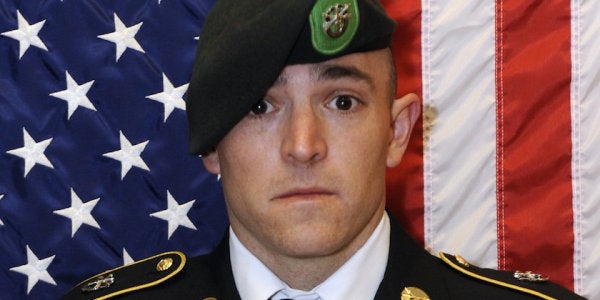 Cribben died of wounds sustained while conducting operations in Logar province, Army Times reports, bringing the total number of troops killed in Afghanistan so far this year to 13. Of those, 11 were killed in combat. The incident is currently under investigation.

This year has seen a slight increase in U.S. casualties in Afghanistan from 2016, during which a total of 9 American service members died as a result of hostile actions. There were 10 U.S. KIAs in the country in 2015, 6 of whom were killed on Dec. 21 in the district of Bagram by a single suicide bomber. Now in its 16th year, the Afghan War has claimed the lives of more than 2,400 American service members, according to the website iCasualties, which tracks U.S. casualties of the War on Terror.

The locations of U.S. casualties in recent years reflect the shifting focus of the U.S. military effort in Afghanistan, as special operations troops more aggressively pursue ISIS targets in the country’s east while conventional forces continue training and advising Afghan national army soldiers to combat a resurgent Taliban elsewhere. For example, Logar, where Cribben was killed, is about 50 miles south of Kabul, suggesting that the Pentagon is following through with its plan to embed U.S. forces closer to the front lines.

It also seems that offensive operations are becoming increasingly concentrated in fewer areas. In 2016, troop fatalities occurred throughout the country, in the provinces of Kunduz, Nangarhar, Helmand, Parwan, Kandahar, and Kabul. This year, seven U.S. service members were killed in Nangarhar, an ISIS stronghold, alone. Two others were killed in Kandahar, and another in Helmand. Cribben is the first American to die in combat in Logar since the spring of 2014.

The Taliban has flourished since NATO combat mission officially ended in Afghanistan in late 2014, seizing huge swaths of the country and inflicting massive casualties on both Afghan national forces and the civilian population. And in August, amid reports from Pentagon officials that the Afghan War had reached a stalemate, President Donald Trump announced that the military was again ramping up operations against insurgent forces in the country, including ISIS, which established a foothold in Nangarhar in early 2015.

“We are not nation building again,” Trump told a large military audience at Joint Base Myer-Henderson Hall in Virginia in August. “We are killing terrorists.”

The president also vowed to “lift restrictions and expand authorities” for troops as their numbers in the country increased by several thousand. As The New York Times noted in late October, there are currently 9,000 U.S. troops in Afghanistan — officially. However, the unofficial account might be closer to 12,000.

As a Special Forces soldier, Cribben may not have been included in that official count. A native of Rawlins, Wyoming, Cribben enlisted in the Army in 2002 and served as a military police officer until attending Special Forces Assessment and Selection course November 2011, according to Army Times.

He graduated from the Special Forces Qualification Course in December 2014, and was on his third combat deployment when he died. His previous tours — to Afghanistan in 2006 and Iraq in 2007 — were as an MP.

“On behalf of U.S. Forces-Afghanistan, we offer our deepest condolences to the family of our fallen brother,” Gen. John Nicholson, commander of U.S. Forces Afghanistan, said in a statement. “Despite this tragic event, we remain steadfast in our commitment to the Afghan people and to support them in our mutual fight against terrorism.”