The alarming history behind Trump’s ’looting’ and ‘shooting’ tweets

Trump’s line about looting and shooting conjures up ghosts from the National Guard's past, such as the shooting at Kent State University in 1970. 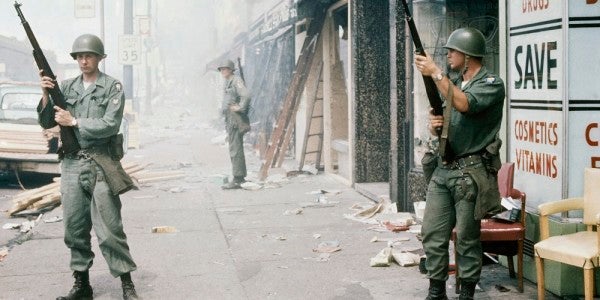 Normally these columns are meant to be lighthearted, but the need has arisen to talk about a subject that allows for no humor whatsoever: When can U.S. troops use deadly force against American civilians?

President Donald Trump tweeted on Friday that he had advised Minnesota Gov. Tim Walz that the military is ready to restore order in Minneapolis and St. Paul, where riots began after 7-minute video emerged on May 25 that showed a white police officer placing his knee on the neck of George Floyd, who is black, even though Floyd clearly says that he cannot breathe. Floyd died shortly thereafter in a hospital. The officer, Derek Chauvin, has since been fired and arrested.

On Friday, Trump tweeted that if Minneapolis Mayor Jacob Frey could not stop the riots, he would “send in the National Guard & get the job done right.”

And in a second message that was flagged by Twitter for allegedly glorifying violence, the president appeared to authorize deadly force for any service members who are mobilized for riot control: “When the looting starts, the shooting starts.”

A Minnesota National Guard spokesman told Task & Purpose on Friday that it does not consider the president’s comments a directive to open fire at looters.

Trump’s line about looting and shooting is an apparent quote of comments made in 1967 by then Miami Police Chief Walter Headley, the Washington Post reported.

But his cavalier reference to troops shooting U.S. civilians also comes just after the 50th anniversary of the shooting at Kent State University, when four students were killed and nine other people wounded after the Ohio Army National Guard opened fire on protesters.

During the 1960s, National Guardsmen also used deadly force several times in efforts to quell riots in cities such as the Watts neighborhood of Los Angeles, Newark, and Detroit.

News pictures from the time showing Guardsmen with World War II-era rifles and gas masks have helped create the public perception that the National Guard was a force of undertrained and trigger-happy pseudo troops that persists to this day, even though the Guard has performed much better in subsequent crises.

After Hurricane Katrina in 2005, many New Orleans police officers walked off the job and the city became a warzone, but the National Guard successfully avoided a violent confrontation when it ended the humanitarian catastrophe at the New Orleans Convention Center.

National Guardsmen have also not had to use lethal force when called upon to respond to riots in Ferguson, Missouri, following the Aug. 9, 2014 police shooting of Michael Brown Jr.; and in Baltimore after the April 12, 2015 death of Freddie Gray while in police custody.

This reporter knows from personal experience how seriously the military takes the issue of when to take a life. In September 2005, I was embedded with soldiers from the 1st Cavalry Division in Texas as part of Hurricane Rita relief efforts.

I listened as the soldiers were told in no uncertain terms that if they were tasked with crowd control, they were not authorized to fire warning shots. If they opened fire anyway and hit someone, they would be prosecuted.

Moreover, my father joined the New York Army National Guard after graduating from college. It’s safe to say that the National Guard has come a long way since the bad old days 50 years ago.

Later on Friday, Trump tried to walk back his tweet by claiming he never meant to imply that troops should shoot looters.

“Looting leads to shooting, and that’s why a man was shot and killed in Minneapolis on Wednesday night – or look at what just happened in Louisville with 7 people shot. I don’t want this to happen, and that’s what the expression put out last night means,” the president tweeted.

Whatever message President Trump meant to send with his tweets about looting leading to shooting, he conjured up ghosts from the National Guard’s past that should not be disturbed.