Why Did The Military Keep A Neo-Nazi Marine But Boot That ‘Commie Cadet’?

Editor's note: Since publication of this article, the Marine Corps has confirmed that Lance Cpl. — now Pvt. — Vasillios... 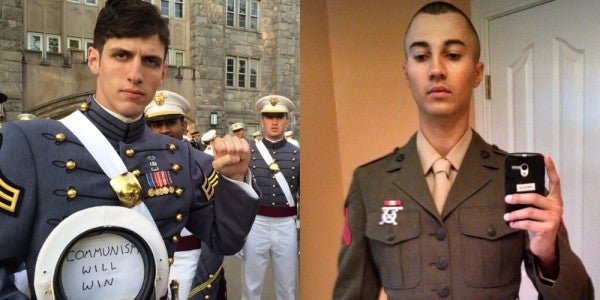 Editor's note: Since publication of this article, the Marine Corps has confirmed that Lance Cpl. — now Pvt. — Vasillios Pistolis is slated for administrative separation from the service; under that scheme, he can be dismissed under honorable, general, or other-than-honorable conditions, but will not receive a dishonorable discharge or a criminal record. Pentagon reporter Jeff Schogol has the full story here.

Why did the U.S. military decide to hold onto a vocal and violent neo-Nazi buck Marine, but kick out a combat-tested Army officer for his embrace of communism?

On Monday, Task & Purpose reported that Army 2nd Lt. Spenser Rapone was slapped with an other-than-honorable discharge (and potentially $300,000 in West Point tuition repayments) after a photo went viral last September of him as a West Point cadet with the words “Communism Will Win” written in his cover. Rapone became a target of ire from conservative activists and even lawmakers; he saluted Fort Drum with a middle finger as he left on June 19.

That same day, the Marine Corps announced that Lance Cpl. Vasillios Pistolis was found guilty at a summary court-martial and hit with 28 days confinement, a reduction in rank, and pay forfeiture — yet he will remain a Marine upon his release. Pistolis’ crime? Attacking a protester while marching alongside white supremacists as a member of the neo-Nazi Atomwaffen Division during last year’s “Unite the Right” rally in Charlottesville.

If these seem like disparate punishments, you’re not wrong. While the details of the services’ investigations into Rapone and Pistolis remain murky, DoD regulations prohibit service members from any activities or organizations associated with extremist behavior like, say, physical violence in the name of ideology. And according to retired Col. Don Christensen, a former Air Force chief prosecutor and president of the legal advocacy group Protect Our Defenders, the gulf between the two service members’ infractions and their actual sentences represents “a bizarre false inequivalency.”

“I’m in no way a communist sympathizer, but this just seems like such overkill for Rapone, but they’re not really doing much for [Pistolis] ” Christensen told Task & Purpose. “Sure, the other guy is going to jail for 28 days, but I have to assume that West Point leadership knew of Rapone’s views.”

He added: “To allow him to be commissioned and then turn around and charge him is just wrong.”

The main difference between the two service members, Christensen said, is a question of violence. Indeed, Pistolis bragged about assaulting a woman, an act captured by photographers; but Rapone’s crimes — flashing a Che Guevera shirt and sneaking a secret lefty message into his combination cover — doesn’t rise from the level of speech to “activity” in the eyes of the UCMJ.

“Holding political views is one thing. Acting on them in the way that the other guy did is another,” Christensen said. “You can’t be a communist without calling for the violent overthrow of the American government, which makes me think he’s more communist-leaning than an actual communist.”

Vasillios Pistolis clubs a man with a wooden flagpole during the deadly white supremacist rally in Charlottesville on Aug. 12, 2017.Samuel Corum/Anadolu Agency/Getty Images

Beyond action, the nature of Rapone and Pistolis’ respective ideologies means they land differently among DoD regulations regarding equal opportunity for all service members.

“Advocating for one economic system isn’t the same as being outright racist — and it’s hard to argue that someone with a swastika isn’t advocating a belief that’s racist and violent,” Christensen said. “Someone can believe in one economic system without being racist, and that to me is the real key. There’s nothing inherently racist about communism, wherein Nazism is inherently racist. It’s just a bizarre.”

Indeed, the cases of Pistolis and Rapone almost appear to be an inversion of the old maxim of “different spanks for different ranks,” the ubiquitous sense that officers get a pass from the justice system while enlisteds get screwed into the ground. Rapone, an officer, was railroaded compared to Pistolis, who never even earned the blood stripes of a junior Marine NCO.

“At the end of the day, it really is a strange instance of moral inequivalency,” he added. “And it would be really, really bizarre for [Pistolis] to have done what he did and for them to let him stay in.”