Former Pentagon Spokesman: This Is Not An ‘Invasion’ — And The Military Doesn’t Need To Go To The Border

Over the past 17 years, the U.S. military has answered the bell, time and time again. It has been at... 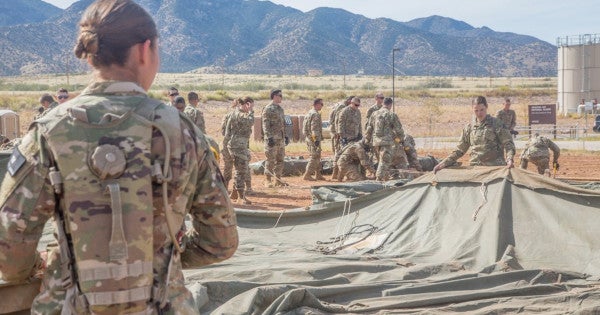 Over the past 17 years, the U.S. military has answered the bell, time and time again. It has been at war for the longest continuous period in our nation’s history. It has won victories and suffered losses, most significantly in lives lost and wounded. Many of our servicemen and women are forever changed by the wounds of war, both seen and unseen. We have asked much of them, and their families, and they have come through, each and every time.

They will answer the bell once again, with this deployment to the southwest border, but they shouldn't have to. The involvement of active duty troops is both unnecessary and inappropriate.

First and foremost, the border security mission is a law enforcement one and active duty military forces are prohibited by law from conducting domestic law enforcement activities. The troops being dispatched to the border are in a support role only. Is there value in that? Perhaps, but not at the costs I’ll describe below.

Second, this caravan of poor migrants and refugees is not a national security threat to the United States.

Its size — at this point — may be a bit different than what we have seen recently but it is not unusual. Large groups of migrants travel north to the U.S. every year. This is not an “invasion.”

Yes, we should have secure borders but that’s a mission for the Department of Homeland Security and Customs and Border Protection. It’s a mission their law enforcement professionals conduct every day, for which they are highly qualified and specially trained.

Even if there are some caravan members with criminal records, CBP officers handle individuals like them every day. Deployed service members won’t be interacting with anyone in the caravan, except in rare circumstances, so they won’t be protecting us against “dangerous people.” By law, they can't detain or arrest anyone, and they certainly won’t be using deadly force against people throwing rocks.

Third, Secretary Mattis has rightfully recognized that after 17 years of mostly counterterrorism operations, our military needs to refocus and prepare for the next war or contingency, not the last one. That means training for full-spectrum operations, something none of the thousands of troops deployed to the border will be doing. This ill-advised deployment takes them away from their homes, their families, their regular duties and their training for future contingencies.

Simply put, Secretary Mattis’s focus on lethality and combat readiness won’t be served by this deployment.

While we still have military forces in Afghanistan, Iraq, Syria, and other places around the globe, the numbers of those deployed away from home are significantly reduced from what they were at the height of operations in both Afghanistan and Iraq. Rotations still tax the force as units either rest and recover from a recent deployment or prepare for the next one. So the strain on the force remains, even at reduced numbers.

Remember too that sequestration and budget cuts during a period of high operational tempo had a negative impact on equipment, maintenance and procurement. A military both “recovering” from the effects of 17 years of war and still engaged in dangerous operations, with commensurate impacts on people, equipment and training, shouldn't be asked to undertake an unnecessary mission for which they are not absolutely needed, based on a clear threat to our national security.

Leaving aside the obvious political elements and questions about this deployment being a “stunt,” it does not meet that threshold.

Finally, there should be no doubt that the servicemen and women deployed to the border will carry out their assigned duties to the best of their abilities. They remain the finest fighting force the world has seen.

That’s why they shouldn't be (mis)used as an adjunct immigration enforcement force, or as political pawns. They won’t ask for a break, but they certainly deserve one.

David Lapan is vice president of communications at the Bipartisan Policy Center. His career in public service spans more than three decades, with service in the U.S. Departments of Defense and Homeland Security.

Lapan is a retired Marine colonel, with more than 30 years of military service and 22 years of communications/public affairs experience at the highest levels of the Defense Department.

As a public affairs officer, he served as a spokesman and advisor for the Defense Department; for the 18th chairman of the Joint Chiefs of Staff; for the commander of the International Security Assistance Force (ISAF) and U.S. Forces—Afghanistan; and for multi-national forces during military operations in Haiti and Iraq.