Trump raises questions about killing vs. murder by embracing US troops accused of war crimes

"There's a difference between killing somebody with the discipline that is inculcated through military training and throwing all that training away and just becoming a commonplace murderer. When we act no better than ISIS, we should not be surprised that we have trouble finding allies or cooperation from local people." 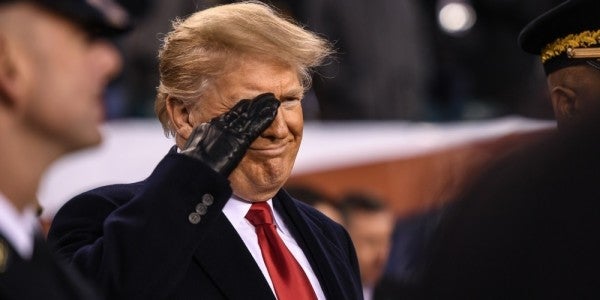 President Donald Trump's affection for the military runs so deep that he has repeatedly served as an advocate for service members accused or convicted of murder.

Not only has he pardoned a former Army lieutenant who was convicted of killing an Iraq detainee, the president has also voiced support for two other service members accused of murder while their cases are still pending.

On May 6, the president pardoned Michael Behenna, who had served prison time after being convicted of killing an Iraqi detainee in 2008. Oklahoma's attorney general had requested a pardon for Behenna last year, arguing that prosecutors had withheld evidence supporting Behenna's claim that he killed the detainee in self-defense, according to the Associated Press.

“Killing a prisoner you've stripped naked and threatened with a gun ain't a moral or lawful act: It's murder,” VanLandingham told Task & Purpose. “One pardon of such a war crime isn't a pattern, and hopefully such pardon will be the only such condonation of a war crime that many, many other soldiers and Marines and sailors in Behanna's shoes had greater moral courage and integrity not to commit.”

VanLandingham said she is more troubled by the president's support for former Special Forces Maj. Matthew Golsteyn and Navy SEAL Chief Eddie Gallagher because their cases have not gone to trial yet.

After the Army charged former Golsteyn with murder for allegedly killing an unarmed suspected Taliban bomb-maker, Trump tweeted in December that he would personally review the case and called Golsteyn a “U.S. military hero.”

The president also had Gallagher released from the brig after eight months of pretrial custody by tweeting in March that Gallagher should be moved to a “less restrictive environment.” Gallagher is accused of stabbing a wounded ISIS fighter to death and other crimes.

Trump's actions have undermined the authority of commanders overseeing the Gallagher and Golsteyn cases and have weakened the military justice system overall, VanLandingham said.

“The more Trump meddles, the more he undermines that system as being impartial and fair,” VanLandingham said. “Not letting the system, with all its safeguards for the accused, run its paces risks hurting those courageous sailors and soldiers who did the right thing and are willing to testify against an alleged murderer in their ranks. That's very, very dangerous for our military justice system and more importantly the military and our national security.”

White House officials did not respond to requests to comment for this story.

Perhaps unsurprisingly, Gallagher's civilian attorney Timothy Parlatore said he believes the president's support for his client has helped ensure the proceedings will be fair.

The Navy released Gallagher from the brig based solely on the president's tweet, Parlatore told Task & Purpose. That allowed Gallagher to finally review the evidence against him and speak to his attorney on a regular basis.

“Aside from finally allowing us the ability to prepare for trial and for Eddie to participate in his defense, [Trump] is certainly not affecting the conduct of the prosecution or the judge,” Parlatore said.

Rep. Duncan Hunter (R-Calif.), a Marine veteran, argues the president's support is vital for Gallagher, Golsteyn, and other combat veterans charged with serious offenses to have an even playing field when their cases are adjudicated.

“I don't think it hurts anything at all,” Hunter told Task & Purpose. “I think it peels back the curtain on what is an unfair system.”

Hunter, who has been indicted in federal court for allegedly misusing campaign funds, said the overriding issue that makes the military's justice system broken is that troops who have fought the Taliban, ISIS, and other terrorists are second-guessed by defense officials who lack relevant combat experience.

“Less than 1 percent of the military right now sees combat,” Hunter told Task & Purpose. “When they're being judged by people that have either never seen combat, will never see combat, or saw a different kind of combat, that's an extremely prejudiced viewpoint from the bureaucrats, lawyers, and investigators that are back here in the United States judging somebody that was in a combat situation overseas and trying to render a verdict that's completely out of context. You see that over and over again.”

However, the military has learned that abiding by the rules of war is better for U.S. service members and leads to success on the battlefield, said retired Army Lt. Col. Jason Dempsey, with the Center for a New American Security think tank in Washington, D.C.

Killing innocent civilians makes it harder for the U.S. military to persuade local populations that U.S. troops are on their side, said Dempsey, who deployed to Afghanistan twice and once to Iraq.

“There's a difference between killing somebody with the discipline that is inculcated through military training and throwing all that training away and just becoming a commonplace murderer,” Dempsey said. “When we act no better than ISIS, we should not be surprised that we have trouble finding allies or cooperation from local people.”

Rep. Seth Moulton (D-Mass.) is no stranger to combat, and he is most proud of the Marines he led during four deployments to Iraq who had the moral courage to abide by American values in the most challenging times.

“Among those core American values is that nobody — from private to general, from teenager on the streets to the commander in chief — is above the law,” said Moulton, who is one of the more than 20 Democrats running for president in 2020.

“The president's recent pardons are a pattern,” Moulton continued. “They demonstrate he's chosen to trust convicted criminals over the honorable men and women who heard their cases. By doing so, the president has calculated that he will buy the support of the millions of veterans who, unlike him, volunteered to go to war and found the moral courage to serve honorably. He clearly doesn't understand moral courage or American values, and it's demeaning to the vast majority of American military heroes who always upheld both.”