President Donald Trump has thrown the U.S. military and defense establishment into disarray in the span of just two weeks... 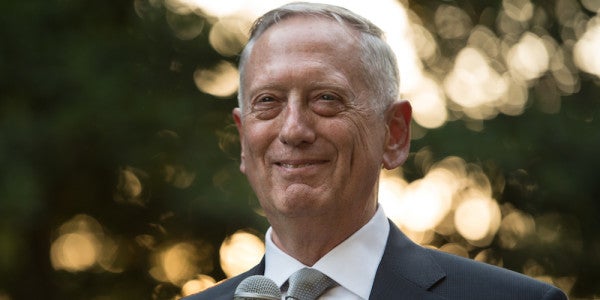 President Donald Trump has thrown the U.S. military and defense establishment into disarray in the span of just two weeks with the dual humiliatingoustings. But at least one of Trump’s vaulted generals is sitting (relatively) pretty and with an approval rating only a touch under the Prez: Secretary of Defense James Mattis.

A new poll from Politico conducted between March 15 to March 19 — right in the middle of the president’s tweet-firing of Secretary of State Rex Tillerson — found Mattis is the most approved-of member of Trump’s cabinet. Thirty-five percent of respondents saying they’re happy with his performance, while another 19% are not (another 24% had never heard of him). By contrast, the Washington Examiner points out that eight of Trump’s 18 cabinet secretaries are more hated than like. VA Secretary David Shulkin, in particular, had a 20% favorable rating and a 23% unfavorable; in Trump’s own case, the split is more like 43% to 51%.

The removal of Lt. Gen. H.R. McMaster on Thursday has reportedly left White House staffers rattled — and with good reason. Trump replaced McMaster, an unparalleled strategist renowned for his victory in one of the fiercest tank battles in military history, with President George W. Bush’s ambassador to the UN, John Bolton, who earned his reckless reputation pushing the disastrous invasion of Iraq in 2003. Taken with Tillerson’s replacement CIA director Mike Pompeo, the move might signal an acceleration of Trump’s aggressive military strategy beyond what Mattis and Chief of Staff John Kelley can control.

Related: John Bolton Should Be Ashamed Of Himself. But That Would Require A Sense Of Shame »

Amid the chaos, Chaos is standing his ground. Despite the fact that rising tensions between the commander-in-chief and Mattis over everything from Afghanistan to transgender troops to climate change, observers of the national security establishment recognize that Trump’s preference for military might over diplomacy (see the hollowing out of the State Department) puts Mattis in a unique position: Trump needs him more than probably anyone else in his administration.

Why has Mattis survived so long? Politico White House correspondent Eliana Johnson put it best: Chaos “seems to know how to disagree with the president and get away with it.” No leaked comments about Tillerson secretly calling Trump a moron, no shitting on the commander-in-chief to the press: just quiet respect for the office without fawning like a complete sycophant. “We all have an obligation to serve,” he told reporters in August 2017. “That’s all there is to it. And so, you serve.”

Firing Mattis — and humiliating him, just as he did Tillerson — would hurt Trump not just with average Americans, but almost certainly with troops and veterans. And Trump, who has staked his political identity on martial power despite his Vietnam-era bone spurs, needs him by his side as a surrogate and responsible adult on matters of the Forever War.

Related: Mattis Gave A Remarkable Response When Asked Why He Continues To Serve Trump »

Indeed, in one of Mattis’ rare public appearances alongside Trump during latter’s signing of a $1.3 trillion omnibus bill on Friday, the president explicitly endeared himself to Mattis despite his behind-the-scenes fury. “There has never been anything like we’ve been able to do,” Trump said before asking Mattis to address the legislation. “Our military is very depleted but it’s rapidly getting better, and in a short period of time it will be stronger than it’s ever been.”

Mattis responded in kind. “In 1790 in George Washington’s first annual address to Congress, he stated to be prepared for war is one of the most effective means of preserving the peace,” Mattis responded. “Together we are going to make our military stronger than ever. We in the military are humbled and grateful to the American people for their sacrifices on behalf of this funding.”

Mattis is not a perfectperson, but he’s a fine example of holding steady course defined by respect, dignity, and responsibility amid choppy waters. And that may end up saving his future as Trump administration’s firm hand on the rudder — for now.