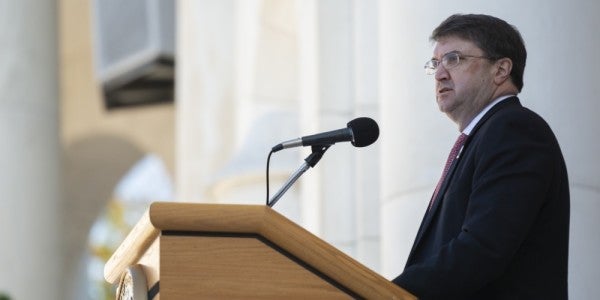 In a 1995 tribute to Confederate President Jefferson Davis, current Veterans Affairs Secretary Robert Wilkie attempted to reinvent history to make the South – which started the Civil War to keep millions of slaves in chains – was the victim of Northern aggression.

First reported by CNN, Wilkie made the June 3, 1995 speech to mark Davis’ birthday. At the time, Wilkie was serving as legislative director for Rep. David Funderburk (R-N.C.).

In his speech, Wilkie failed to acknowledge that the Confederacy began the war by firing on Fort Sumter. Nor did he mention Confederate atrocities, such as the Fort Pillow massacre, when Southerners murdered more than 300 African-American troops who fought for the Union.

Indeed, in recounting Davis’ life, Wilkie portrayed opponents to slavery as anarchists whose contempt for individual liberty led to war, according to a transcript of his speech, which was published in the August 1995 edition of the United Daughters of the Confederacy Magazine.

“They were as mendacious as the Jacobins of Revolutionary France which placed power and rule of the chosen above local autonomy and individual rights. Davis saw in their ascendancy an invitation to the tyranny of the mob and the street justice of the guillotine. Like all conservatives, he fought them with everything in his power.”

Wilkie said he was no apologist for the Confederacy, but he also attempted to recast slavery as a national problem – in effect absolving the South for going to war to protect it.

“The South has many warts. Chattel slavery and its aftermath is a stain on our story as it is a stain on every civilization in history,” Wilkie said. “But slavery was a collective American tragedy. Lincoln understood there was enough guilt to be spread from Maine to Key West. To view our history and the ferocity of the Confederate soldier solely through the lens of slavery and be the slovenly standards of the present is dishonest and a disservice to our ancestors.”

In his speech, Wilkie portrayed Davis as a Southern nationalist who, “Was warm and genuinely affectionate to his wife, and to women, children and slaves.”

Wilkie’s defense of Davis leading an insurrection of slave masters is both unique and misleading because it ignores that slavery was casus belli for the troubles between 1861 and 1865.

“He accepted the natural tragedy of life and the limits of man's power to alter nature's order,” Wilke wrote. “And for the first three-and-a-half years of the war, that order included a defense of the institution of slavery, particularly as it pertained to the south's ability to determine its own destiny.”

Wilkie also tried to portray Davis as a compassionate warrior, especially compared with his Northern adversaries.

“Davis abhorred the notion of total war,” Wilkie said. “The idea of waging war in civilians affronted his dignity as a soldier and a gentleman. When offered the opportunity to plant bombs in the factories of the North he refused. When given the opportunity to take the War to the people of Maryland and Pennsylvania, he issued orders that violators of civilian peace were to be arrested and drummed out of the Confederate service. It was up to the Yankees Sherman and Sheridan to hold the first classes in the bloody practice of modern warn. Their lessons were not lost on their many disciples in our horrific century.”

“I am not saying Lincoln was wrong. I only point out what happens when the politically correct myth – Davis the cold hearted versus Lincoln the compassionate — rubs hard against reality,” Wilkie said.

A VA spokesman told Task & Purpose on Friday that Wilkie and other Republican officials participated in events recognizing the Civil War years ago.

“Most of these events occurred in the 1990s and were government sanctioned, and attended by Republicans and Democrats,” said Curt Cashour. “The events were strictly historical in nature, and as Secretary Wilkie said at his confirmation hearing in June, he stopped participating in them once the issue became divisive.”