"This is not a partisan political issue. This is a human issue" 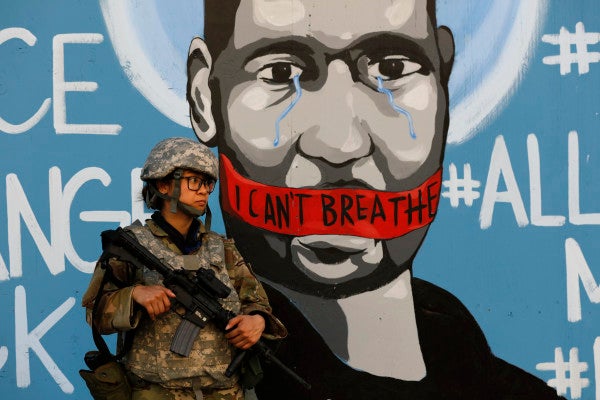 There is a myth in the U.S. military that once you put on the uniform, “We all bleed green.” That is to say, no matter where you’re from or what your background is, as long as you work hard, you will make it to the top. But now, data and statistics are starting to capture what many of us have always known: military service looks different for minority communities, and simply ‘working hard’ won’t undo the systemic racism, homophobia, sexism, and xenophobia at the core of the U.S. military experience.

The recent death of George Floyd at the hands of a white police officer in Minneapolis has once again thrust issues of systemic racism into the national spotlight, leading to widespread justifiable demonstrations in support of the #BlackLivesMatter movement. A huge number of corporations and nonprofits have made vigorous statements affirming their stances on this issue, including many who have made concrete commitments to examine and improve internal practices through action as opposed to just words.

But noticeably lagging in leadership in this profoundly important moment have been the ‘big six’ veteran service organizations (VSOs) that have mostly chosen not to address the issue of racism in America and in the veteran community.

Some, including Vietnam Veterans of America, have not as of yet issued statements. The American Legion, Veterans of Foreign Wars, Disabled American Veterans, and AMVETS all released initial statements that focused as much on vandalized memorials, civil unrest, and property damage as much as the existing systemic inequalities that led to the protests. AMVETS later followed with a more direct call for justice on Twitter, and VFW posted a general call for equality, inclusivity, and diversity — without mentioning Black lives — on Facebook.

Not all abdicated the responsibility to speak plainly; for example, Paralyzed Veterans of America and Wounded Warrior Project (though not one of the “big six,” WWP has the highest revenue of any veteran-serving non-profit) both made explicit statements in support of Black Americans. And many smaller and newer organizations have spoken out more publicly and boldly in support of their Black constituents and members.

The sad reality is that none of the largest and oldest organizations in this country for serving veterans have made statements as informed, clear, and direct as that of ice-cream makers. None have made concrete commitments to elevate Black voices or donate to Black-led community groups like a community-supported fishery. None have acknowledged how they may have contributed to systemic injustice and committed to specific actions toward becoming an anti-racist organization as did an athletic app.

It is frankly embarrassing to see an abdication of moral leadership on this issue in the veteran community, and the silence becomes more glaring as multiple military leaders have made direct and compelling statements addressing the presence of racism and calling on their own organizations to do better. This is not a partisan political issue. This is a human issue.

For years, organizations like the National Association for Black Veterans alongside activists, and individuals have sought to talk about how race, gender, sexual orientation, and religion impact veterans, only to be met with defensive and fragile responses. Many who advocate for the unique needs of minority veterans are no strangers to the phrase, “those issues don’t belong here,” when interfacing with traditional Veteran Service Organizations.

It’s unfortunate, since research shows that minority veterans experience disparities in terms of unemployment, poverty, homelessness, and more as significantly higher rates compared to their non-minority peers. The data indicates that these issues actually do belong here and that they deserve to be elevated and supported across the entire military-connected community.

Issues such as #BlackLivesMatter and the movement for justice in the case of George Floyd are incredibly relevant to our community as police violence claims the lives of Black veterans every year. Since 2018, at least six Black veterans have been murdered by police. Just last month, Air Force veteran Dreasjon Reed live streamed the final moments of his life as police chased and fatally shot him. These issues are our issues.

Organizations that serve veterans should learn from the thoughtful, well-reasoned, but powerful statements issued by other organizations and directly acknowledge the existence of racism in our community. Leadership in this moment must acknowledge that racism has been and continues to be a persistent problem in the military and has become pervasive in the veteran community. There cannot be a question in this moment as to whether or not any of us as leaders proclaim that Black lives matter. Now is the moment for us to shout unequivocally that Black lives do matter.

Words alone will not be enough to undo racism in our community. Words must be followed with an organizational commitment to change through taking steps to eliminate discrimination within the ranks and serve as an example in broader society.

Black Americans fought in World War I, only to be lynched for wearing their uniforms home. In World War II, Black Americans fought Nazis abroad, only to be met with white supremacy when they came home, a “two-front battle” that was repeated as they continued “fighting on two fronts” during Vietnam. Rather than stand up for their Black brothers and sisters, some VSOs perpetuated discriminatory practices. Young veterans are more diverse than ever, and many are abandoning these organizations. Now is the time for action — it is an opportunity to fight for change both inside and outside their organization that veteran leaders cannot squander again.