If you read that recent Military.com story about the Air Force's efforts to engineer a new coffee mug and thought … Continued 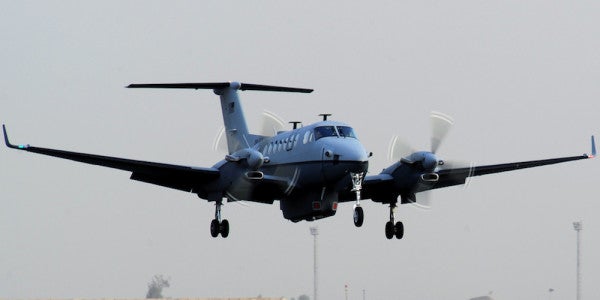 If you read that recent Military.com story about the Air Force's efforts to engineer a new coffee mug and thought to yourself “why do these horrible mugs cost some $1,200 apiece of my hard-earned tax dollars,” we have a relatively simple answer: a spill can be a complete disaster — especially if it's Red Bull.

The eagle-eyed aviation pros at The War Zone spotted an unusual accident in Military Times' sprawling database of aviation mishaps detailing how a 16oz can of Red Bull and an MC-12W Liberty spy plane that resulted in more than $100,000 in damage to the aircraft.

Here are the key details, per a mishap summary obtained by The War Zone via Freedom Of Information Act request:

This is exactly why the Air Force engineers $1,200 mugs: to prevent some sort of unanticipated fluid-related incident from catalyzing a potential catastrophic mishap. As my T&P colleague Brad Howard, an Air Force vet who has actually flown on the MC-12W before, told me: Everything that enters the cockpit of a $38 million aircraft needs to be highly engineered to not, y'know, cause fires or generate static electricity that may screw with controls.

The most likely cause of the mishap? The copilot probably opened a shaken Red Bull can that was in his helmet bag right over the console. Indeed the War Zone notes that the incident ” might have earned them some sort of disciplinary action,” but those proceedings were heavily redacted in the report.

OK, OK, we'll say it: Red Bull does not give you wings. But my boy Howard has a solution to prevent these problems in the future: Big Safari, the legendary shadowy wizards behind quick fixes, could modify a Bass Pro Shop 32oz mug to fit into the MC-12W cup holders for a cool $2 million tops. Either that or the sensor operators should be put in charge of snack duty. Just sayin'