Editor’s Note: The following story highlights a veteran at BrightView. Committed to including talented members of the military community in... 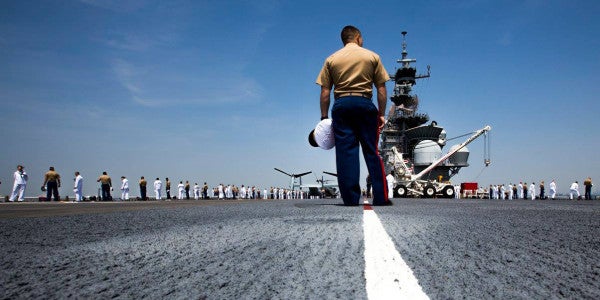 Editor’s Note: The following story highlights a veteran at BrightView. Committed to including talented members of the military community in its workplace, BrightView is a client of Hirepurpose, a Task & Purpose sister company. Learn more here.

BrightView’s Gregory Jacquin knows what it takes to adapt, persevere and overcome to achieve high aspirations. His journey — from serving in the United States Marine Corps to taking on the role of senior vice president of the country’s leading commercial landscaping company — didn’t happen overnight; it was an uphill climb that took years of hard work, humility and personal sacrifice.

After graduating from the University of Mississippi, Jacquin struggled to find direction and purpose.

“I was thrilled to have a degree, but I lacked a future plan on how to use it,” Jacquin said. “It was a tough time for me. I had a great sense of accomplishment, but something was definitely missing.”

A vision began to materialize when Jacquin’s father-in-law shared his story of becoming an officer in the Marine Corps after graduating from college.

“He didn’t make a career out of it, but he spoke about how it helped him mature very quickly,” Jacquin said. “He spoke very highly of his experience, and it definitely piqued my interest. I started researching all of the branches to potentially serve as an officer.”

“Our veterans have been tested over and over in some of the most difficult circumstances anyone could ever imagine. Those skills and lessons learned while serving are very transferable in today’s world.”

Inspired to follow in his father-in-law’s footsteps, Jacquin visited a Marine Corps recruiter to discuss his options. The meeting didn’t go as well as he had hoped.

“He basically said, ‘Thanks, but no thanks. You don’t have what it takes. Your grades aren’t good enough, and you’re not there mentally or physically. We only accept the best,’” Jacquin said. “That obviously stuck with me and was a real challenge. I wondered if I really had what it takes to join the Marines and to serve my country.”

Instead of snuffing out his dream, the recruiter’s disheartening initial rejection only added fuel to Jacquin’s fire.

“I kept going back and asking more questions. The more I learned about the Marines and the history of how and where they have defended our country, the more I wanted in,” he said.

Jacquin opted for enlisting and accomplished his original goal when he was accepted into the officer selection program a few years later.

“It was a tough road and OCS was brutal, but it was all worth it. Getting to serve this great country as a Marine officer was an unbelievable experience and one that I will cherish forever,” he said.

After transitioning out of the military, Jacquin proceeded to accomplish the goals he set for himself while leading teams in the corporate world. Now, Jacquin is proud to continue serving communities every day at BrightView.

“The veterans who work for us do very well. Continuing to challenge them with new and exciting opportunities helps.”

“Our customers are the community itself, whether business offices, housing communities, hospitals, universities, large corporations or locally owned small businesses. We are out there in those communities making a difference every day with the services we provide,” Jacquin said. “We take pride in knowing that we operate in a space that our customers really take seriously: where they live and where they work.”

Jacquin was first drawn to the idea of continuing his career at BrightView based on positive feedback he received while networking.

“I knew a number of former colleagues that went to work for BrightView,” he said. “They really liked it, and when we would catch up, I always asked tons of questions about the company. It was an exciting prospect – the company was created when the two largest leaders in the landscape industry came together as one.”

Ultimately, Jacquin credits his military career for equipping him with many of the skills and experiences that helped him stand out in the crowd of applicants.

“The Marine Corps really does a great job of breaking down an individual, removing them from the ‘just me’ mindset, then building that individual back up into a ‘team first’ mentality,” Jacquin said. “Along that journey, they teach valuable leadership skill sets used to affect the overall performance of the team in a positive way.”

According to Jacquin, “Our veterans have been tested over and over in some of the most difficult circumstances anyone could ever imagine. Those skills and lessons learned while serving are very transferable in today’s world. They will help you stand out and be a valuable asset to the company that chooses you and the people you are chosen to lead.”

“The ability to adapt to ever-changing conditions, make quick decisions when things are chaotic, follow through no matter what the circumstances, take ownership of mistakes and use those experiences to get better as a team – these are skills taught in the military that also are very effective in today’s corporate environment, especially in the demands of a service industry,” he said.

“Don’t second guess yourself thinking that the transition from the military to a new career is not in the cards.”

Recognizing the inherent value in veteran employees, a top priority for BrightView is to recruit, retain and provide excellent resources for service members looking to begin a new career after the military.

“Retaining these individuals is key for us. A majority of the veterans who work for us do very well,” Jacquin said. “Continuing to challenge them with new and exciting opportunities helps ensure we retain these talented individuals.”

One way the company strives to accomplish this goal is by grouping employees into effective client service teams.

“The structure is very similar to a unit in the military and can be very attractive to our veterans. It is grounded by entry-level leadership positions that can pave the way to future opportunities by having positive and lasting effects on our people who ultimately drive our business results,” he said.

If you are a service member looking to transfer your valuable skills and experiences to a rewarding career outside of the military, Jacquin is cheering you on.

“Take the bull by the horns! Corporate America is always looking for talented leaders that can have a positive impact on people and results,” he said. “Don’t second guess yourself thinking that the transition from the military to a new career is not in the cards.”

When you feel discouraged by a recruiter’s rejection, be inspired by Jacquin’s journey. Turn the disappointment into fuel to adapt, overcome and persevere.