Wounded warrior climbs the ladder at The Home Depot 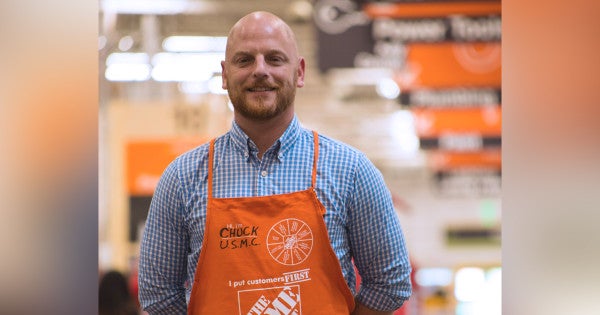 Editor's Note: The following story highlights a veteran at The Home Depot committed to including talented members of the military community in its workplace. The Home Depot is a client of Hirepurpose, a Task & Purpose sister company. Learn More.

In 2004, Charles Segel was sitting at a park contemplating his future when a Marine Corps recruiter approached and asked if he needed a job. Segel was immediately interested – he had left high school early to start working but was ready for an exciting change. Three months later, he was in boot camp, training to be an infantry machine gunner. And almost three years later, the most memorable day of his service arrived without warning.

Segel was in Iraq on his second combat tour, completing a routine patrol with his team. Although many days consisted of distributing humanitarian aid and soccer balls, this day was one of the many spent searching for IEDs, weapons caches, and wanted individuals. Segel's group was searching for a sniper who shot and injured a fellow Marine three days earlier. As they approached the sniper's location, Segel felt an armor-piercing round slice through his protective vest and enter his abdomen, while a second shot grazed his arm. Sadly, another member of Segel's was fatally wounded.

Segel was quickly transported out of Iraq for multiple intensive surgeries in Germany and the U.S. before returning to service 6 months later. However, it took years for his damaged abdominal muscles to fully heal. Despite the physical pain of his recovery, Segel says the most difficult part of his experience was psychological.

“It's difficult to explain the brotherhood that is created under those circumstances,” Segel says. “The hardest part about being injured and sent home is people you know are still in harm's way, and you can't do anything about it.”

Out of the Marine Corps and into a Financial Crisis

After recovering from his injury, Segel decided not to re-enlist, and completed his service by supervising infantry machine gunner training. But, in the midst of the 2008 financial crisis, he found his job search more challenging than he'd expected.

“Nobody was hiring. It was a bad time to look for a job,” Segel recalls. “I thought I could just walk up and say, 'I just got back from Iraq. Please hire me.' And that wasn't the case at all.

Segel eventually found work as a fry cook, and quickly rose into restaurant management. However, he found the job unsatisfying, and the late-night/weekend hours were incompatible with his young family. In 2017, he began searching for a new job.

He applied at The Home Depot because of their competitive benefits package, success as a business, and flexible work options. He was hired in February of 2018, and six months later, Segel was promoted to receiving manager at a The Home Depot store near Atlanta, Georgia.

As the shipping and receiving team leader, and at times the manager on duty, Segel uses the time management, multitasking, and decisive leadership skills he developed in the Marine Corps on a daily basis. He says being wounded in action permanently shaped his decision-making skills.

“Decision-making becomes different because you don't necessarily sit around and contemplate; you simply make a decision and run with it because you may not have the time to sit and wait,” Segel says. “It sounds easy. But real decision-making skills, especially in the line of management, that's not something everyone has the ability to do. You get that from the military.”

What Segel enjoys most about his work at The Home Depot is the same as what he enjoyed most in the Marine Corps: the sense of teamwork and camaraderie.

“The camaraderie that I had in the military, it's also present at The Home Depot,” Segel says. “We are a close-knit group, and I really enjoy that. Enjoying the people I work with, the high fives, and building valuable relationships with colleagues is what I lost when I left the military.”

This camaraderie goes beyond high-fives to an emergency financial assistance fund which employees contribute to throughout the year. Additionally, veteran co-workers can easily connect with one another because The Home Depot gives veteran employees distinctive apron badges to wear on their orange aprons and also encourages them to write their branch of service beneath their names.

“Every day I'm on the floor, someone says something to me about that: 'Thank you for your service,' or 'Oh, you served in the Marine Corps. What unit were you in? Oh, I was in this unit,'” Segel says. “It's one of those little things that makes a big difference in terms of happiness at work.”

Segel volunteers with The Home Depot's Military Appreciation Group, which organizes appreciation events for Memorial Day, Veterans Day, and other occasions. This year, Segel attended a Memorial Day event in which Home Depot associates gathered at the corporate headquarters in Atlanta to pay respects to veteran associates who have passed.

Segel also volunteers for Team Depot, The Home Depot's associate volunteer program, at community service events that benefit veterans. In 2018, Team Depot volunteered over 100,000 hours nationwide, and since 2011, Team Depot and The Home Depot Foundation have renovated, repaired, or built more than 40,000 homes and facilities for veterans.

“To go to a veteran who's stuck and can't do anything with his house, or can't get in and out of it, or sits on his porch and stares at his front yard and wishes he could plant flowers…to be able to go in there and do that for them, it's meaningful to me. And it's meaningful to work for a company that does that.”

The Home Depot employs more than 35,000 veterans and seeks to increase this number through collaborations with military organizations and military hiring events.

“I would research every available job, because there's so many of them. Then decide what you want and prepare for the interview.” Segel advises job seekers. “Don't be afraid to take an entry-level position to get your foot in the door. Just show them what you can do, and you'll move quickly to wherever you want to go.”