"You just can't give up after the military. A lot of veterans go that way, then they lose that sense of belonging" 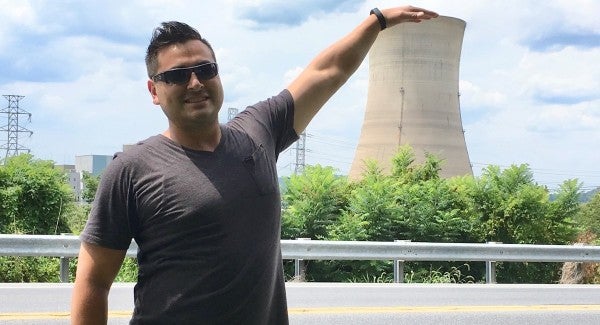 Editor’s Note: The following story highlights a veteran at Exelon committed to including talented members of the military community in its workplace. Comcast is a client of Hirepurpose, a Task & Purpose sister company. Learn More.

A civilian job after military life may sound easy at first. There are no early-morning PT sessions and formations, so a regular 9-to-5 job may seem like a dream. But giving up the discipline, organization, and skills you learned in the military will not do you any favors in civilian life. Veterans will be more successful if they approach a civilian job with the same high level of work ethic they were taught in the military.

That’s the advice of Jacob Leonard, a former Marine who now works as an accountant at Exelon, supporting the company’s nuclear energy generation division.

“Don’t drop your pack,” he says. “You just can’t give up after the military. A lot of veterans go that way, then they lose that sense of belonging.”

Leonard spent five years in the Marine Corps, working as an Air Traffic Controller and Expeditionary Airfield Specialist. He joined after 9/11 and originally planned to reenlist with the Marines, but after two years unaccompanied in Japan, immediately followed by an Iraq deployment and then a cancelled signing bonus, he decided to take care of himself and go to college. We asked Leonard more about his experience making a successful transition to civilian life.

When you were preparing to leave the military, did you already know you wanted to be an accountant?

I was like most Marines — I wanted to kick down doors on a SWAT team or something. But when I started providing counseling services regarding the application process for GI Bills to student veterans at my college, my boss suggested I would be good at accounting. I was already good at math, so I tried a class. It came easily and naturally to me. I realized accountants make a good living and have regular hours, so I got a degree. I figured a degree in accounting is like a degree in business: It could always open doors in the future.”

What military skills or experiences helped prepare you for a career in accounting?

Attention to detail is so important in the Marine Corps. You can’t look at anything as being too tedious. Everything is repetitive, and Marines never give up. Accounting feels like solving a puzzle. If you’re reconciling an account, you have to investigate and treat it like a mystery you get to solve. I like it because now in my current role, I review scopes of work and how it will be solutioned for, who is involved and how it will get done. My military occupation helped prepare me for this role, as it entails a lot of research, studying, and requires a mechanical mindset

Jacob Leonard during his time in the U.S. Marine Corps(Courtesy photo)

It also helped when the VFW talked to us at separation class. They emphasized time management, which didn’t hit me until I went to college. I mapped out a timetable and schedule so I could stay on track with classes and homework, gym time, video game time. I had to follow it to a T, and that helped me on so many levels. I was working full time and going to school full time. At work I gave the student veterans the timetable I created, and it became a standard item in their welcome package. While I guided veterans through the GI Bill application process, I also shared advice and provided mentorship so that they could make the best choices for themselves.

In the military, time moves slowly, but in the civilian world, it moves quickly.

You worked at a few companies before coming to Exelon but have stayed with Exelon the longest. What attracted you to the company?

Exelon has the best benefits I’ve ever had — medical, pension, competitive pay. Originally, I sent out a bunch of emails looking for jobs on Indeed. Two companies interviewed me the same day, and both offered me positions. The Exelon job was in the city , but I live in the suburbs and I didn’t like taking the trains, so I chose the company closer to home. I later reconnected with Exelon and they offered me a better opportunity at a non-downtown location.

Do you consider Exelon to be a veteran-friendly company?

We recruit a lot of veterans, especially Navy, because they work on nuclear subs. There is a veteran resource group here, called EMAC (Exelon Militaries Actively Connected). I am the VP of the Chicago chapter. We hold quarterly meetings and luncheons and events to decide what we want out of it. There are numerous employee resource groups at Exelon to foster diversity and inclusion. In addition to being a veteran, I’m Native American, and on Memorial Day we perform a special song and ceremony. This year, they let me invite relatives and do that here at Exelon. This isn’t your typical large corporation; there is a lot of camaraderie. I like that, because in the military, we are all one team.