From Infantry To The Kitchen: A Grunt Turned Chef Talks Transition

Chef Tom Jones didn’t grow up wanting to study culinary arts. In fact, he hadn’t learned much about cooking at... 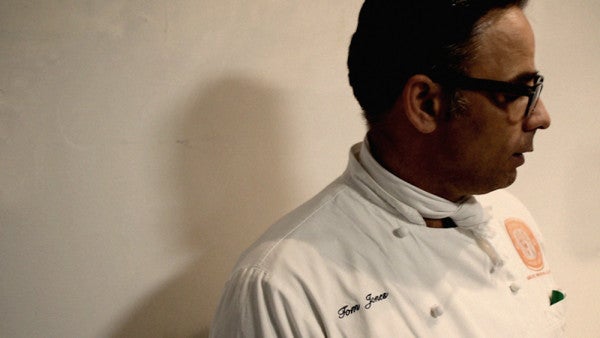 Chef Tom Jones didn’t grow up wanting to study culinary arts. In fact, he hadn’t learned much about cooking at all prior to enrolling at New York’s International Culinary Center in 1998.

Jones was a service member twice over — first joining the Army as an infantryman in 1983 and then re-enlisting in the Marines before retiring to become a world-class pastry chef and culinary instructor.

What fueled his decision to pick up culinary arts is the dynamic environment housed within a kitchen.

“I have found that cooking as a profession is a challenge,” Jones told Task & Purpose. “At every level of our industry the goal is the same, we are trying to provide the best product and experience in the most cost-effective way.”

Though he’s been out of the military since 1998, Jones says the tenets of time management and getting a job done right have stuck with him for life.

As far as training goes, “You learn how to manage time, manage resources, and deliver the product on time,” he said.

He added, “There’s a tradition in classic kitchens, they call it the ‘kitchen brigade.’ It’s not as dramatic as the TV shows, but there is somebody in charge with a vision and a mission. Everybody kind of knows their role and you have to work together as a team,” which is something he also learned from his time served in the military.

Students at the International Culinary Center learn technique through the school’s hands-on teaching approach.Another key to Jones’ success in the kitchen comes from knowing that he’s already seen stress from his time in his service, which prepared him for the pressures of work and life after the military.

“You know there’s a lot of stuff to get stressed out about; you’re in the kitchen; you’re making food to help people,” he said. “There’s the stress of making good food, but you’ve already been stressed out. It’s a helpful thing.”

Leadership too is a critical element in both combat and cooking. According to Jones, it is one reason that the field of culinary arts is a place where veterans can thrive.

“The work that is done in a professional kitchen requires great leadership,” said Jones. “The best organizations in the foodservice industry recognize the importance of the chef who can lead a team in a professional and effective manner.”

According to Jones, a good chef is a leader who can maintain a calm, positive attitude. But more importantly, a good leader is someone who understands how to motivate others and get the most out of a diverse team.

Jones joked that when he feels a lot of pressure at work now, it always reminds him of his time serving.

“I still dream about the Marine Corps whenever I get stressed out at work. I dream I can’t find my and my weapon,” he said, laughing.

He admitted that cooking has its light-hearted moments too. On New Year's Eve 2001 at Restaurant Daniel, the chefs had an intense night, but at the stroke of midnight, everyone stopped cooking and marched into the dining room banging pots and pans to ring in the new year.

After spending nearly 15 years in the military, Jones said he has no regrets about leaving the service.

“My passion and motivation is basically the need to provide for my family,” he said. “At the same time, I am trying to have a positive and engaging work experience.”

Jones added, “There’s that conflict of what your duty asks you to do, and what your family can do. Sometimes you can have success in both and stay in the service, but that wasn’t going to work for me.”

The hardest part for Jones when transitioning was getting his education benefits applied toward the culinary school of his choice.

“When I got out of the service I wanted to learn how to cook, and I looked at a couple schools in Manhattan.”

The problem he faced at the time was that the Department of Veterans Affairs was unsure how to treat programs that weren’t traditional four-year colleges as they related to G.I. Bill benefits. For Jones, it was a struggle to prove his enrollment and the legitimacy of the institution that produced cooking greats like Bobby Flay and David Chang.

“I used my Montgomery G.I. Bill … the biggest headache was actually getting access to those benefits for school.”

At one point, he had to have a professor sign for proof attendance for the VA every week.

Things are different now, he said, with the International Culinary Center offering veterans a number of attractive scholarships and working with the VA to ensure that Post-9/11 G.I. Bill benefits can be applied to the program.

“I went to school here in 1998, just a couple months after I got out of the service. It’s changed a lot,” Jones said.

The International Culinary Center’s New York campus is in downtown Manhattan.Though he has worked with a few veterans, the number of service members enrolled has been fairly low so far.

“I hope more veterans do come here, I think it’s a good program,” Jones said. “I wanted to get the technical skills I wasn’t ready for a four-year college. I wanted to start working quickly so this program appealed to me.”

When he left the Marine Corps, Jones said he had a lot of support and took advantage of every resource available — a piece of advice he suggests that all service members consider when transitioning to civilian life.

“As far as the transition … I had a lot of help. I had the support of my awesome family, who gave me lots of love and support, and kicks in the butt when I needed it.”

Though he’s been out of the military nearly as long as he was in it, Jones said that making the decision about what to do next is the easy part. Waiting for benefits and wading through that process of applying them is what’s hard.

“I got out in ‘98 so that was a different time, and a lot of the veterans that are out there now have a different set of experiences than I did and different concerns,” he said. “But I think once you’ve made a decision about your educational career then it’s just about dealing with the bureaucracy of trying to use your benefits.”

Despite his time in two services, Jones has no regrets about leaving the military behind. It was the right decision for his family. He found equal passion in his second career, working happily as he said, “mostly with chocolate,” and not stressing over things he can’t control.

As a veteran, he said, “Your experiences have prepared you to do a lot of things in this world.”

He added, “I have worked in this field for almost 16 years since leaving the Marine Corps. I might have a third act when this ends, but I haven't decided yet.”