It takes guts to pitch a business idea to an intimidating group of celebrity investors on national television. But it … Continued 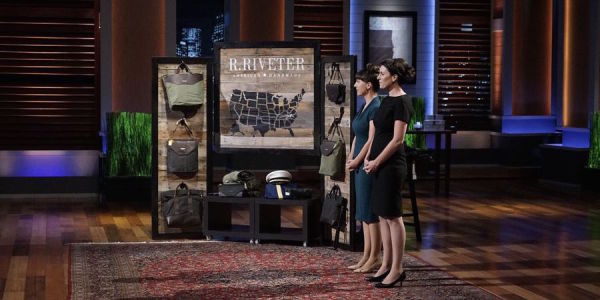 It takes guts to pitch a business idea to an intimidating group of celebrity investors on national television. But it takes grit — and, of course, a distinctively innovative concept — to win them over. Lisa Bradley and Cameron Cruse did just that in February, when they walked away with a $100,000 investment from Mark Cuban on ABC’s “Shark Tank.” Their proposal: to employ hundreds of U.S. military spouses to make gorgeous, artisanal, 100% American handmade bags from recycled military surplus materials.

Unemployment rates among military spouses are three times that of the national average at a cost of around a billion dollars in taxpayer money each year, according to a Blue Star Families study. Bradley and Cruse knew they wanted to help alleviate that problem even before they knew exactly what they wanted to do as a company.

“It was so much more about the mission than growing a business,” Cruse told Task & Purpose. And who better than Rosie the Riveter — the hallmark of American women’s empowerment — as a namesake? Thus, R. Riveter was born.

Bradley and Cruse met when their husbands served as Ranger instructors at the 5th Ranger Training Battalion in Dahlonega, Georgia. Both women hold master’s degrees — Bradley in business and Cruse in architecture — but because they were constantly jumping from duty station to duty station, both struggled to find meaningful employment.

“Local employers know that you’re just going to be moving, so we were either facing a really long commute or a part-time job that wasn’t really suited to us,” Bradley explained. “So we decided to make a change not only for ourselves but for other military spouses, and we decided to do something that we could move with.”

But first Bradley and Cruse had to figure out how to run a business without any help at all. Their husbands were frequently away on long training sessions — “conveniently at times like when we needed help getting a 150-pound sewing machine up an attic ladder,” joked Bradley. Without a loan or any kind of financial assistance, the duo was only able to purchase raw materials for the R. Riveter bags and the equipment to construct them.

“In the beginning it was just Cameron and myself making bags in her attic,” Bradley recalled. “We started in November of 2011, and we contributed a little over $2,000 each into the company. From there we just grew it bag by bag and military spouse by military spouse.”

Over time, Bradley and Cruse designed a flexible yet lucrative business model that provides military spouses an option to keep their employment whenever and wherever they move. But unlike other “work from home” businesses that you can move with (like Mary Kay or Avon), R. Riveter does not require an upfront investment in product from their employees — whom they charmingly refer to as “Riveters” — and they do not require their employees to sell the products.

“We ship the raw materials — canvas, leather, lining fabric — directly to the Riveters’ home,” Bradley explained. From there, the Riveter uses those materials to construct the individual components of the bag in her own home, and then R. Riveter purchases those components for final assembly. All of the materials that go into R. Riveter’s limited edition handbag line come from donated military clothing or are U.S. armed forces surplus materials that come from a military spouse vendor.

The bags are assembled in Southern Pines, North Carolina, just outside of Fort Bragg. “We have a retail shop here, as well,” Cruse said. “The hub that we’ve created at Fort Bragg is one where we provide income and employment to military spouses and civilians to be able to support that manufacturing network.”

In 2014, Bradley and Cruse gained serious traction in their business when they launched a successful Kickstarter campaign, which earned over $40,000. Soon after, they were contacted by the producers of “Shark Tank,” who offered them the opportunityto pitch their business concept on the show.

“Shark Tank was awesome,” said Cruse, “We received three investment offers from the Sharks” — including a $100,000 investment offer plus financing options from Mark Cuban. “That experience has really propelled us probably four years into the future on our growth trajectory.”

The Riveter network has since grown to include 31 remote Riveters who work as independent contractors and 25 staff members.

Although the bags come at a relatively high price point, they are highly sought after. “Our customers understand what it means to make something here in America,” Bradley said. “So many manufacturers are moving their operations overseas. Not only are we 100% American-made, we’re also supporting military spouses by shipping parts and pieces to and from them.”

Through the fame and success that’s come in the wake of “Shark Tank,” Bradley and Cruse hope to inspire other military spouses. “We’ve seen in our short time of being a business the big picture of R. Riveter,” said Cruse. “It’s not necessarily to employ every military spouse or empower them through our mobile income model, but it’s also to show them that they can do this — they can have their own business.”

Each handbag is stamped with the maker’s number. If you go the R. Riveter website, you’ll be able to “meet” every single military spouse who helped create your bag. “It not only symbolizes a community of R. Riveters, but an American military community of spouses,” said Bradley.

The future of R. Riveter is looking just as bright as its beginning. Bradley and Cruse hope to open more R. Riveter shops, and also continue expanding the Riveter network to spouses and bases nationwide. Their ultimate goal: to create local R. Riveter communities on all military bases.

“We want our Riveters to be able to pick up and move from Fort Bragg to Colorado knowing that they have one less thing to worry about — they can plug right into another R.Riveter community at their next base,” said Cruse. “If we can do anything to lessen the burden of our active duty military families, that’s success in my book.”

Task & Purpose readers will receive an exclusive 15% discount by using the code TASKPURPOSE15 upon checkout on the R.Riveter website.

Apply to become a Riveter here.