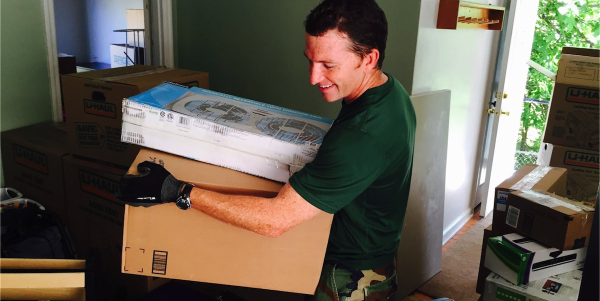 Steve Buchanan witnessed firsthand the difficulty of veteran reintegration after separating from the Army at the height of the unemployment crisis. In response, he developed ChooseVets to address this obstacle and help his fellow veterans find meaningful work and reintegrate into their communities.

Buchanan is a 1999 West Point graduate who served nine years as an infantry officer in the U.S. Army, including tours in Iraq and Afghanistan. After encountering a lack of fulfilling job prospects following his separation from active duty, he decided to go back to school. Buchanan attended the University of Washington where he obtained a JD and an MBA, setting in motion the creation of ChooseVets.

Buchanan spoke with Task & Purpose about how his experiences led him to become an entrepreneur.

Growing up in western New York and Chicago, Buchanan always knew he wanted to join the military. While he initially wanted to be an astronaut and attend the Air Force Academy, a savvy Army recruiter told him that more astronauts came from West Point.

A visit to the U.S. Military Academy solidified Buchanan’s decision. He found that he got along best with the cadets, who, like him, were academically skilled, athletically inclined, and leadership focused.

At West Point, Buchanan majored in math, which today serves as the foundation for his business approach.

“Math forces you to think in totally different ways,” he explains. “You have to come up with a totally new way to solve something rather than applying someone else’s methodology.”

The path to entrepreneurism

Buchanan’s time in the Army provided valuable insight for his business career; specifically, he learned the high level of dedication service members consistently display. “You take a high school kid who is a high performer and they get taught how to do something. They’re trained to show up on time and how to complete a mission, and they do it out of love of country and a willingness to be a high performer. That’s incredibly valuable,” affirms Buchanan.

Buchanan’s entrepreneurial drive came from his discouragement at seeing the high rates of veteran unemployment and underemployment. He decided to work toward a concrete solution. Before ChooseVets, he started a veteran-staffed moving company as well as a cleaning company. He quickly realized from these experiences that people truly value hiring veterans, and would frequently choose veterans over other candidates, all other variables being equal.

“When a client hires a veteran, some kind of magic happens,” says Buchanan. “The veterans themselves get a personal ‘thank you’ for service. It’s more than the thank yous received at an airport, it’s an ‘I hired you because of your service’ thank you.”

Buchanan’s time at the University of Washington, along with his veteran status, were instrumental in helping him shift from a moving and cleaning company to ChooseVets’ full-fledged online marketplace. Mentors in the university’s veteran entrepreneurship program helped him to expand his company vision. After developing a new, broader business plan and securing investors, ChooseVets successfully launched.

As a business owner, Buchanan also developed a formula that he applies to each of his companies for hiring. The process is as basic as finding people to work, figuring out their availability, giving them training, and then finding clients and matching the employees to the availability. What is unique about Buchanan’s approach is that ChooseVets allows veterans to self identify the skills they are offering. It is not based on one skill or service, but rather any skills that veterans already possess, be it from their military training or another source.

“That’s when the ‘A-ha!’ happened that I could do this in every city,” shares Buchanan. “I could do it for every service, in every city at the same time.”

On average, according to the Office of the Chairman of the Joint Chiefs of Staff, over the past few years 200,000 service members have separated from active duty annually. Buchanan launched ChooseVets at the end of 2014 to assist these transitioning service members.

The mission of ChooseVets is to connect veterans with valuable work experience as they reenter the civilian sector. It’s an online marketplace that links veterans who provide services, trades, and labor with clients who need to get things done. Customers can find local veterans, or current service members, and hire them to complete jobs, tasks, or projects.

As of June, there are 200 veterans who have initiated profiles on ChooseVets, 43 of whom are considered “active” based on the verification of their veteran status and completeness of their profiles. Of these, 10 veterans have found work through the site so far, including Buchanan. In addition, there are 159 registered clients, many of whom have already received services through ChooseVets. Many clients are already repeat customers.

ChooseVets is currently based in Washington state and looking to replicate the success nationwide. In February, the marketplace launched in additional cities — Dallas/Fort Worth, Detroit, Oahu, and Washington D.C. — where veterans are already beginning to sign up to find projects.

The services veterans provide are as diverse as lawn care, household moving, home improvement, and child care. As such, ChooseVets offers various ways for veterans, who bring myriad skills to the table, to work in their communities. Jobs can be one-time gigs or recurring sets of tasks.

“We offer a third path for veterans leaving the military, which is the on-demand world somewhere between full-time employment and going to school,” explained Buchanan in a recent interview with Mother Nature Network.

The ChooseVets website perhaps says it best: “Military veterans are trustworthy, mature, disciplined and know how to get a job done right. If you need to hire some seasoned, expert help or just an extra set of hands and a strong back, you can trust a service member or military veteran to accomplish the mission efficiently and courteously.”

For ChooseVets, hiring a veteran for a project is a great way to personally thank them for their service in a meaningful way. But beyond delivering a personal thank you, something else happens when veterans are matched with customers. “The clients ask the veterans about their service because they’re curious,” describes Buchanan. “So the veterans get to tell someone who cares and the clients get a better understanding of what it means to be a veteran and what it means to serve.”

In this way, working with ChooseVets is a helpful part of the veterans’ transition. “Transitioning vets don’t necessarily have community ties where they’ve left the military,” says Buchanan. “[With ChooseVets], they get this feeling of acceptance in the community; it’s a very helpful transition for those veterans who aren’t necessarily feeling like the civilian population understands them.”

Buchanan stresses how important it is that transitioning veterans manage their expectations and not be too hard on themselves as they enter the civilian workforce. His first piece of advice is to not believe all the rumors about life outside of the military. “You always hear the barracks rumors about some guy who got out and is making $100,000 right out the gate, and that’s just not true. Finding a job is incredibly hard work. It’s hard work to translate the skills you have. It’s hard work to find a job that respects the work you’ve done, or even cares about it. Finding a job right out of the military is really tough,” he cautions.

Buchanan also recommends that transitioning veterans take advantage of the G.I. Bill and go to school. “It does a lot for you. It helps you transition into civilian life,” Buchanan offers. “You’d be amazed how much easier school is after serving in the military.”