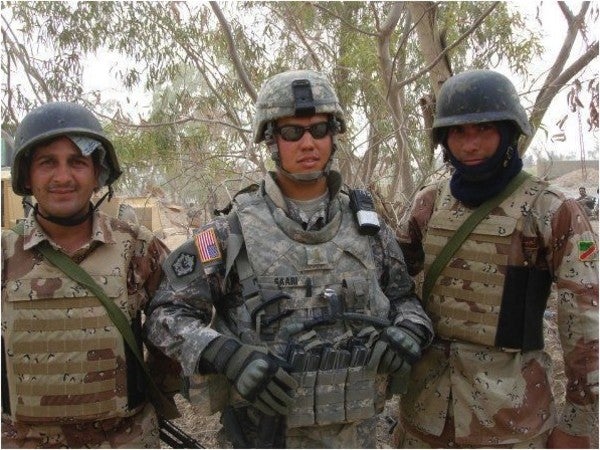 Saari is now founder of tech consultancy Base of Fire.

Title: Founder, Base of Fire

Aaron Saari’s path to entrepreneurship has unorthodox origins. As a young military cadet, he stumbled across “The Game,” a book written by pickup artist Neil Strauss.

“I thought I could use a little help,” laughs Saari. “Ironically enough, although it sounds sleazy, the book was actually a great education about the way we all make decisions. It was the entry point for my research into small businesses, social psychology, and how people form habits.”

Today, the 29-year-old West Point grad and U.S. Army veteran of the wars in both Iraq and Afghanistan applies his broad base of knowledge as the founder of Base of Fire, a business consultancy that helps midsized businesses optimize operations and marketing with the latest technologies.

“Every business is trying to build its unique castle,” Saari said. “From accounting software to sales tools, most of the Legos it will take to build that castle already exist and easily link together.”

Saari said his job is to look at the castles, see what’s missing, and pull the right pieces from the rucksack he’s been filling for the last seven years.

“I empower them to build their castles without trying to design a new Lego,” he said. “It’s all about problem solving and discovering which systems and technologies work best for the client.”

On the value of self-education

“It’s easy to look at my formal training at West Point and my informal education in the Army and say those are the golden tickets,” noted the Lakota, North Dakota, native. “But I think self-education is actually the most important.”

Aside from “The Game,” Saari counts Timothy Ferriss’ “The 4-Hour Workweek” among the most influential books he’s read. Before his first deployment, Saari vividly recalls sitting on a window ledge overlooking Puget Sound and reading the book.

“It was life changing,” he said. “The book opened my eyes to the concept of lifestyle design. Self-education provided higher-level principles that let me use the tactics I learned from West Point and the military to their full advantage.”

After a deep dive into the concept of lifestyle design, Saari knew he wanted to be his own boss — he just didn’t know what he wanted to do.

“As I prepared to leave the military, I decided I was just going to do a bunch of startup programs and learning events and figure it out,” he said. “It’s what most people would call risky. Some people would even call it stupid, but stupid people take risks. I decided to jump all in, and it worked.”

Saari looks back on his time as a young officer with a sense of gratitude.

“You’re 23, you deploy, and you have a maximum amount of trust and responsibility,” he said. “It’s a lot like being an entrepreneur. You get the end state, your startup team, and then you figure out how to succeed together.”

However, it was exactly that taste of independence and trust that propelled Saari out of the military.

Still, Saari credits the military with his strong sense of integrity, his self-discipline, and his capacity to build healthy team cultures.

His top 3 tips for transitioning veterans

1. Don’t look for a handout, and don’t play the veteran card too hard. There are some great programs out there, but view them as tools, not the thing that’s going to get you hired.

2. Find other veterans who are doing the things you want to be doing and network with them. Check out Iraq and Afghanistan Veterans of America, Team Red White & Blue, and Vets in Tech. Go to a mixer, or go on a couple of runs. The veteran community is like the biggest fraternity in the world, and if you don’t take advantage of the frat, then what was the point of going through rush?

3. Put value into the little things you got from the military: habits, fitness, and connectedness. Apply those disciplines to your daily life so you can focus on growth and free up your decision-making capital for the things that will really help you succeed.

Lydia Davey is an entrepreneur and U.S. Marine veteran. She is the founder of Moriah Creatives Public Relations.