Empowered through work: How a military spouse found strength in her job with The Home Depot

Stephanie Rasmussen is a strong woman. She never knew what her capabilities really were until she married into the Army and started working at The Home Depot. 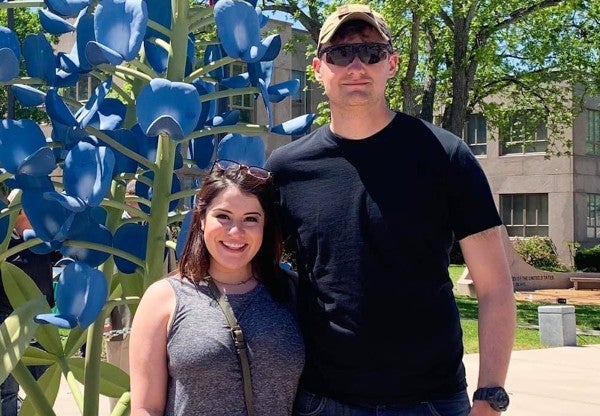 Editor’s Note: The following story highlights a veteran at The Home Depot, a company committed to including talented members of the military community in its workplace. The Home Depot is a client of Hirepurpose, a Task & Purpose sister company. Learn More.

Stephanie Rasmussen is a strong woman. She never knew what her capabilities really were until she married into the Army and started working at The Home Depot. Between the two, she learned new skills and discovered abilities that she never knew existed in herself. She was empowered to dig deep, reach high, and ultimately succeed at both.

Marrying into the military three and a half years ago, Rasmussen wasn’t sure what to expect. Her husband, Greg, was an Infantryman and now recently a Drill Sergeant in the Army. Military life was new and exciting, and she knew she was in for adventure. Right off the bat, the military life threw some curveballs the Rasmussens’ way. Early into their marriage, they were separated by a months-long deployment. Rasmussen and her husband were living separately, finding their own way instead of continuing to settle into married life. Rasmussen knew that it was not her ideal situation; however, she had a different perspective from most. “I found it empowering,” she said. “I realized that I could endure more than I thought I could.” That perspective is one that has served Rasmussen well in her life.

Rasmussen never expected to land at The Home Depot. She was working for another company when a The Home Depot store manager started recruiting her. “I said no for a full year,” Rasmussen laughed. “I’m glad I finally listened to what he had to say.” After hearing what The Home Depot had to offer, Rasmussen was excited to expand her horizons. “The Home Depot offered higher pay and a full-time position,” she explained. “It was impossible to say no.” She immediately began working as a Garden Associate at a store in Frisco, Texas.

Like many military spouses, just as Rasmussen settled in and felt comfortable in her new role, the military required a move. Instead of getting discouraged, Rasmussen saw this as an opportunity. She could relocate to a new location and try a new role. The Army relocated them to Fort Hood, and Rasmussen worked at the Pro Desk and the Garden department. When her husband’s deployment came upon them, Rasmussen and her husband decided it would be best for her to relocate to live with her parents during that time. “It was not an easy decision,” Rasmussen shared. “But it was the best one at that time.” With another move came another position. She started in the Plumbing department in Greenville, Texas.

Rasmussen endured several more moves, each time relocating to a new The Home Depot store in a new location. Each move brought a conversation on what she wanted to do at the new store and an opportunity to try a new position within the company. The Rasmussens recently landed in Fort Jackson, South Carolina, where she found her favorite job yet. “I’m currently working as a Pro Desk Cashier, and I love it,” she said. “I enjoy getting to know the contractors, making connections, and helping them get what they need.” Based on store location Rasmussen also loves that the position has more consistent scheduling, something many military spouses have a hard time finding with their constant relocations.

Rasmussen has gained valuable skills with each new position at The Home Depot. She has tackled jobs that she never imagined she’d learn. “I’ve learned how to fix a faucet, how to lay tile, how to work with power tools,” said Rasmussen. “These are usually male dominated skills.” The Home Depot has empowered Rasmussen with new abilities that have benefitted her at work and at home. “I can do a lot of this stuff better than my husband now,” she laughed.

With each of her moves, Rasmussen has easily transferred to a new store location at The Home Depot. “It has been a seamless process,” she shared. “Each store has welcomed me with open arms, and there has never once been a question of whether or not I will get a job when I move.” That level of support has empowered Rasmussen in her career. “Knowing that I have a job no matter where I move is lifechanging.”

Rasmussen values her career with The Home Depot for many reasons. “The Home Depot will always take care of you as an employee,” Rasmussen shared. “If you are there for them as an employee, they will be there for you in return.” Working for a company that rewards loyalty gives Rasmussen piece of mind. “When I suffered from a medical issue a while back, the company took good care of me,” she said. “Managers checked up on me, coworkers supported me, they gave me time off as needed. In another instance my husband was deployed, and I was living with my parents in Greenville, TX. Our HVAC went out in the middle of Summer, and we could not afford to replace it. My store manager lent us window units for each room and had a couple of co-workers come install them.” This level of support means the world to Rasmussen and proved to her that The Home Depot cares about her as an individual, not just as an employee. That personal connection cannot be understated.

Having a portable career with a nationwide company has been a boon for Rasmussen. However, balancing a career with her military lifestyle has not been an easy journey. “With our constant moves, it has made it much harder to grow within the company,” shared Rasmussen. “There is room for advancement but the opportunity to move up the ladder comes at a slower pace.” Rasmussen stressed that it is a challenge for military spouses to have time to show their worth in a new location when they are constantly on the move. “Every time you move you have new leadership, new colleagues and have to create new relationships and learn different things, often you have to prove yourself again.”

“As long as Greg is in the military, his career will always come first,” explained Rasmussen. “We will never relocate for my job while he is in the Army, unless I choose to live away from him.” Rasmussen was honest about her experience and what military spouses face in their careers. “Spouses make sacrifices that go unnoticed,” she shared.

The Home Depot has already landed on several Military Friendly lists, making a name for itself in the military community. Their Foundation has committed half a billion dollars to veterans causes by 2025, including focuses on veterans and family housing and trades training for separating servicemembers and military spouses. In the coming months, strengthening the benefits offered to veterans and spouse employees will be followed by a focus of hiring more of this population. The company is also working on a transfer program specifically for military spouses. This will only increase the attractiveness of a job with The Home Depot for a military spouse. For employees like Rasmussen, the benefits combined with job security within a portable career leave no doubt that she’s in the right spot.

Military spouses face many obstacles, they try to balance their own careers with that of the military member. For Rasmussen, constant moves and relocation could have become a career ender. But instead she took the path of empowerment and turned her struggles into strengths. Now after several years of working and moving with The Home Depot, she can’t wait to see what comes next.