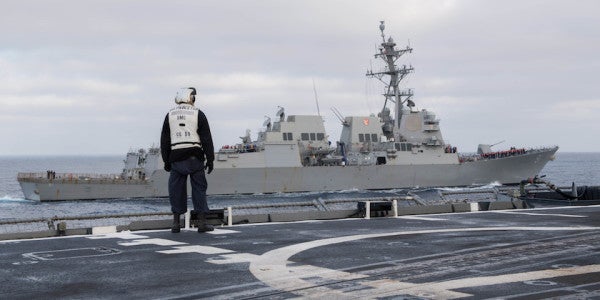 Gunner's Mate 2nd Class Aaron Booker was arrested by Navy investigators in Great Lakes, Ill. on Tuesday on suspicion that he stole 20 concussion grenades from a ship he had been serving on in San Diego, according to Associated Press.

Now, you may be thinking, hmm, well, that doesn't seem that dumb. Brace yourself, reader.

Booker was previously assigned to the USS Pinckney in the Weapons Department, where one of his duties was to check the temperature of the locker where the grenades were kept. As is the case with armories, only a limited number of people have access to certain areas.

In Feb. 2017, the grenades were discovered missing. A week later, Booker left for his next duty station in Great Lakes.

Oh, but it gets so much better.

The grenades were found roughly two months later, but not on Booker. Officials told AP the stolen items were inside of a black military backpack, leaning on a guardrail alongside I-15 in Arizona. A tag inside said, “GM2 BOOKER,” which makes me laugh hysterically, and yet makes me think of so many questions.

To be clear, Booker denies he took the grenades and these are mere allegations, though he told investigators two grenades that went missing may have wound up in Mexico (how would you know that?).

So, question: Did you ever think, hey, maybe someone is going to check on how many there are in this locker and the timing of my leaving the ship could be suspicious? (Probably not).

What the hell are you going to do with concussion grenades? Are these for home defense?

Anyway, Booker faces up to 10 years in jail and a $250,000 fine if convicted, which could hopefully be softened if truTV brings back the show for another season.