The F-35 Lightning II jet can't communicate all that well with its little brother the F-22 Raptor. Because of course... 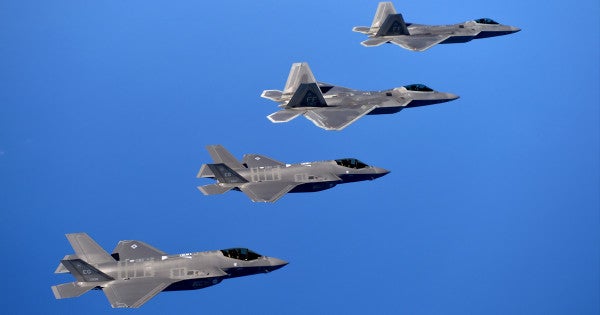 The F-35 Lightning II jet can't communicate all that well with its little brother the F-22 Raptor. Because of course it can't.

Just like a government-built round peg that's supposed to go into a square hole, the F-22's communications systems can't send its “most sensitive data” to other planes besides other F-22s since they are different from everything else, including the F-35, according to Air Force Magazine.

For now, F-22 pilots can only receive data from F-35 pilots and talk to them on the radio, but they can't send data back, severely limiting the Lightning's much-hyped role as being a “quarterback” on the battlefield.

The situation wasn’t brought about by negligence. In developing the F-22—and later, the F-35—designers needed to preserve the jets’ stealth against rapidly evolving adversaries. Standard radio emissions would reveal their locations, which meant devising ways the low-observable fighters could talk to each other without giving away their position. Both jets have what are called “low probability of detection/intercept” communications gear to stay hidden. The F-35’s system—because it was developed 10 years after the F-22’s—takes a different approach.

F-22s were supposed to get the upgraded Multifunction Advanced Data Link that the F-35 has, but surprise, that was canceled five years ago due to cost.

The Air Force plans to start fixing the problem by 2021, according to Bloomberg. It will probably cost a fortune, so if you have the means, it may be good to check out some Lockheed stock.