Exclusive: Here’s What The ‘Mullet Recruit’ Looks Like Now That He’s A US Marine 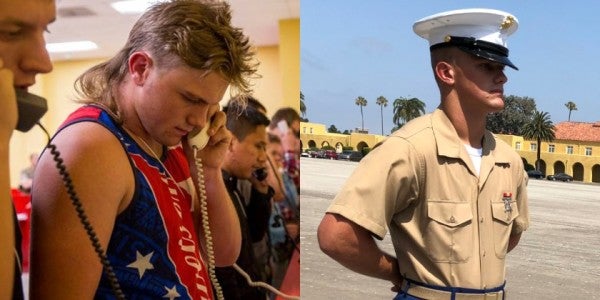 Task & Purpose confirmed that the young Marine, whose name we're withholding at his request, graduated from Lima Company, 3rd Recruit Training Battalion. He now has the privilege of 10 days of post-graduation leave to enjoy.

We can also confirm he’s a decent shot since he qualified as an expert marksman on the rifle range.

“Their training has been focused on instilling our core values: honor, courage, and commitment,” Lieutenant Colonel David A. Becker, commanding officer for the 3rd Recruit Training Battalion, said on Friday. “You have achieved what few dared to try. Earn the title of United States Marine.”

According to his uncle, retired Gunnery Sgt. Mike Voorhees, Pvt. Mullet did not receive any worse treatment from drill instructors at MCRD San Diego despite his mullet.

Pvt. Mullet's family was in attendance on Friday, as was a small entourage of active-duty Marines who drove down from Camp Pendleton to actually see him graduate out of love for his internet stardom.

Ironically, Task & Purpose can report that Pvt. Mullet appeared genuinely really surprised that attendees other than his family were so interested in him, and didn't seem to know how much his mullet picture had gone viral.

Pvt. Mullet with his family

“We drove 45 minutes to see you graduate,” one Camp Pendleton Marine told him after the graduation ceremony.