The Iraq War Was A Mistake. So Why Can’t Gen. Petraeus Finally Admit It?

Just days after the 15th anniversary of the U.S. invasion of Iraq in March, 2003, I wonder why it’s still … Continued 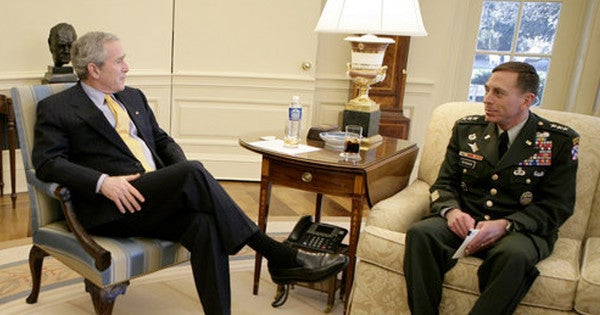 Just days after the 15th anniversary of the U.S. invasion of Iraq in March, 2003, I wonder why it’s still difficult for one of our nation’s most-respected commanders of the war, Gen. David Petraeus, to admit what many already know: Going into Iraq was a mistake.

Petraeus was asked recently by Task & Purpose whether the Iraq War was worth it. Here’s how he responded:

“I think everybody who was in Iraq, who served there, who knows the sacrifice it entails, who knows the cost in blood and in treasure… has been frustrated to see how the country slid back after we left in late 2011,” Petraeus said in an exclusive interview with T&P;’s Jeff Schogol. “But at the end of the day, I think we also have a degree of quiet pride that when our country needed us, we answered the call.”

My colleague Jeff Schogol didn’t ask Petraeus whether the troops who fought there served honorably, or whether they were frustrated by Iraq’s slide into chaos after withdrawal. But the retired general offered a classic example of deflection. It’s a politician’s answer — instead of addressing the actual question, you just answer the question you prefer to be asked.

Petraeus was offered a simple question: Was it all worth it? Given all that we know now, should we have invaded in 2003? And yet, he dodged it. Why?

Admitting it was a mistake isn’t controversial among most in the national security field, or even the public writ large.

Americans were told of a possible “mushroom cloud” brought on by Saddam Hussein’s (non-existent) nukes and other weapons of mass destruction — claims all based on faulty intelligence that former Deputy Defense Secretary Paul Wolfowitz later admitted was just a convenient excuse for war.

The invasion of Iraq destabilized much of the Middle East. It led to the deaths of more than 4,400 American troops and wounded nearly 32,000 others. Anywhere from 100,000 to 500,000 Iraqis were killed. And it cost the United States some $1 trillion — a figure that continues to rise as we remain there to this day.

It’s hard to imagine a retired four-star general, especially one of such brilliant pedigree and strategic leadership ability, isn’t aware of all the falsehoods prior to March 2003 and the mistakes that came afterward.

Even current-Defense Secretary Jim Mattis, a fellow general who cowrote the counterinsurgency manual with Petraeus, was able to admit this hard truth almost two years ago:

“We will probably look back on the invasion of Iraq as a mistake, a strategic mistake,” Mattis, who led 1st Marine Division in the 2003 ground invasion of Iraq, told a conference in 2015. “I think people were pretty much aware that the US military didn’t think it was a very wise idea. But we give a cheery ‘Aye aye, Sir.’ Because when you elect someone commander in chief — we give our advice. We generally give it in private.”

Retired Gen. Michael Flynn called it “a huge error” in 2016. And long before that, there were the six retired generals who stood up in 2006 and criticized then-Defense Secretary Donald Rumsfeld for his gross mismanagement and pre-Iraq War spin, which ultimately led to his ouster.

There’s nothing wrong with admitting the truth, even if it’s a tough pill to swallow. The concept of moral courage demands it.

Coming to terms with what many consider a major foreign policy blunder doesn’t take away from Petraeus’ own success in turning around the war after 2007, nor does it diminish the sacrifices or service of anyone who served there.

“The people entrust … the lives of their children to soldier in our ranks,” Gen. Robert Cone wrote in 2011. “They trust that the Army will not waste those precious resources …. This sacred trust defines the bond between our Nation and its Soldiers.”

And Petraeus, as one of the Iraq War’s most well-known commanders, could easily do his part to restore the public’s trust in the national security leadership that the Iraq War helped degrade.

He just needs to answer the question.