These Veterans Made A Shakespearean Play Starring Tom Hanks A Reality 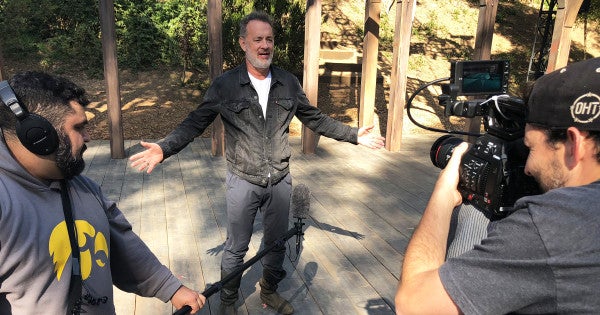 Nicest guy in Hollywood and A-list actor Tom Hanks is currently starring in Henry IV, a play by William Shakespeare, and a substantial number of veterans are the backbone of the production.

“I'm playing Falstaff in the Shakespeare Center of Los Angeles production of Henry IV, on this very stage, that has in fact, been built by veterans,” Hanks says in a new video that goes behind-the-scenes of the play, running from June 5 to July 1st. (You can watch the full video below.)

A number of veterans worked as stagehands, builders, prop managers, and in many other roles behind-the-scenes, giving them a chance to work on a real production and perhaps gain other opportunities in the entertainment industry. Veterans are being offered plenty of free tickets to the show, as well.

While Hanks stars as John Falstaff, other well-known actors play in key roles: Joe Morton as King Henry and Hamish Linklater as Prince Hal. And the production has gotten rave reviews thus far, especially for Hanks, whom Entertainment Weeklycalled a “Falstaff for the ages”:

But Henry IV provides a platform for Hanks that permits him range and evident glee, as he flits through a cavalcade of double-speaking monologues and physical sight gags. Trussed up in a fat suit and a stringy white wig, Hanks loses himself in the role, so much so that he does the seemingly impossible — makes you forget you’re watching a movie star do Shakespeare and allowing you to sink into the action, enjoying the comedic antics that attend his every appearance on stage.

His physical comedy is genius, whether he’s struggling to raise himself from a bench or taking credit for killing an already dead man. With a single raise of his eyebrow or the drooping of his lips in mock disbelief and outrage, he has the audience eating out of the palm of his hand. Hanks has always been a gifted physical comedian, a man able to hilariously channel his sense of wide-eyed mischief through every nerve ending, and it’s a rare treat to see him indulging in that side of himself.

The play is a joint venture between the nonprofit Shakespeare Center, the L.A. County Department of Mental Health, and the West Los Angeles Veterans Affairs campus, which serves as the venue.

Check out the video of the vets working behind the scenes below: