Sgt. 1st Class Kenny Mewhort has been an Army Recruiter on Long Island, New York for a year-and-a-half, and he … Continued 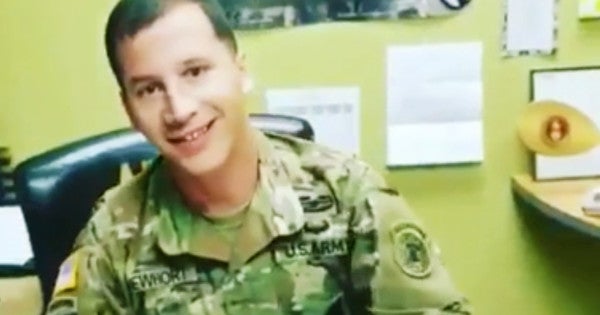 Sgt. 1st Class Kenny Mewhort has been an Army Recruiter on Long Island, New York for a year-and-a-half, and he recently revealed the secret trick to deciding which military branch to join if you really can't decide.

A video from Mewhort showed up on Reddit's military community on Thursday, which had a fellow recruiter asking him, “I've got a guy out here that wants to join another branch. I don't know what to tell him. What do I tell him?”

Let’s Play a game 😂😂😂 from Military

When I called him up, he wasn't aware he had made it to the top of the /r/military community on Reddit, although he wasn't all that surprised. The video was apparently grabbed without his permission from his Instagram, where he often posts serious pics of new Army recruits alongside some good-natured inter-service rivalry.

As you'd expect from a soldier, Mewhort's videos and photos often make fun of the other service branches. But it's not to be taken too seriously; he's had two brothers serve in the Marines and another in the Air Force.

“It's all fun and games,” Mewhort said, adding that he and another recruiter in his office just like to “provide some laughs for the veteran community, people coming in, whoever sees it really.”

He pointed out another video he posted for the 4th of July that went viral, which explains how America freed itself from England:

Then there's this super-short one, which got more than 40,000 views:

He also has an excellent pitch for joining the Army, in the spirit of Dodgeball's White Goodman: