Why Did The Air Force Withhold The Names Of 5 Drone Operators Getting Awards?

Why did the U.S. Air Force withhold the names of five remotely piloted aircraft operators who just received the services'... 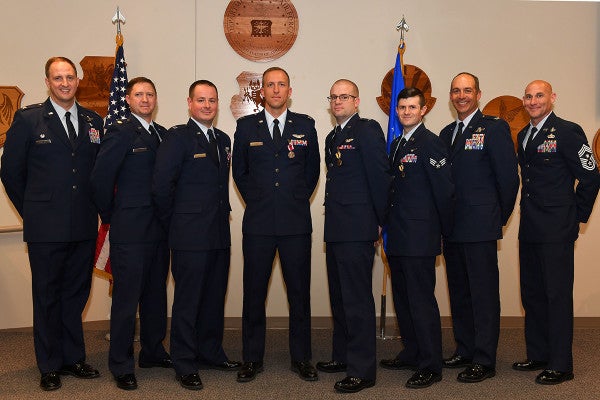 Why did the U.S. Air Force withhold the names of five remotely piloted aircraft operators who just received the services' historic, first-ever medal with an “R” device for remote operations?

That's the first thing I wondered after reading through this story from Air Force Times, which detailed the awarding of Meritorious Service Medals or Air Force Commendation Medals to five airmen at Creech Air Force Base, Nevada. It noted that their “surnames were all withheld from the press release.”

An Air Force spokeswoman told me it's not an official policy to withhold the names of drone operators, but it is a “practice” that is sometimes used in the community. Keeping their names out of the limelight is due to the “tactical details of their job and their security.”

Hmm. Okay. Here's what they did:

Retired Maj. Asa and Capt. Evan received an award for finding, tracking, and eventually taking out a high-value target over a 74-day period in an undisclosed location. 1st Lt. Eric and Senior Airman Jason received an award for taking out an ISIS technical that was firing on friendly troops. And Capt. Abrham kept on station despite bad weather pushing away all other manned aircraft, and eventually eliminated “three enemy targets, two vehicles, and one mortar system.”

So what's the deal here? It seems like any other award citation for your average grunt getting the job done, so why the lack of last names?

I thought back to previous stories of ISIS publishing “kill lists” of U.S. military personnel as the possible reason. But as it turns out, last names were removed from the release either due to the service members or their commander making that call.

Although the Air Force considers unmanned pilots on similar footing as manned pilots, the potential of drone operators to work on “sensitive operations” — like, say, tracking and targeting high-value targets for the CIA, for an example — means there is a chance that some of them don't really want to advertise their exploits.

“Given potential past, present or future close ties to intelligence operations, commanders or Airmen can elect to use rank and first name,” an Air Force spokesperson said. “It is either the service member's call or their commander's on whether their name is to be used.”

The more you know.

So we may not know their full names, but strangely, we do have a service-released picture of them, at the top of this piece. Congratulations to the first recipients of the new “R” device for awards: Asa, Evan, Abrham, Eric, and Jason.