10 Ways Your Civilian Friends Differ From Your Battle Buddies

It's probably fair to say that anyone reading this has a fair share of both civilian and military acquaintances. Friends … Continued 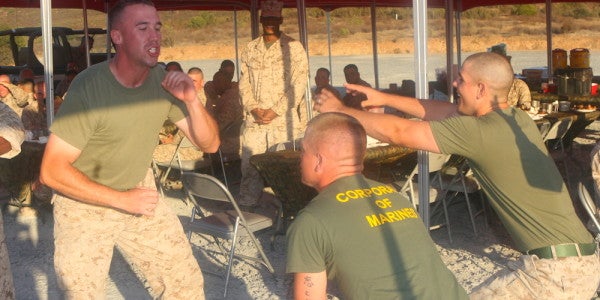 It's probably fair to say that anyone reading this has a fair share of both civilian and military acquaintances. Friends even, if you don't happen to be overly unlikable or unhygienic. And, while veterans and civilians are equally swell types of chums to have, there are more than a few differences between them. The way you interact, relate, and occasionally frolic with your battle buddies will not always be the same as with your friends who never bore the responsibilities and bad haircuts of military service.

While these little distinctions are many, and probably greatly varied depending on your own group of friends/hygiene, here are a few I imagine are universal. You know what I'm talking about. Your battle buddy is probably headed over with those tacos and Bud Lites right now.

1. A civilian friend will be willing, however begrudgingly, to try one of the MREs you “acquired” during your years in service. A battle buddy will be furious that you already ate the chili-mac option when you got drunk one night. That was his favorite and you knew it!

2. When it comes to movies, a civilian friend wants to know your personal feelings on the accuracy and morality of “American Sniper.” A battle buddy just wants to continue agreeing with you about how awesome “Guardians of the Galaxy” is.

3. A civilian friend will find it odd that you'd mount your ceremonial sword in the bathroom. A battle buddy knows you had to pay $600 for that stupid thing and you're going to display it somewhere, damn it.

4. A civilian friend politely ignores any weight you gain after leaving active duty. A battle buddy calls you “fat ass” and tries to talk you into starting CrossFit while sharing a 12 pack of beer and enough Taco Bell to dam a major river.

5. A civilian friend, understandably, requires you to explain when you use an acronym. A battle buddy knows that a POV is really just a car, whereas a CAR is a piece of multi-colored fabric that Marines go batshit crazy over both having and not having.

6. If you need to call and chat at 3 am, a civilian friend will be grumpy about having to get up for work in a few hours. A battle buddy will have a brief panic attack before realizing you're not calling because they're late for PT.

7. A civilian friend will get really personally upset over losing to you in Words With Friends. Battle buddies are exactly the same in this regard.

8. A civilian friend comes to you for advice when he’s tentatively considering getting his first tattoo. A battle buddy swears that, some day, he'll translate what those matching ones, which you got together on your lower backs in Phuket, say.

9. A civilian friend wonders about the stacks of hardcover, lime green notebooks you have amassed from your military days. A battle buddy just nods and smiles. And probably tries to steal a few blank ones.

10. A civilian friend will diligently read the article you wrote for Task & Purpose and pretend to get the jokes. A battle buddy will just read a bunch of stuff on Duffel Blog and tell you that your “thing on whatever” was great.

If I missed any big ones, feel free to comment. I'll be happy to look at what you've added as soon as I win this game of Words With Friends. Because if I don't, I'm eating all the chili-mac MREs I have and my buddy can go to hell.