A Veteran Of The Iraq War Reflects On His Fallen Comrades 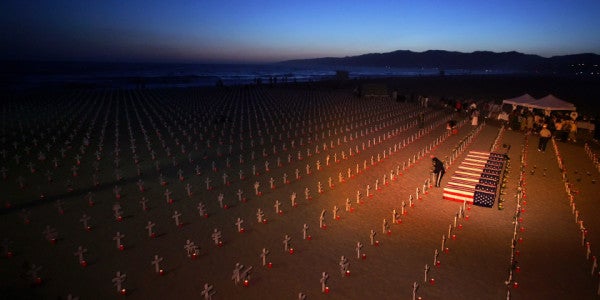 Weapons Company, 2nd Battalion, 25th Marines — a Long Island, New York-based infantry battalion, my old unit, was fortunate to not have lost any Marines during our time in Iraq — March to August 2003 — but many units and Marines were less lucky. Marines were killed in combat. Marines were killed in accidents and by fatigue. We lost many Marines to fratricide. We lost Marines to weapons malfunctions, to gaps in body armor, to snipers, some to suicide bombers, to drowning, electrocution, and we’ve been losing Marines ever since. I’ve known a few of these Marines, most of those only in passing, but their deaths have left an indelible mark, especially now with the war ceaselessly raging in new forms on new and old battlefields. How does it end? How many lives on all sides will have to be consumed? I don’t know, but I’m compelled to think about memorialization. How do we mourn these people, our friends, our dead?

In Iraq, I read newspapers whenever they were available. I read mostly to see the faces and to read the names of our dead. One of my Marines pointed one day to the face of a Marine with whom he had attended Infantry Training Battalion. The Marine, a member of the 4th Marines, had been killed by a sniper in Baghdad. My lance corporal, took it hard. I remember the despair and loss imprinted across his face. By that time, I had learned about the casualties that my old unit, 1st Battalion, 10th Marines, had sustained to that point in Nasiriyah. A lieutenant had been hit by a 60mm mortar round; he later died when the Amtrak in which he was riding was hit by an Air Force A-10. I was told this by an officer I knew in the unit who was himself a forward observer. He was in shock as one might imagine and I was by this time numbed. This officer confided in me that he had seen all he wanted to and was going to leave the Corps as soon as he returned stateside.

Reading the paper during down time, I came across a face I knew. He was a Marine I had gone to boot camp with. We hadn’t seen each other since, but I recognized him all the same. We were both from New York, a point that was emphasized by our drill instructors. He died in Baghdad by hostile fire when on patrol. I look him up sometimes. I look them all up so that I will never forget their faces.

I’ve been receiving loads of emails this week offering discounts on consumer merchandise that I neither want nor need and it’s got me thinking about how we continuously miss the point of Memorial Day. I don’t care about the summer’s hottest trend in shorts and flip flops. I don’t need a new Nook and it is disheartening to know that many people equate Memorial Day with the beginning of the summer season. I am trying to understand the correlation between remembering our dead and the beginning of shorts and flip flop season, but failing because such a correlation is ludicrous. Yet we do it every year.

A good friend who served in the Israeli Defense Forces mentioned how on their day of remembrance, Yom Hazikaron, sirens are heard all over the country and in that moment people stop what they are doing and observe a moment of silence for their dead. Why aren’t we doing something similar?

This Memorial Day, I will be in Maine with other veterans working to make paper out of old combat uniforms. The group is known as Combat Paper NJ and we are being generously welcomed and hosted by Haystack Mountain School of Crafts. The paper that we will make over the next week will be part of a bigger project of memorialization, one piece of paper for everyone killed in Iraq and Afghanistan. This act of making and sharing is a great start to answering the question of how we begin memorializing the wars in Iraq and Afghanistan. As I reimagine the fibers that make up uniforms into paper, I will no doubt be thinking of how best to remember and honor our dead, our friends. At 3 p.m. however, I will stop what I am doing, and I hope with many of you, offer them a moment of remembrance.