Cautionary Lessons On Leading As A Woman In The Military

The opportunity to lead others — whether a small fire team or an aircraft carrier — is one of the... 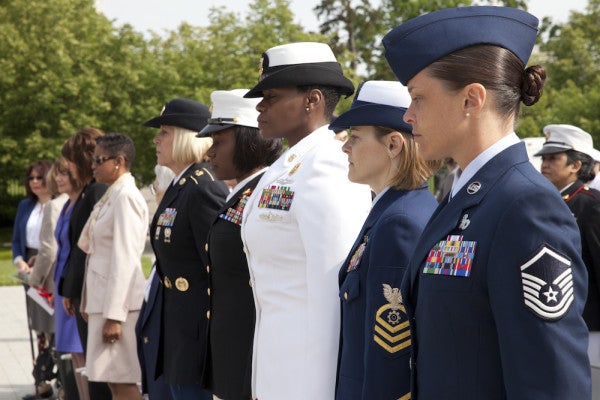 The opportunity to lead others — whether a small fire team or an aircraft carrier — is one of the few guarantees of military service. While gender has no impact on the ability to lead, an occupational hazard of being a woman in the military is that your superiors, peers, and subordinates — both men and women — perceive you differently because of their own ingrained biases. Learning how to navigate these biases and perceptions is an inherent challenge to leading as a woman.

Rather than speak solely from my own experience, I asked nearly three dozen Navy and Marine Corps leaders ranging in rank from corporals to lieutenant commanders in a diverse range of specialties about their experiences.

The responses were overwhelmingly enthusiastic and constructive, and several common themes emerged. One respondent, a surface warfare officer, noted, “The best advice I have ever received concerning being a female in the military was to perform my duties as an officer in the United States Navy, nothing more and nothing less.” Almost all the responses included a version of this advice: Be your (best) self, do your job, and do it well.

Nearly every leader who responded to these questions expressed reluctantly that they are aware that fellow service members treat them differently because they are women, and must take additional measures to ensure their own credibility and success.

Nobody wishes this were the case, and some of us have been guilty of inadvertently perpetuating the problem. Stephanie, a Naval officer, observed, “If you succeed in this male-dominated organization, then you will find yourself, for better or worse, judging every other military female by those same misogynistic standards the men held you to. Your own thinking is twisted because now you see those women who are overweight, don't try, use their femininity as an excuse, or are just plain stupid as now giving all military women a bad name, including you.”

We cannot pretend that this issue doesn’t exist. It’s frustrating, absurd, and sexist. But it’s unquestionably there.

Emily, a naval aviator, recalled, “One flight instructor cautioned me: The bar will never be set at the same height for you as a woman compared to men. Your fellow officers will either set the bar really high, or really low, but it will never be equal to the men's bar. You'll either have to work harder to prove yourself, or they will not expect you to perform as well. I scoffed at him, saying, ‘What age are you living in?’ But he was right, sadly.”

As a whole, the military community needs to increase awareness of discrepancies in perceptions and treatment of men and women service members. The heart of the problem is a widespread failure by male service members to understand differences in their female counterparts' daily and overarching experiences of the military world. Many may merely not know what questions to ask.

There were several themes common to all the responses I received from the women I interviewed. Above all, there was an eagerness and enthusiasm to share their stories, to add to the narrative of the post-9/11 veterans' experience, and include the following:

You will never be ‘one of the guys.’

This validates a status quo that exists in many spheres even outside the military. When I was in middle and high school, women were only starting to play certain sports. I have been told I “can't because I’m a girl” almost my entire life — not because of biology, but because I have always made unconventional choices. Many men simply do not know how to include women as part of their group, as if somehow treating a peer like an individual worthy of respect is an insurmountable challenge.

Although as a woman, you will never be part of the “brotherhood,” that does not mean you are excluded from the group. Most of my friends are men. Like a sister, I’m part of the family.

Last year, I served as the officer-in-charge of about a dozen deployed sailors. Months after returning home, one sailor repeated a story he’d told a new check-in to the command. The new check-in had never worked for a woman before, and asked my sailor what it was like. My sailor explained, as he retold me the story, that he had never specifically thought of me as being a woman officer — meaning that if I were specifically identified as a “female officer” that I was somehow less competent. As far as my sailor was concerned, I was the officer in charge, and he’d be happy to deploy with me again, and that was that.

This experience varies and gender biases may be pronounced in some services or military occupational specialties where women are underrepresented. Samantha, a Marine noncommissioned officer, explained that although she earned the title of “Marine” at Parris Island, her fellow male Marines considered her a “woman Marine,” instead of just “Marine,” almost her entire career.

“To most, above all else, I am a ‘female Marine.’ I really thought after boot camp that I had proven myself,” she said.

It was not until Samantha served as an interpreter with a Marine expeditionary unit that she felt like she was accepted as a valuable part of the team. Despite her competence and indispensability, she still got the jokes “for a chick, you're awesome,” “not bad for a female Marine,” and other comments that highlighted these male Marines’ inability to overcome their own gender biases.

Despite the challenges that arise in the military with leading as a woman, there is confidence that comes in knowing that you have succeeded in a field where the odds are against you. While we all wish the barriers didn't exist, knowing you have reached the same level of achievement, or even surpassed your male peers with twice as much resistance along the way, is not only empowering, but also liberating.

Above all, “What you need to be is professional and good at your job. Period. If you do those two things, people will respect and take you seriously,” stated Lauren, a Marine officer. “Be proud of being a woman and embrace all of the strengths and weaknesses your femininity brings to the table.”

You are under a microscope.

This was the very first lesson I learned at officer candidate school. Women can never “fly under the radar” in the military, even though we also volunteered to be here.

Jen, a Marine officer explained, “You are going to have to work twice as hard just be viewed as being equally as competitive as the guys and even the smallest failure on your part is going to look like something huge.”

The only option is to succeed where others have failed. This “teaches you strength of self and the power you have when you push yourself,” noted Alicia, a Marine noncommissioned officer.

The scrutiny is not only on your professionalism, but also on your personal conduct. People will start rumors about nearly anything, especially in the boredom of deployment. One naval officer recalled that on a previous deployment to Kuwait, she and a male friend played Monopoly a few times a week in a common area on the camp. Soon, there were rumors swirling around the camp that they were sleeping together.

The best advice that most women receive and many ignore (and then find out why it’s good advice) is that it’s a terrible idea to date, sleep with, or be otherwise romantically involved with someone in your unit. For every woman I know who met her partner at work, I know twice as many who endured undue embarrassment that unfairly impacted their colleagues’ opinions of their professional competence. Even the successful couples kept it a secret until well after one or both of them had transferred from the unit.

This is a problem that men never, ever have, even while on liberty in Phuket, Thailand, drunkenly kissing a Thai transgender woman in front of the entire air wing. Is it still a punch line, three years later? Absolutely. But he ended up being a legend in his squadron, and nobody ever questioned his professional competence. If a woman were to do something of the same caliber, her professional reputation would be shattered. It doesn’t mean you can’t have fun on liberty, but it just means you have to temper your shenanigans and act with more discretion.

Be your best self.

As an officer candidate rapidly approaching commissioning day, we watched a video of a speech on leadership given decades earlier to Naval Academy midshipmen. I only remember the following line from it, “Be yourself. Be your best self, but be yourself.”

A commonly repeated stereotype is that women in the military are considered “sluts, dykes, or bitches,” all terms that portray women who choose to join the armed forces as having ulterior motives, or just being outsiders. Bridget, a Marine, remarked, “I am sure someone thinks that I am a bitch, but I never took that advice to heart. I think everyone has their own leadership style and it might be different because I am a girl, but it is probably just different because we are all different people.”

Competence, confidence, and assertiveness might gain a woman leader an undue moniker, but certain individuals’ uneasiness with women in leadership is their problem, not yours.

Being your best self means being a good role model. Someone looks up to you, regardless of your rank, even more so if you are a woman because there are so few. As an ensign, I barely knew my job, but I realized very quickly that the junior enlisted sailors were watching my every move, especially young female sailors.

I had never thought of myself as being much of a role model. I bite my nails, I probably swear too much, I never took calculus, and I’m a slow runner. I make plenty of mistakes, and though I try to learn from them, I constantly feel like I am falling short.

Yet one of the most surprising and rewarding moments in my military career was a few months ago when I assumed my current job. My subordinates — most of whom are older and have more time in service than me — took apparent pride in immediately calling me by my new title. Why? Because unlike my predecessors, I’d been through all the same training and deployed alongside them. I know and understand their experience. In that sense, though an officer, I am one of their own.

So I try to be someone worthy of looking up to, and serve them well.

As Erin, a Marine officer reflected, “Opinions and culture are constant. You work, be professional, stand for what you believe in, you don't have to fight and make radical statements. just be good at what you do. Don't be silent about things that matter. Respect others. Be a leader. Always. You are not alone.”

Women currently serving in the military thrive and succeed in a career field that is resistant and slow to change. Many service members, both men and women, want to pretend a disparity in the treatment of women service members does not exist, either because they do not to “make waves” or because of a stubborn preference for the status quo. The experiences of women in the military matter. We only need to ask the right questions to best understand challenges faced, and how we can adapt and overcome.