The DoD Should Reform Its Food Assistance Program, Not Eliminate It

In 2013, nearly $104 million worth of food stamps were used at military commissaries, and according to a report from... 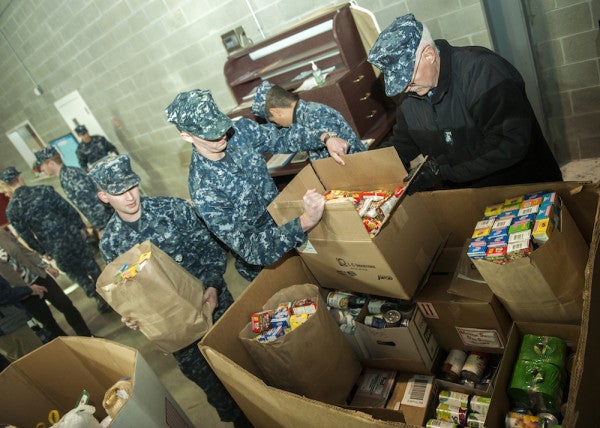 In 2013, nearly $104 million worth of food stamps were used at military commissaries, and according to a report from non-profit Feeding America, 620,000 households that included at least one soldier, reservist or guardsman, sought assistance with their food costs. Meanwhile, that same year, the Department of Defense’s Family Subsistence Supplemental Allowance, or FSSA — the program designed and funded by the DoD to keep military families from having to use food banks — rejected 96.6% of all applications.

This data, and more, was all reviewed in the highly anticipated Military Compensation and Retirement Modernization Commission report released Thursday, Jan. 29. The commission was established in 2012 to conduct a comprehensive review of military pay and benefits, with a focus on sustainability of U.S. forces and preserving quality of life for military members and families. Part of its review included a comparison between FSSA and the Supplemental Nutrition Assistance Program, formerly known as the Food Stamp program, which is a federal aid program, but is managed and distributed at the state level.

Few seem to have heard of FSSA, a complicated program with stricter guidelines than the federal program regarding eligibility, so it is no great surprise that military families are not using it (if they even know about it). It is intended to support military families by raising a service member’s household income to 130% of the federal poverty level. Currently, it functions poorly, so it would seem that the compensation commission’s recommendation to eliminate the program and push military families to use the federal assistance program would make sense. The commission report read:

FSSA is duplicative and, in many cases, less generous than SNAP, which is a much broader Federal program that successfully addresses the same goal of nutritional assistance. In addition, stigmas associated with FSSA may impair the quality of life and careers of Service members and their dependents. For these reasons, FSSA should be sunset in places where SNAP or similar programs are available.

FSSA was originally formulated in response to congressional outrage over military families being on food stamps in the mid 1990s, when an estimated 25,000 military personnel qualified for federal assistance for food and groceries. By the last 1990s, congressmen on both sides of the aisle decried low military pay, with Sen. John McCain arguing,

I find it an outrage that enlisted families line up for free food and furniture while we pour hundreds of millions of dollars into C-130J, automatic grenade launcher, anti-ship decoy, hyperspectral research, and free electron laser programs. The insertion into the budget of hundreds of millions of dollars for an amphibious assault ship that the Navy does not want and that the Secretary of Defense specified diverts dollars from higher priority programs is difficult to reconcile with our professed concern for the welfare of military families.

The Pentagon responded with FSSA, a program designed to be easier for military families to utilize and avoid the social stigmas of the Food Stamp program, with more relaxed guidelines, and allowed families to receive benefits on base, rather than having to go off base to receive assistance. It was passed in the Floyd D. Spence National Defense Authorization Act for Fiscal Year 2001, along with a 3.7% military pay increase.

While the Pentagon’s initial plan was to make FSSA the military version of the Food Stamp program, the DoD has failed to adequately publicize it and ultimately has made it almost impossible to qualify for. Accepted applicants face a lengthy enrollment process that involves having their chain of command sign off on applications — a hurdle not faced in applying for food stamps, and one that might discourage junior personnel from seeking the assistance they need if they thought they might face repercussions at work. It also treats basic housing allowance as income. Furthermore, FSSA has stricter income guidelines of less than 130% of the poverty level, while civilian programs vary state by state and can allow up to 185%.

However, rather than do away with FSSA, there is much greater value in reforming the program. Some potential reforms proposed by the non-profit organization, Mazon, include making enrollment automatic, aligning qualification for assistance with the federal assistance civilian program, excluding housing allowance from qualifying income total, and specifying FSSA purchases for food only, rather than handing out a cash stipend, as is currently done. These changes will greatly reduce stigmas and shame associated with the process of getting approval for the program from superiors, as well as prevent military families from having to reapply for the civilian program whenever a service member changes stations.

Furthermore, allowing DoD to abandon FSSA endorses military leadership’s unwillingness to address the financial problems that some junior military families are having in providing for their families. There is little doubt that the DoD needs to reform spending; however, the joint chiefs of staff and the senior enlisted of each branch seem to have forgotten that those serving who make up the all-volunteer force are their most important asset. The federal food assistance program is designed to fluctuate with the economy. As the economy improves, the program will shrink; however, the financial situation of junior enlisted supporting large families will not necessarily improve at the same rate. Therefore, revitalizing FSSA ensures that the most vulnerable families are looked after by DoD.

Is the image of struggling junior military families really one we want to present to an America that already has little contact with the military? Would someone in uniform having to rely on food stamps to feed their family really provide incentive for people to volunteer to serve in the military?

As Congress begins to consider the proposals put forward by the Military Compensation and Retirement Modernization Commission, perhaps it needs to reconsider the value of having a military program specifically to address military hunger and reforming it, rather than pushing military families onto yet another civilian program to become someone else’s problem.