Why Doesn’t The VA Prescribe Pot To Treat PTSD?

As I pulled into my driveway, a story on “Here & Now,” the public radio midday news program, caught my … Continued 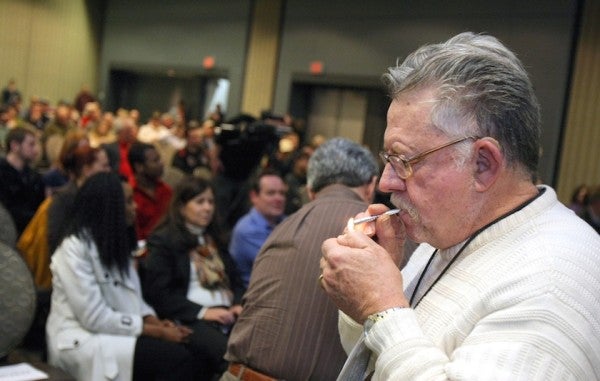 As I pulled into my driveway, a story on “Here & Now,” the public radio midday news program, caught my ear. It involved Dr. Suzanne Sisley and her quest to study whole-plant marijuana’s impact on individuals with post-traumatic stress disorder through a Food and Drug Administration-approved study. Incidentally, Sisley has not had her contract renewed with the University of Arizona where she had planned to perform her study, and, according to Sisley, the failure of the university to provide an office space for the study for more than two years manifested as a direct result of the politics surrounding the study.

“The university struggled with the optics of having veterans smoking or vaporizing marijuana on their campus. They just couldn’t embrace the idea,” Sisley stated in the interview.

However, before we cast ourselves into the pit of irrelevance as to the cause of Sisley’s de facto termination, and the implications of this study’s delay, we must understand the dynamics of post-traumatic stress disorder, its impact on the brain, and what role, if any, cannabis plays.

Post-traumatic stress disorder is a common, chronic anxiety disorder that can occur after traumatic life events, such as combat, disaster, and or physical or sexual assault. Current neurobiological theory suggests that as many as five different brain systems are involved in the disorder. Recent progress in the pathology of post-traumatic stress implicates that chronic stress can result in a decrease in the CB1 receptor function, “compromising an endogenous buffer system to stress in the brain.” Therefore, the CB1 receptor function appears to play an important role in emotional behavior with specific implications in post-traumatic stress disorder.

Mice studied without this receptor exhibited greater signs of anxiety and depression. One article in the peer-reviewed journal Molecular Psychiatry showed real-time analysis of these neurochemicals that have been correlated in some 85% of persons with post-traumatic stress disorder. However, when it comes to the use of marijuana use to treat post-traumatic stress specifically by veterans, there has been little research done on the subject. One study published in March 2014 by the Harbor-UCLA Medical Center New Mexico Medical Cannabis Program reported a 75% reduction in post-traumatic stress disorder symptoms based on 80 psychiatric evaluations. In a recent report by NBC News, veterans told reporter Bill Briggs they were self-medicating with marijuana because it was the first treatment that had alleviated their post-traumatic stress symptoms, even after pharmaceuticals failed to help.

But, before we raise the flag and declare that marijuana is the solution to post-traumatic stress, there are some factors that need to be taken into account.

Most medical doctors, if not all, advocate for the lowest amount of medicine with the highest therapeutic response for the lowest amount of time. Every medicine has its own set of drawbacks. This is no zero-sum game, wherein everybody ends up balanced at the end. To that end, even marijuana has been well established as an addictive substance; researchers find that the withdrawal is similar to nicotine. More to the point, the withdrawal symptoms and intensity of those symptoms match closely to the symptoms of post-traumatic stress, including angry outbursts, trouble sleeping, nightmares or strange dreams, night sweats, anxiety, depression, among others. The peak of these symptoms appear within two weeks of cessation.

While some may argue that marijuana is not addictive, we must remember that addiction and dependence are physiologic first, and behavioral second. Our bodies adjust to the environment by either increasing or decreasing the chemicals and hormones in circulation. This process is called homeostasis. Without it, we could not survive the gentlest breeze. Intake of cannabis causes our body to slow down the production of natural cannabinoids. Once the cannabis intake is stopped, the withdrawal symptoms appear because of the decreased bodily production of these chemicals. Anybody who has had a hangover knows what withdrawal feels like, as well as that if you start drinking again, it makes it better. This is classic addictive behavior. Withdrawal of the stimulus creates a perceived negative response that decreases or disappears with re-introduction of the stimulus. To this end, anything can become addictive.

Now, safety on the other hand is a different matter. Certain drugs, like alcohol and benzodiazepines (Valium, Xanax) can cause death if discontinued abruptly after long periods of use. Cannabis carries no such side effect. However, if the withdrawal increases the symptoms of post-traumatic stress and depression, both of which put a person at higher risk for suicide, then there is a real and not perceived risk of death. Let’s not also forget that even though medicinal marijuana is legal in about half of the states, most companies still have zero-tolerance guidelines when it comes to positive drug screen.

Veterans as a group have a higher propensity towards substance abuse. Many have experience with, or exposure to, drugs and alcohol either before or during military service. In spite of this, some may benefit from the supervised use of cannabis as an adjunct treatment for post-traumatic stress disorder after all other treatment modalities have failed, as anecdotal evidence has demonstrated. However, because marijuana is classified as a Schedule I drug under federal law, the Veterans Health Administration system currently does not permit VA doctors from prescribing medical marijuana in states where it is legal. VA doctors also are banned from completing forms that assist veterans enrolling in medical-marijuana programs.

Any treatment decisions, whether medical, behavioral or alternative, should be carefully researched and openly discussed with your healthcare team. Collaborative and holistic care, which includes each of these disciplines, remains the most effective treatment.