How Leaders Can Sometimes Treat Men And Women Differently

“Sir, should we be walking by ourselves?” The question came from one of my female cadets during the Cadet Leaders … Continued 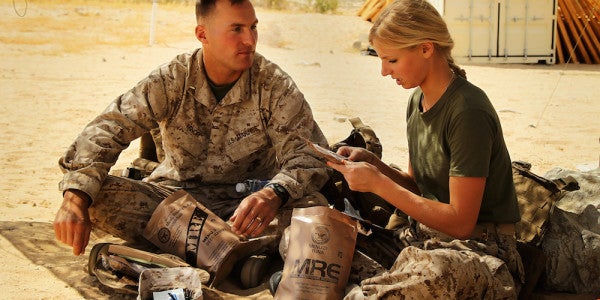 “Sir, should we be walking by ourselves?”

The question came from one of my female cadets during the Cadet Leaders Course at Fort Knox, Kentucky, as we were rucking behind the rest of the platoon of cadets and I was giving her some feedback on the leadership position for the tactical mission that she just completed.

Related: In The Army, Sexual Harassment Training Is Now Literally A Game »

The question hit me hard. At first I was embarrassed: did she think I was being inappropriate? Did I do something to make her uncomfortable? Then a flash of anger: seriously? Am I not to be trusted? A senior captain with 10 years serving my country, happily married, and with the kind of values that makes me cringe at the idea of ever using my rank or position to take advantage of someone?

But then I quickly thought of the people who had taken advantage of others and made inappropriate advances; people who even outranked me, who had even more years invested, who were in positions of even greater trust.

And then I felt fear: the kind of frustrating fear you feel when you know you've done nothing wrong but could see the path where you're still judged to be guilty in the eyes of your superiors, peers, and subordinates. All because of perception. Because of this lazy term that we allow to replace truth when assumptions are easier than dealing with the messiness of investigations and knowing beyond reasonable doubt. It's the catchall phrase in which you can be punished for nearly anything. “Well, you gave the impression that …” or, “The perception in the unit was …”

I quickly pushed aside concern for myself and asked her why she thought that. “Well, I know you’re not like that, but maybe someone who doesn't know you as well might get the wrong idea about seeing a male captain and a female cadet walking alone together. I guess it would be sort of a perception thing.”

“How do you feel about that?” I asked.

“Well, I can see why some people jump to conclusions based on some of the horror stories we hear about people doing the wrong thing. But it sucks that we can't get the same kind of mentorship from you as the male cadets can if we weren’t so overly concerned with other people's perceptions and what they say about us. They already lock all the females into our barracks rooms away from male cadets and cadre, which makes it seem like we're in a special class, unable to speak for ourselves. We’re supposed to be learning how to be warfighters but we get locked up every night like something that’s too fragile to be trusted out in the open?”

This conversation just got real in a hurry. We went from discussing the platoon sergeant's role during a raid to some problems that the Army, and even American society in general, have yet to solve, preferring to insist on full equality, but demanding special considerations when it's convenient.

We discussed whether perceptions lead to justice. Sometimes perceptions were true, and if so, then an investigation could prove it and justice could be served. Other times, the perception wasn't true, but because some people accept the argument that “perception is reality,” you can still punish individuals for doing nothing more than failing to broadcast their clear and honorable intentions to everyone who could possibly misunderstand them, something that male leaders almost never have to do with male soldiers.

We discussed candidly the difficulty she would have if she chose to go combat arms the next year. I have been a huge supporter of getting the best team on the battlefield, regardless of gender, for a while now. But I've been very forthright counseling the female cadets who I feel are the best candidates on the challenges that they're likely to face.

As an infantry company commander, it wasn’t a big deal if I took my executive officer or one of my platoon leaders for a run on our own to talk. No one batted an eye if I took one out to lunch so we could discuss a range or a special training event he had coming up in more detail. But those pesky perceptions start to sneak in when that male company commander wants to take a female platoon leader to lunch to do the same. The challenge is not setting off the “perception” radar while simultaneously providing subordinates with the appropriate amount of individualized consideration, a transformational leadership behavior. If everyone is to get a fair chance to excel as a leader, everyone needs the same opportunities, including individual mentorship.

If we want gender integration within the combat arms branches to realize its full potential, we need to change a few things, individually and collectively. We need to recognize that perception is a valuable step in identifying things both good and bad, but it’s only the first step in a process that must include evidence collection and verification.

We must also resist the temptation to gossip, especially when the person initiating the gossip does not actually know if what they’re saying is truth or just a perception.

Finally, we must have the moral courage to investigate when we perceive actions or behaviors outside of the law or regulation. However, we must be careful not to allow the investigation itself to become an embarrassing and unnecessary punishment. Those of us with the authority to decide guilt and punishment must rely on the truth, based upon factual evidence and not a perception, to make that determination.

Perception is only reality if you are either too lazy or too spineless to fairly and properly investigate. Rather than always assuming the worst in each other, we should assume that the default behavior between two professionals is just that — professional.