“Why We Fight” Is A Question That Has No Ultimate Answer

Editor’s Note: This post appeared in its original form on Carrying the Gun. Clarissa Ward: “When you look back at... 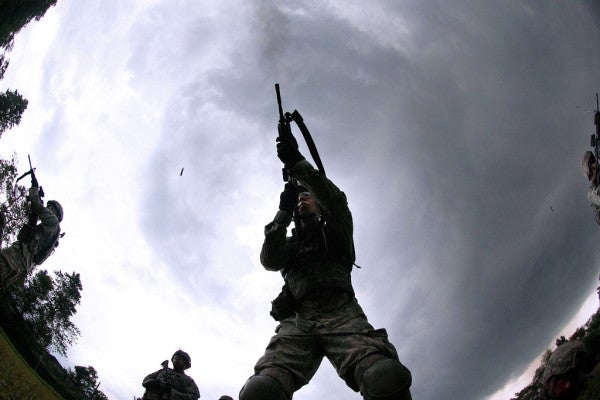 Editor’s Note: This post appeared in its original form on Carrying the Gun.

Clarissa Ward: “When you look back at all the lessons that were learned from Rwanda, from Bosnia in the mid '90s, and yet here we are in 2012 in Syria, and it feels like we're back to square one?”

Kofi Annan: “Yeah, says something about us human beings, doesn't it?” Annan replied. “Do we ever learn? Is it in our DNA to keep fighting each other?”

That is how an interview concluded with former U.N. Secretary General Kofi Annan on “CBS Sunday Morning” back in 2012, when the violence in Syria was spiraling out of control and it looked like we might have been sliding into another Middle East war. The entire interview is worth watching. Annan's thoughts on diplomacy, the failure of mediation, and the international community are bared raw, and they might surprise you.

That interview and the ongoing violence in the Middle East started me thinking about why we fight.

The Army guidance counselor sat in front of his computer, quickly scanning my biographical information and test results. He was hispanic, probably in his late thirties — a master sergeant. He was wiry, with no fat on his body. He seemed strangely out of place and uncomfortable at the Military Entrance Processing Station (MEPS) at Fort Hamilton, New York. I remember staring at a pin he wore on his light green Army dress shirt. It was a long silver rifle on a blue background. I didn't know what it meant at the time, but from posters in the recruiting office, I knew it had something to do with the infantry.

He turned to face me in his chair, hands folded in his lap, and like he has done hundreds of times before, said “So, what do you want to do in the Army?”

I quickly replied, emphasizing my choice with a firm nod, “Infantry.”

He held back a smirk and asked me, with apparent slight disappointment, why I wanted to go infantry. I scored well enough on the entrance exam and could have chosen anything: x-ray technician, engineer, psychological operations, for example.

“I couldn't imagine joining the Army and doing anything else,” I said.

I joined the infantry back in 2001 for a number of reasons, which vary in degree of intensity: Teenage angst, lack of direction, unfulfilled patriotism, romantic notions of military service, fantasy, college money. However, if I had to boil it down to a single thing, I joined for the adventure. A 19-year-old kid looking to go on his own adventure.

Fast forward to today. I've seen the white elephant. Most of it's pretty terrible. After getting out, my time in college afforded me the opportunity to reflect on my military service. What did it all mean? Was it worth it?

I never figured it out. After five years of sitting on the sidelines, the only conclusions I came up with was that I was proud of my military service and I believed in the “system” — for all its flaws — that sends men and women to war. I knew that I missed the Army and I missed being a part of it. That longing was enough to bring me back to the Army. And back to the infantry.

I'm still trying to figure out what it all means. “It” being one's own service and the way it intertwines with and legitimizes violence. I spend a lot of time in my own mind thinking about it. I'm sure others do too. To not think about it is to ignore what makes military service unique: the legal authority for and the application of violence. Individuals carry out that violence, so it only makes sense that individuals grapple with that notion and (hopefully) come to a personal solution as to why they can do it.

“Why we fight” is a question that has no ultimate answer. Social scientists can offer a number of reasons as to why “we” fight on a macro level, but what about the individual who charges the machine gun nest, analyzes the intelligence, fuels the Predator, or pulls the trigger?

That “why” can only be answered by the individual. Everyone is going to have a different reason. God, country, family, money, glory, anger. It's probably not that simple for most, but rather a mix of things that make it somehow acceptable. As for me, some days I think I have it nailed down and I can proudly go about my day. Other days I tumble with different thoughts and ideas and have to patch together a jumble of reasons to reach an acceptable answer.

That's why the interview with Kofi Annan held my attention. I was completely drawn in by Annan's conclusion that maybe we as a species just aren't ready to be peaceful. It's a sad thought, but it's grounded in history, experience, and reality. In his interview, he suggests that there are times when violence might be the only way to reach a solution. It's a conclusion that he has reached from decades of experience trying to untangle some of the world's most troublesome conflicts.

That interview coupled with the flaring violence across the Middle East seems to indicate that there is absolutely a time for violence. It's terrible and not preferred, but it is the status quo. It's the way things are. To completely accept violence as the best way to problem-solve, though, doesn't work for me (that's why we have Marines). And to ignore violence or to self-righteously abstain because it is terrible doesn't work for me either. I know it does for others, and I respect that decision and I'm glad that the abstainers exist — when there are more of them than the rest of us, we'll probably live in a better world.

But for the time being, the world is as it is, not as we imagine it or hope it to be.