The polar vortex pummeling the East the last several weeks got me thinking about the misery of living and sleeping... 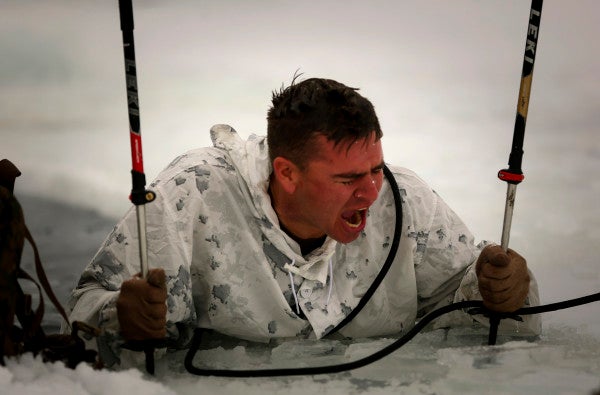 The polar vortex pummeling the East the last several weeks got me thinking about the misery of living and sleeping in frigid temperatures. When I recently heard a friend say, “I’d much rather be cold than hot,” I smiled and replied, “Then you’ve never really been cold.”

Growing up in Rhode Island, I spent many mornings scraping ice from my windshield and shoveling my driveway, yet nothing in those long cold New England winters could prepare me for the harsh extremes of the “Quantico Highlands” — a dark and wooded training area 40 miles south of Washington, D.C., where the Marine Corps, according to my old commanding officer, “chose the best and worst place to trains its officers.” Centered on the eastern seaboard, Quantico hardens young lieutenants with a 34-degree winter that’s too warm for an insulating snow and just cold enough for a shivering rain.

For those who don’t already know, the Marine Corps is a culture — dare I say a cult — that promotes suffering like a competitive sport where the most miserable Marine wins. The longer a Marine is miserable, enduring frozen rain like a Viking wading through icy shoals, the more respect that Marine gains for the ultimate prize: the story. A Marine in the field will endure almost any hardship so long as he (or she) can brag about that experience to other Marines.

So here’s my story.

As a young infantry officer in training, I still remember jumping off a five-ton truck, strapping on my gear, and stepping away from the smell of loud diesel engines and toward the deep forest of barren trees, frozen puddles, and crisping cold. My captain, a hard man born in Iceland, chose me to lead the platoon into those Quantico Highlands for a week of winter infantry training known as “D-Week.”

Once we arrived at the platoon rally point, I gathered my small recon team and told them to find, as Brig. Gen. John Buford said at Gettysburg, some “good ground.” As I continued my instructions, the crack of thunder echoed from a distance, and a minute later, frozen rain began pelting our helmets with a “tacking” noise every grunt knows too well. Huddled over a wet, laminated map, my team and I tried to ignore the darkening mood as if not mentioning the rain would somehow stop it. I dropped to a knee and lined my compass to the map, and my giant captain leaned his thick knee into my back and said, “You hear that thunder Lieutenant Hinman? That’s the sound of your platoon’s will starting to crack.”

An hour later, after we found good ground, the platoon etched forward and settled into a battle position along a small ridgeline. Soon we began filling sandbags and digging our fighting holes — our home away from home for the next five days. As the cold rain poured into our muddy fighting holes and the wind chill cracked through our ponchos, I secretly wished we had brought our tents. Yet tents, as everyone knows, are for the weak. Besides, as we were often told, “Tents are not tactical and they will expose your position to the enemy.”

Once we finished digging (though you’re never really done), the afternoon drifted to evening and we hunkered in for a long night of staying alert (i.e., frozen boredom). When the night turned black, I sent out our first security patrol. As temperatures fell even more, a cold pain crept into my fingers and toes. The warm blood circulating my body had slogged to a freeze and my long slow countdown until daybreak began.

Because in 1st Platoon we fancied ourselves as light infantry — Sioux warriors if anyone cares — we chose to pack light, only equipping every other man with a sleeping bag. After all, we had all seen the movie “Platoon” when Sgt. Elias yanked gear off the new guys with a “you don’t need this, shit-can that” speech. Thus, because we were dumb enough to listen to a Hollywood movie, half the platoon froze.

Without a sleeping bag and my fingers balled up inside my gloves, my neglected toes began to freeze and soon I lost feeling in both feet as if my ankles were attached to cinderblocks. Misery found its home. Soon I began kicking my boots together in a failed attempt to shake the frozen blood and invite feeling back into my ice-blocked feet.

When the night’s first patrol returned, I gathered the small team and with a shivering body and shaking voice, I asked how it went. My team leader, a no-nonsense prior enlisted Marine, stared up at me and said, “You mean the most miserable experience of my life?” I replied, “Yeah, glad you enjoyed it,” hoping to get a laugh. No one laughed.

Lesson #2: Spare no expense on the best cold weather gear and buy those damn disposable hand and foot warmers.

By 5:30 am, every Marine was awake for “stand to,” the transition time between day and night when the enemy often attacks. As the second training day began, I continued kicking my cinder-blocked feet together; still, no feeling. Then one of my squad leaders approached. He was a 19-year-old, chain-smoking Estonian exchange student who would soon return to his former Soviet bloc country as an officer ready to lead less-than-motivated, 17-year-old conscripts. As he approached, I gazed down at his leather boots and exclaimed, “You’re not wearing insulated boots!”

“This is nothing,” he replied with a straight face, “Back home, it’s much colder.”

I then asked how he kept his feet warm in the field. Without answering, he began digging his boot heels onto the tops of my boots and into my toes over and over again, until eventually, he cracked into that frozen blood and brought some circulation to my feet. Though it hurt like hell, it worked, and a slow tingle returned to my glacial toes.

Lesson #3: Ask tough people who have lived in the elements how they stay warm because they too have learned the hard way.

As the subsequent days and nights dragged on, the miserable weather continued and thankfully, Friday finally came and I heard music to my ears — my captain roaring, “End ex.” After freezing in the woods for five days and four nights, a return to central heating, comfy furniture, and dry blankets is a gift from the gods. Besides, grunts love returning to camp and walking tall through the barracks with torn fatigues and muddy boots, knowing they endured the shivering nights with grit and that tonight they would eat and drink like Vikings in Valhalla, while of course, telling their stories.

Though I don’t consider suffering a virtue, pain does teach lessons. Yet, beyond my lessons learned, shaking all night in a frigid fighting hole (which I also did in Afghanistan) gives me empathy and respect for the foot soldiers of every country and a deep gratitude for my own circumstances as a civilian.

Tonight I’ll have a hot shower, a hearty meal, and a warm bed while many Marines and soldiers will not.