Modern veterans have an incredible tool to help them succeed, the Post-9/11 G.I. Bill, which offers up to 36 months... 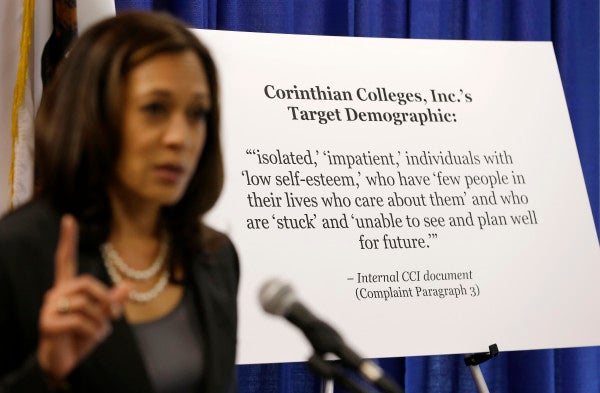 Modern veterans have an incredible tool to help them succeed, the Post-9/11 G.I. Bill, which offers up to 36 months of education benefits. Many vets who attend college nearly free of charge envision that, upon graduation, they will be able to able secure well-paying jobs in the field of their studies. However, for many, this is not the case. Veterans are being aggressively recruited by “enrollment counselors” employed by for-profit universities who want a slice of the G.I. Bill pie, but are not all upfront that they fail to meet accreditation requirements, or offer degree programs not recognized by employers.

Indeed, these enrollment counselors employ calculated recruitment strategies that involve high-pressure recruiting, exploit the fear of failure, and offer the promise of hope.

Former enrollment counselor Laura Brozek spoke in 2012 about the recruiting tactics she used while employed by ITT Technical Institute for over seven years. At a conference held by Iowa Sen. Tom Harkin, who has launched an aggressive campaign against for-profits in recent years, Brozek outlined the “predatory” practices used by the for-profit institution to recruit new students. She discussed one of these tactics saying, “Techniques, such as the pain funnel, were commonly used by the recruitist who demoralized the potential applicants by discussing their life’s shortcomings in order to have them enroll, where their life would improve.”

This pain funnel is further detailed in a 2012 report compiled by the U.S. Senate Health, Education, Labor and Pensions Committee chaired by Harkin. Sections of the nearly 180-page document outline the deceptive practices used by for-profits to recruit potential students, whom they term, “starts,” and how enrollment numbers are often based almost entirely on financial prospects for the institution.

Enrollment counselors are instructed to make cold calls and give as little information as possible to potential students in order to convince them to schedule an appointment. During an appointment, counselors exploit the student’s psychological pain factor to secure an on-the-spot enrollment.

If recruiters do not make their sales quotas, some for-profits punish or even terminate them. As of the 2012 report, there was no law preventing organizations from firing recruiters who do not meet their enrollment quotas.

According to the same report, when questions arise about the length and cost of each program, the recruiters use deceptive practices to minimize the emotional impact of exorbitant costs and hide student loan default and dropout rates. They denote the cost per term while leaving out the total cost of the program and tell students they can obtain a bachelor’s degree in less than four years without highlighting the fact that this requires full-time enrollment without any breaks. When students pose objections about pricing or are fearful about starting the program, the recruiter will then haggle their way into a deal using high-pressure sales tactics. According to a 2007 enrollment counselor guide cited in the Senate report, when these pricing objections occur, recruiters at the University of Phoenix are instructed to say, “When your degree hangs on the wall in a few years . . . will you tell your friends and family you bought the cheapest degree you could find?”

There is another dimension to this recruiting scheme: the word “Free.” As any college student will tell you, books are a pain in the ass. At the beginning of each semester, students scramble to the bookstore with their piggy bank hoping they’ve saved enough change to pick up the latest used edition of whatever book it is they need. This is not the case with the University of Phoenix, however. In a recent interview with Task & Purpose, Brian Evans, an Army veteran and student at the University of Phoenix, explained that Phoenix uses free e-books, which are “icing on the cake” when considering education options after coming out of the military.

However, when asked if he felt that the University of Phoenix was educating him well, he responded, “No, honestly, it’s a joke.” Still, Evans thinks he will have the education necessary to gain an entry-level job in the IT field upon graduation. This, however, may not be the case.

An article published by the veterans advocacy organization Iraq and Afghanistan Veterans of America tells a far different story, one of disparity and student loan debt, profiling veterans who have been awarded funds by the Veterans’ Student Loan Relief Fund to assist them in paying back the debts they incurred while attending for-profit schools after being misled about their job prospects upon graduation.

“Many for-profit colleges promise ‘guaranteed’ jobs to lure veterans into enrolling signing long-term contracts that ultimately exhaust their GI Bill benefits and leave them heavily in debt with substandard educations, non-transferable credits, worthless degrees or no degrees at all,” according to the article. Since the Veterans Student Loan Relief Fund’s inception in 2012, it has assisted a total of 31 veterans in repaying their student loan debt, including Marine veteran Justin Rojas of Burgaw, North Carolina. Rojas graduated at the top of his class with a bachelor’s degree in game design at Full Sail University, a Florida-based for-profit college, and yet was in debt and unemployed as of last month.

Not only do some for-profit institutions lie to veterans by overstating job placement numbers, they also using a variety of deceptive and sometimes fraudulent techniques. A December 2013 Huffington Post article revealed how a number of campus schools owned by for-profit company Corinthian Colleges, Inc., which is now facing bankruptcy, were actually paying contractors and temp services to employ their graduates for at least 30 days after graduation. Corinthian tried to downplay this $2,000-per-student bonus as a way to lessen the cost of instating each student’s employment. However, many former employees have attested to the fact that Corinthian and its subsidiaries would regularly seek out employers with a high turnover rate to open new slots for new graduates to keep job placement numbers superficially inflated.

While this incentive ended in December of 2011, the industry continues to find new ways to inflate its job placement numbers.

For instance, DeVry University claims, “In 2012, 90% of DeVry University associate and bachelor’s degree grads actively seeking employment had careers in their field within six months of graduation.”

Yet, a look at the fine print tells a different story. Almost every one of the company’s campaign statistics is a concoction of student self-reported numbers, DeVry-funded studies, and an active job market that includes those “who were employed prior to graduation or actively seeking employment in their field after graduation.” Further the data “oes not include master’s degree graduates or graduates who were not actively seeking employment, as determined by DeVry, or who did not report data on employment status to DeVry.”

The key point in this sentence is, “as determined by DeVry.” When an organization is allowed to determine a statistic without regulating that statistic, there is room for manipulation.

The bottom line is this. Not all for-profit schools are corrupt, nor are all of them a bad place for veterans to invest their hard-earned education benefits into. They do offer non-traditional opportunities for veterans to pursue their education in ways that are practical for their lifestyles. However, most of these institutions are well versed in the tactics and techniques of manipulative recruitment in order to turn a profit. Therefore, it is imperative that we watch each other’s six.

If you’re looking to continue your education, make sure to ask the right questions to avoid being misled, manipulated, or mistreated by organizations whose top priority is your money, not your education.