The Incredible Logistics Enabling The End Of The War In Afghanistan

It was another early morning at an undisclosed location within the U.S. Central Command’s area of responsibility in December 2013.... 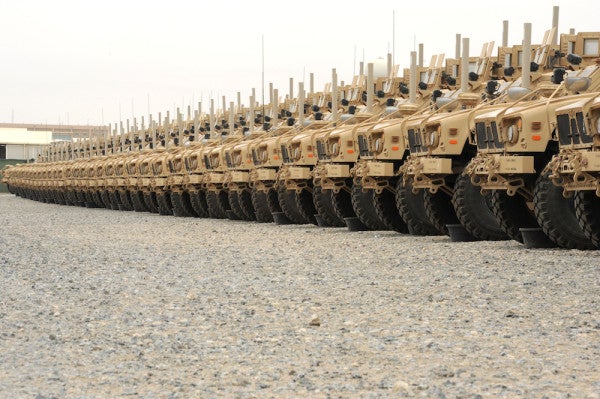 It was another early morning at an undisclosed location within the U.S. Central Command’s area of responsibility in December 2013. Over here, logistics guys like me kept weird hours, and today I was up before the sun. It always was tough to get out of bed at 3 am, but I forced myself. It felt like I’d done a thousand of these mornings for one reason or another, after spending nearly 20 years in Air Force logistics.

As a liaison officer for CENTCOM’s Deployment and Distribution Operations Center based out of Kuwait, my job was to be the eyes and ears of the center’s director as we brought massive quantities of vehicles into our location on C-17s. Once on the ground, they’d be quick-turned at the aerial port and then trucked out of our arrival/departure airfield control group to the seaport where they’d pick up a cargo vessel to the United States.

I groggily swung by the security forces armory to pick up my Beretta, then made my way to hop on a C-17 to Kandahar. I was headed there to hook up with the leadership of the Army’s recently-arrived customs detachment. I thought I knew logistics pretty well, but when I got there, I was amazed at what I didn’t know. In the 1990s, I’d spent more time than most of my peers in places all around the Persian Gulf loading ships and moving cargo on trucks. I naively thought that made me an expert, but that was pre-9/11. How exceptionally oblivious I was.

The military’s combined multi-modal transportation operation in Southwest and South-Central Asia was utterly massive. So big, in fact, that it was hard to fathom all of its moving parts. Contemplating my small part in the process often felt like contemplating the vastness of the universe — I just couldn’t wrap my head around the whole thing. If the process didn’t work though, it got a lot of attention from people at U.S. Forces-Afghanistan in Kabul, as well as CENTCOM and TRANSCOM. That was something me and the people in my chain of command didn’t want.

My mission was purely “facilitator” — manage relationships and make things work. I was the lubricant, so to speak, and I found it was a very necessary position to ensuring the process worked smoothly. It was a gigantic operation, and if you didn’t know at least a little joint language, there would be a steep learning curve. Units from all over Afghanistan funneled vehicles and equipment through redistribution property assistance team yards at the main operating bases of Kandahar and Bagram airfields. Here, they’d be processed by the Army, cleared by U.S. Customs, then they were flown to several ports around the Gulf area to be shipped home. Customs teams were not Homeland Security folks, but military troops re-tasked and trained to do the job of Customs and Border Protection personnel. This responsibility rotated between the services, but the current deployment was Army reserve and National Guard military policemen. Their main job was to ensure units turned in clean assets, and guarantee that contraband, like live ammo, was removed.

Movement and accountability was coordinated by Air Force cargo handlers at each main base’s aerial port. These were full-up squadrons whose sole responsibility was to make sure all the paperwork was right before loading aircraft departing the country. In conjunction with aircrews, they would also make sure the cargo was clean enough to depart the combat zone.

Frequent trips into Afghanistan to talk to customs personnel, aerial ports, assistance teams, and leadership really made my team’s job easy. Not everyone in the movement network understood the impact of their actions (or inactions) if something wasn’t right the first time. Even a handful of dirty vehicles could have a ripple effect down the line. Believe it or not, the single issue that ended up being the most painful was customs. If you’ve ever been assigned overseas and had to send your privately owned vehicle back to the U.S., you understand the white-glove U.S. Customs standard of cleanliness. Now apply that to thousands of vehicles that have been in a dirty, dusty, and remote environment for over a decade, most of which had never seen a hose. Consider the length of time it takes to wash something with ten years of baked-on, caked-on mud three feet into a confined space that your standard pressure washer can’t reach. It literally took 20 hours to clean some of these machines to meet requirements.

Early in my deployment, the small aerial port at our small Persian Gulf encampment received 30 dirty vehicles; the customs process down-range had failed. Worse, we couldn’t wash them. The country we were located in had made a deal with the U.S. Embassy that no cargo originating in Afghanistan would be washed at our site. After much thought and discussion, it was decided the most economical thing to do was send them back to Afghanistan for re-cleaning and reprocessing. That got a lot of attention. Nobody wanted anything that had already departed to come back for something as simple as a car wash. As a result, I spent a week bouncing around Afghanistan connecting with people involved in the process to ensure they understood dirty vehicles translated into no movement. That meant no convoy to our port, and cargo ships couldn’t load what they were supposed to, which meant the spaces reserved aboard a ship for the U.S. government went unused. There would have to be complicated re-booking, and nobody liked that.

Our small band that flew around Afghanistan to expedite movements worked closely with our leadership, who decided it would be best to go back into country at least once a month just to talk to people. It’s amazing what a personal relationship (and the mental image of the face you’re talking to on the other end of the phone) will do to fix an issue. It worked. Dirty vehicles received at our site were cut to less than half the next month and in less than 90 days, the problem was solved altogether. We knew, though, that we had to remain proactive and to avoid future trouble, a significant amount of care and feeding could be required, especially with frequent personnel rotations.

My trip to Kandahar was to bring around our new customs guy from our base so he could meet his counterparts in Afghanistan, and understand this massive process that we played a critical role in. After a long flight and grueling first day on the ground, he turned his tired and baggy-eyed gaze at me across the chow hall table at dinner.

“I never knew how big this effort really was.”