I remember waking up one morning, sleeping on some rocks, spooning my M240B like it was the love of my... 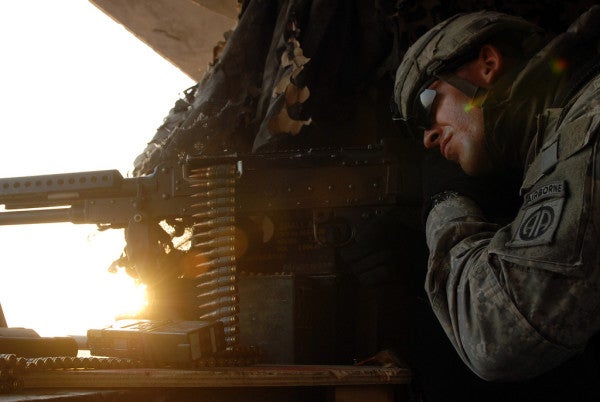 I remember waking up one morning, sleeping on some rocks, spooning my M240B like it was the love of my life.

Inanimate hunk of metal? Devastating weapon of war? The very definition of a love-hate relationship? It didn’t matter. When you’re stuck on a God-forsaken windswept mountainside in Afghanistan, even a machine gun can be an object of affection.

This is swiftly followed by an implacable feeling of hatred after you’re forced to cross several kilometers of steep ridgeline with a 30-pound hunk of steel on a sling rattling against your gut.

It was known as simply the “240,” though the occasional attempt at Vietnam-era hamming would result in it being dubbed the “Pig.” It is a belt-fed 7.62mm machine gun with a quick-change barrel introduced in the 1970s as a replacement for the M60, a ubiquitous gun of Vietnam and Rambo fame.

The M60, for all its cachet, is an inferior weapon to its descendent. The M60 is a Yugo, compared to the Honda Civic that is the M240B. Both will get you where you need to go in terms of firepower, but the 240 is much more likely to make it there without a breakdown.

Over the course of five years, I put tens of thousands of rounds through the 240, under all kinds of conditions. I fired it squeaky clean at the Fort Drum range and caked with moon dust in Afghanistan. Sometimes I found myself taking it for granted, because I assumed it would always work. It was that solid.Through all that firing, and I only remember four jams. Every time, it was because I had neglected it. Even a Honda Civic will break down when you don’t change the oil.

When it comes to machine guns, your average person doesn’t think much about accuracy. You spray in the general direction of a target and presumably you hit something, an attitude that will quickly leave you out of ammunition and probably not a single dead enemy for your troubles.

But the 240 has accuracy in spades. I don’t pretend to be the greatest shot who ever lived, but when you can hit a man at 1,000 meters with the first six-to-nine round burst, it is a sign of quality. Its 7.62mm round makes the 5.56mm that the M4s and squad assault weapons fire look like BBs. A squad assault weapon will just chip holes in cinderblock. A 240 will shatter them with ease.

Such is the love song of a gunner to the best squad-level machine gun the U.S. military ever fielded. But like every romance that loses the first blush, the cracks start to form.

The damn thing was blasted heavy. With accessories like optics and a starter belt, it was over 30 pounds. Combined with body armor, MREs, water, and all the assorted crap that goes with the modern infantry, I would routinely be carrying over 100 pounds.

But the real question, as always, was ammo. Each 100-round belt of 7.62mm rounds weighed seven pounds, and in a combat environment, you wanted every belt you can carry. Machine guns exist for rapid fire, and you can chew through a thousand rounds in no time at all.

If I was lucky, I would have a two-man team to share the load, but I’d still be stuck with another 300-to-400 rounds to add to a back that was already buckling under the strain. I didn’t leave the forwarding operating base with less than 1,200 rounds for the gun team, and my team members each had to carry this along with all the ammo for their M4s. Nobody had it easy, but least of all me.

This was in a country whose defining characteristic is its extreme terrain. I was perpetually either in a valley or atop a ridgeline, with damn little in between. Wrestling an abominably heavy gun through rocky creek beds and up interminable hills has written a legacy that can be traced in the surgical scars on my back and the arthritis in my knees. For every advantage that machine gun gave me and my platoon, it took a harsh payment in return.

By far, one of the most frustrating aspects was the inability to have a large amount of ready rounds loaded. I kept a small “nutsack” ammo pouch with 25 rounds as a starter belt. In combat, my team would hit the ground, my assistant gunner would hook a belt to the starter, and the rock-and-roll began. But this took seconds that could really count if you needed heavy fire right then and there.

There were endless schools of thought on the matter, from keeping 800 rounds in one backpack to be fed out when needed, to strange Predator-style ammo packs like the Iowa National Guard came up with. All I wanted was a decent 100-round-attached ammo box, but there were none to be had. But whatever its shortcomings, our system worked.

That is the heart of the matter. I never once heard a single soul who had the slightest idea what he was talking about badmouth the 240. Everyone who ever used it respected it, and in scary places there was no weapon I would rather carry.

Except the M240L, which is partially titanium and nearly 10 pounds lighter. Gunners today, along with their backs and knees, have all the luck.