On May 27, the Corps’ 24-man rifle platoon performed at Marine Day in Brooklyn’s Prospect Park as part of Fleet … Continued 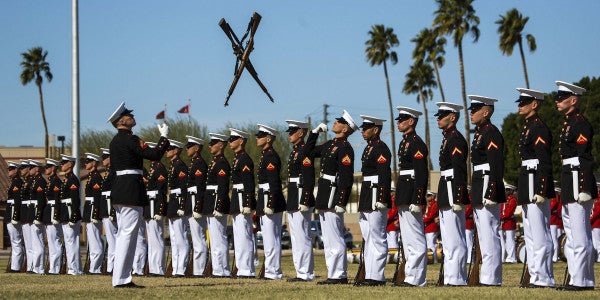 On May 27, the Corps’ 24-man rifle platoon performed at Marine Day in Brooklyn’s Prospect Park as part of Fleet Week New York City. In front of a crowd of spectators, young and old, the Marines perfectly executed the drill movements that exemplify the professionalism of the Corps.

This elite platoon has been demonstrating drill movements since 1948. Here’s what the Corps has to say about them:

These Marines are individually selected from the Schools of Infantry located in Camp Pendleton, Calif., and Camp Lejeune, N.C., based on interviews conducted by barracks personnel. Once selected, Marines are assigned to Marine Barracks Washington to serve a 2-year ceremonial tour. Beyond their ceremonial duties, the Marines collaterally train in the field as infantrymen. To remain proficient, these Marines hone their infantry skills at Marine Corps Base Quantico, Va., throughout the year.

Task & Purpose was at Marine Day this year and captured the incredible performance from the front row. Check it out.