As A Marine I Never Served In A Warzone, But I Still Got To Stick It To Al Qaeda

Sept. 11 is a different kind of day for me. Like everyone else, I know exactly where I was “when... 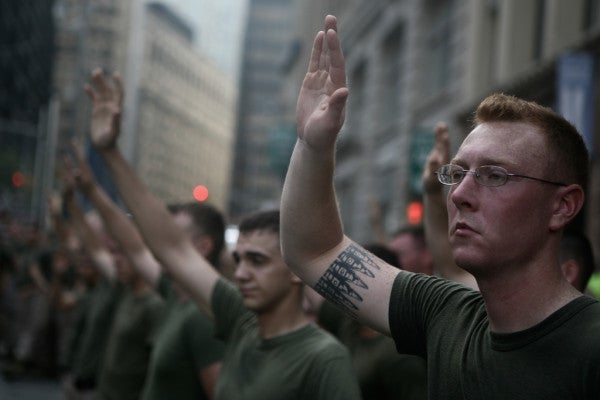 Sept. 11 is a different kind of day for me. Like everyone else, I know exactly where I was “when the world stopped turning that September day,” as Alan Jackson put it.

I was 18 years old and nursing a horrible Milwaukee’s Best (worst) hangover with my best friend in Temple, Texas. We were at his dad’s apartment, Harry, and just waking up. Harry (God rest his soul) called and told us to turn on the news.

And like the rest of the country, we were glued to the television. We gained a new respect for Peter Jennings, who stayed on the air, live, for more than 24 hours straight, looking more disheveled by the hour. Ron Burgundy couldn’t hold a candle.

I don’t know anyone personally who died in the attacks. I was angry and confused, but not as personally affected as some. What 9/11 did do for me was solidify a bravery and vigor in me I didn’t know existed.

Lots of brave men and women enlisted after 9/11. They were ready to defend their homes against a tyranny we could not tolerate. The choice was a little different for me. I was already in the delayed entry program when the attacks happened. I was already signed up and waiting to ship out. I chose to enlist during a time of peace. A lot of people asked me over the next several weeks if I was going to change my mind now that we were going to war, and I tried to convince myself to walk a couple times, but I couldn’t. I was already committed. I was always going to stick with it. Bailing on my commitment was never really an option for me. What kind of Marine would volunteer to serve in peace, but renege in a time of war? I ain’t yella. I shipped out in January and served my country the best I could.

I did not deploy to a combat zone, and at times, I regret that. I mean, I’m glad I was not in harm’s way or exposed to the horrors of war, but I sometimes feel like I missed the full experience. I served parallel to a war that took “Wild” Bill Salazar’s life and Aaron Mankin’s face. I went to journalism school with those guys. Sgt. Rafael Peralta taught me how to shoot. He took a bullet to the head and absorbed a grenade. My buddy Nick Radloff had to put his camera down and man a machine gun. I was in San Diego writing news articles and playing “World of Warcraft.” My undead mage was formidable on the battlefield.

Toward the end of my time as a Marine journalist, I flew to New York with a group of wounded warriors from the naval hospital. Amputees, shrapnel and gunshot victims, post-traumatic stress sufferers — the whole gamut of war wounded came. I tagged along to document the trip.

The entire time, I was heralded as a hero alongside the wounded. Handshakes and hugs. Free beers. “Thank you for your service!” I smiled and took it, but on the inside, I felt like a fraud. I wasn’t a hero. I wasn’t the same as these Marines with missing legs and inside jokes. My only self-solace was that in spirit, in my heart and on paper, I agreed to do what they had done. I signed the same contract. I just happened to land at a non-deployable base. It was the luck of the draw. If I had been stationed 50 miles to the north at Camp Pendleton, my life would be very different today. I don’t know how, but it would. I do know I would have deployed to Iraq. I may have earned the Medal of Honor or snapped the greatest war photo of all time. I may have saved lives. I may have taken lives. I may have lost mine. I might have come home and not been the same person ever again. It’s impossible to know, so I have stopped trying to know.

For the most part, I have come to grips with the fact that I served during war, but never in war. It just wasn’t my call. I still feel a disconnect with other veterans sometimes. I have no idea what “Jambo” means. I haven’t Googled it because I just feel like it isn’t mine to know.

September 11 changed my life in another way, too. Exactly 10 years later, my wife pushed our son out into the world. Daniel was born on 9/11/11. My little freedom baby. Today, he is three, and he is as American as it gets. He likes steak and baseball and fishing and going to church. I guess bringing a rough, bold, American boy into the world was a way for this non-combat vet to stick it to al Qaeda.