The people who fight wars ultimately don’t determine how their wars are remembered. The author Karl Marlantes understands this better … Continued 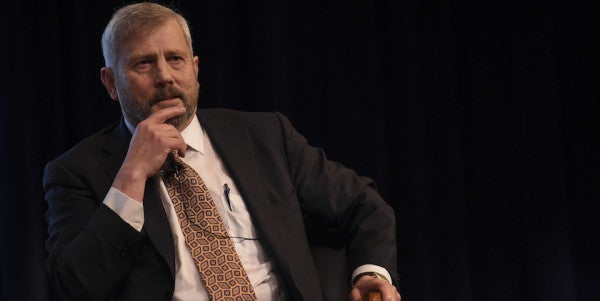 The people who fight wars ultimately don’t determine how their wars are remembered. The author Karl Marlantes understands this better than most. Fifty years ago, he was a Marine Corps infantry lieutenant in Vietnam. He came home with a Navy Cross and two Purple Hearts. In 1977, he completed a 1,200-page manuscript for a war novel called Matterhorn. The main character was based on him. More than three decades would pass before Marlantes found someone to publish it.

Matterhorn opens on a hilltop firebase near the DMZ and the Laotian border, where a pair of Navy corpsmen are preparing to slice into a Marines’ penis to extract a leech burrowed inside his urethra. This is one of the more mundane moments in the book. It blasts off like a 155mm Howitzer from there.

Marlantes’ Vietnam was not the ceaseless horror depicted in films like Apocalypse Now and Full Metal Jacket or the fever dream permeating books by Tim O’Brien and Michael Herr. Matterhorn is brutally straightforward. There is a hill and an army of “gooks” that need killing for the hill to be taken. Sometimes the Marines also kill each other.

“I wanted to write a realistic novel that was based on real stuff,” Marlantes — a Yale graduate who dropped out of his Rhodes scholarship to join the Corps — told Task & Purpose in a recent phone interview. “But publishers wouldn’t touch it. At first, it was: ‘We lost the war, and Americans don’t like losing wars.’ Then in the ’80s it became: ‘Hollywood has exhausted the subject.’ I even got a couple of letters from publishers in the ’90s asking if I’d switch the setting to the Gulf War.”

Marlantes was 65 when Matterhorn finally went to press in 2009. The novel debuted on the New York Times bestseller list to widespread critical acclaim. Marlantes has since written another book, a meditation on combat called What it is Like to Go to War. Last month, he appeared alongside journalist Sebastian Junger in Going to War, a PBS documentary about “the transformative experience of combat.” Task & Purpose spoke with Marlantes on the eve of the premiere. Below is a lightly edited version of that conversation.

Why do you think it took publishers so long to warm up to Matterhorn?

Looking back, I think people didn’t know how to handle the war. There were no clear-cut military reasons for it. The early books, The Things They Carried and Going After Cacciato by Tim O’Brien — it was pure surrealism. Even Michael Herr’s Dispatches has this sort of rock n’ roll quality to it that is surrealistic. People couldn’t quite settle down with the war until later, you started getting things like Fields of Fire and The 13th Valley. It took a while for people to digest this thing.

I suspect it also had something to do with the lack of remorse expressed by the Marine characters.

That’s an interesting theory. I did have some people criticize me — they’d say, “You never talk about the suffering of the Vietnamese people and you called the enemy gooks.” And I’d say, “Look, these are characters in a novel, and this is exactly how they felt. They didn’t give a shit about the Vietnamese people.” They don’t like to hear that.

A lot of veterans of Iraq and Afghanistan could probably relate. Terms like ‘towel-heads’ and ‘hajjis’ were often used over there to describe the locals.

I have a theory for why that is. You’re raised in a Christian-Judeo culture that says Thou shall not kill. So you can’t kill a human being. It’s just against your moral code. Then your government sends you some place and you’re 19 and they say: Now you can do it. Well, I’m sorry, you got 19 years of training and religion and morality that says I can’t do this. So the mechanism — I call it pseudospeciation. You make a false species of the enemy. You turn them into an animal so you can kill them. And the way you do that is that they’re gooks, towel-heads, krauts, hajis, and then you can pull the trigger, because now you’re killing some animals that are trying to hurt your friends or yourself. That’s where these atrocities come from — because leadership doesn’t understand the mechanism, that this is the way a kid can kill somebody.

Can troops be trained to think about the enemy differently?

Yes. You’ve got to pull them out of it as soon as the firefight is over. You gotta say, “Okay we’re coming back and now, we’re dealing with human beings again. These people you just killed were human beings. I think we should bury them.” We should have rituals for the enemy to stop the tendency to commit atrocities. In My Lai, they literally called the villagers vermin. They were totally into making them another species.

There’s nothing wrong with it , but as soon as you’re done with the fighting, pull it back. If you got a dog in the neighborhood with rabies — this is an analogy to a terrorists who’s been infected with craziness — you put the dog down. You have to. You have to kill the dog, because he’s going to kill your kids and your neighbors. So you have to shoot the dog, but you don’t blame the dog. It’s not the dog’s fault that it got rabies. So you kill him without hating him. But you still kill him.

Our policy makers also shoulder a lot of the responsibility. They are taking warriors and sending them into a place where there should be policemen instead. You’ve got a 19-year-old kid with an automatic weapon — that’s the last guy on Earth I’d want to be a cop. But if I was at war, that’s the guy I want. I don’t want the 35- or 40-year-old cop. I want the 19-year-old who will by God just get the job done. So we’re using them badly.

Do you think veterans these days have a much easier time talking about this stuff than your generation?

Oh, totally. The culture is changing. When I came back, we just shut up. You didn’t say a word. It would be like shitting on the dining room table in the middle of dinner. You just didn’t talk about the military or Vietnam.

Today, it’s almost the opposite. I’ve talked to some veterans who were downright embarrassed — they’re at the airport and people are cheering for them like they’re heroes. They’re like, “I’m a public relations officer! Come on.” Something like 95% of the military has never fired their rifles in anger, and they’re cheering for them at airports. I almost think it’s making it hard the other way. The country needs to get settled into a realistic view of what its military is doing. But I think there has also been a lot of positive change. The VA didn’t even recognize PTSD when I came home from Vietnam.

Do you think there’s a potential downside to all of this recent emphasis on PTSD?

It’s real. I have it and my family has suffered a lot because of it. This is a very melodramatic way to put it, but imagine there’s a woman tied up on the tracks, and a train is coming, and a guy runs down and manages to grab her and throw her off the tracks, but in the course of that his leg gets cut off by the train. Is he a victim or a hero? He’s a hero. He just happened to get hurt. That’s post-traumatic stress. You don’t treat them as victims. They volunteered for combat because they were brave. That’s not a victim. But you still help them. You put your money where your mouth is and you don’t just abandon them when they come home. There’s a lot of heartache and suicides because we’re not helping.

So I think we need to change our attitude. If we think, “Oh the war. It’s terrible, it’s ugly, it hurt these poor children who were sent off there to fight,” well, wait a second: Why were they sent there? Because we paid our taxes, we voted for the people who sent them, we provided the finances and the food that fed the people who built the weapons. We are totally implicated in the war. If you drive a car, the price of your gasoline is determined by our Middle Eastern foreign policy. You’re not clean. Our country does not want to take responsibility.

The last time Congress declared war was June 4, 1942. They have not declared war since. That is horrible, because Congress is at the least the bell-shaped curve representing the American people. The president, at best, represents 51% of the population, and the other half might disagree with him. So you’re cutting off half the American public. It’s not the republic going to war anymore. It’s the Democratic Party or the Republican Party. That’s very unhealthy. But I think we like that for the same reason Congress likes that: We don’t have any responsibility for it. If it goes badly, we can say, ‘I didn’t vote for it. It’s not my issue. I don’t agree with the war.’

To what extent do you think that hands-off approach to war factors into this growing cultural gap between civilians and the military?

Back in the day, when the warriors left to go fight a war, all the hunters went with them. The entire tribe was involved in the war, even if they were not out there actually fighting. That doesn’t happen anymore. So we’ve become very isolated. So it’s also wealth and the way our politics are going. The military is becoming the Praetorian Guard of the presidency. It’s just dangerous.