Does The Military Really Use Saltpeter To Kill Troops’ Libidos?

Boot camp gets pretty hard, but many recruits find that throughout the ordeal they … can’t. It is a longstanding... 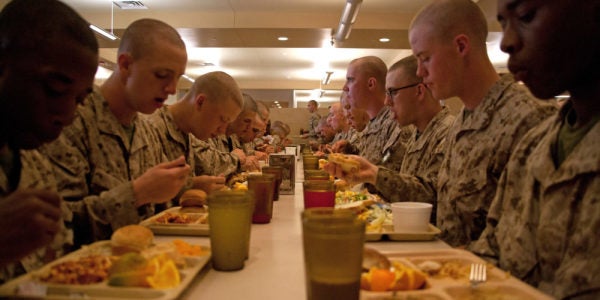 Boot camp gets pretty hard, but many recruits find that throughout the ordeal they … can’t.

It is a longstanding rumor across the services that the sudden onset of impotence experienced by new enlistees is a result of being drugged with potassium nitrate, more commonly known as “saltpeter.” Allegedly, the ionic salt has been used for generations. The cooks in the dining facility at boot camp, or basic training, supposedly sprinkle the substance into all the food to prevent male recruits from getting too excited. You know, because sexual urges are the military’s real enemy.

“We are such rampantly virile men that those in command fear us and what we might do if left unchecked,” Snopes writes.

The inability of newly minted service members to “rise to the occasion” is all too common a phenomenon. Between 2004 and 2013, erectile dysfunction affected approximately 10,000 active duty servicemen every year, according to Military.com.

The truth is, they aren’t lacing the chow hall food with anaphrodisiacs. If they were, it certainly isn’t saltpeter, which doesn’t actually decrease sexual urges at all. In fact, it is more likely to be found in gunpowder or fertilizer than your meal.

But the notion itself does certainly help to create camaraderie around a shared experience. The myth builds up the egos of the unit, since virility is seen as such a large part of what makes men, well, men.

The real reason for the impotence is likely the pure exhaustion from the rigors of basic training, change in environment, new diet, and stress, according to Snopes.

Erectile dysfunction can be caused by a number of factors both physical and psychological. Mental health conditions like stress and anxiety can also impact how your brain triggers a normal bodily response. Simply put, your brain might get the call to attention, but your … soldier may not stand.