My grandfather served in the Pacific during World War II and died three months before I shipped to Iraq. I... 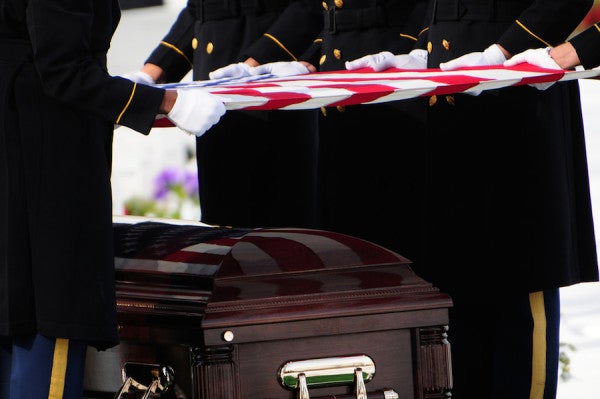 My grandfather served in the Pacific during World War II and died three months before I shipped to Iraq. I can’t say I knew him well and that saddens me. He was a man of few words and so it was startling when he came up to me at a family event after finding out I was being deployed, grabbed me by the shoulders and just stared at me. He had tears in his eyes and didn’t say a word. At first I thought it was just an emotional goodbye and I half expected him to give me advice or impart some piece of battle-hardened wisdom, a moral nugget to take with me into the desert. But he just stood there in silence. He had been critical of the war in Iraq while I had been a supporter. I wouldn’t realize until later that it was the absence of his words that was most profound. In fact, it is language and the use of certain rhetoric that has left my generation isolated, inhibiting our ability to reintegrate, and impeding us from understanding our wars in any meaningful way.

American soldiers don’t die in vain, we are told. And when we come home, we are all heroes. While that sentiment no doubt has roots in real compassion, for the young person going to a far off place to fight, it does little to help us critically look at the misguided strategies that put us there in the first place. As Elizabeth Samet notes, “once a soldier becomes a symbol, an abstraction available for political ends, we deny him or her the humanity we strive to celebrate.” Indeed, my generation has become such a symbol, obscuring and distorting the reality and perhaps the futility of our wars.

The best summation of the absurdity of war is not “War is hell,” but was scrawled inside a porta-john in Kuwait: “What a lovely fucking war,” it read.

Everyone likes a good war story, especially one that shocks the conscience, but leaves the audience with a solid conclusion, a way out, a resolution. What is our generation’s story then? Our wars have been likened to both World War II and Vietnam at the same time. We embody the self-sacrifice of American troops liberating France, while simultaneously fighting an unfavorable war. These are the longest standing wars and while our chapter closes, new enemies deny us any conclusion or absolute victory.

For the last thirteen years, there was a fair amount of certainty you were going to Iraq or Afghanistan if you enlisted or commissioned into the armed forces. In fact, many went two, three, and four times, making our generation unique in that our military has been at perpetual war for over a decade. The American public remained largely disengaged from those theaters of war, yet they celebrated the soldiers coming home with a degree of hyper-patriotism and hero-worshiping. It’s a strange dichotomy when someone tells you, “Thank you for your service, but I don’t agree with the war” or “Wow, that must have been such an experience. What are you guys doing over there again?” Yet we are told time and time again we are all heroes.

The Vietnam Syndrome, while correcting the deplorable way those vets were treated, has gone too far the other direction, placing today’s vets on a pedestal and out of touch with the civilian community. This does little to help veterans reintegrate and little to help our country move on and critically examine the wars without sounding like we are damning the troops. It is as if the patriotic country songs about war and flag waving are coping mechanisms; the louder we celebrate the troops, the better we will feel about sending them.

Alex Horton writing for The Atlantic calls this “the pedestal problem” and points to the fact that veterans are thought of in the span of halftime shows and beer commercials. Other veterans point to their own service overseas as if it makes them more capable than their civilian peers. Task and Purpose contributor, Carl Forsling calls it “veteran entitlement,” in which vets demand instant respect and benefits, or talk up their war experiences to get admiration. But the issue is deeper than whether or not we choose to tell war stories, real or made up. It lies in how we talk about these past wars in general, and more importantly, how we look at the wars developing now.

By the time I came home in 2011, it felt like the wars were already being forgotten. Afghanistan was so distant a place from the minds of everyday Americans that it was hard to imagine we were a nation at war. The only ones talking about it were other veterans and they usually did so as if talking about a game of “Call of Duty.” I felt an isolation so severe I didn't want to identify as a veteran and I found myself more critical of those vets walking around campus with their camo backpacks and patches from various units as if returning from band camp, than the civilian students talking about their weekends out. There was something missing from the narrative.

I had more questions than answers. I watched as fellow veterans dramatized their experiences and wore their service on their sleeve to the point it seemed like theater, yet this has been reinforced by the need for our good old American war story with a moral ending, which Vietnam vet and author Tim O’Brien would say, makes it altogether “untrue.”

We glorify to the point of ignorance.

There is a divide between veteran and civilian, but there doesn't have to be. There is also a divide among veterans. Our wars were so long, they were many, and altogether different. The “shock and awe” invasion of Iraq stands in stark contrast to the surge. Those who were in Afghanistan in the early years saw a different war than those who are there now. And yet all of us have been called “The New Greatest Generation.” However, as Horton points out, the original greatest generation became great after the war and included a civilian populace that World War II vets were eager to reintegrate into, in order to move the country forward. It was not the war fighting necessarily that made them great, but their ability to critically look at where they had come from and thrive from it.

My grandfather kept history books about World War II. I imagine it was his way of trying to understand his war, much in the same way I collected anything that had to do with Iraq or Afghanistan for years following my return. At the final page of one of his history books entitled “The Eyes of the War” is a crude picture of a slain American GI, face down, still clutching a grenade while his other hand still fingers the trigger of his machine gun. The caption is minimalist, but exact and carries an almost clinical tone. The pragmatism of the picture starkly contrasts with the idealistic message written vertically on the same page, “This must never happen again.” When I saw it I wondered what Grandpa had thought, if he too struggled with the contradiction of the futility of that death alongside the idealistic notion it would somehow stop other wars.

War will never cease to be a human phenomenon. And yes, they are necessary sometimes. But if as a nation we fail to grasp the reality, the cold and often uneasy truth behind why we send people to die on our behalf, then we impede our veterans from becoming civilians again, and distort our ability to construct coherent strategies for future wars.