This Is Why I Resent Being Labeled An ‘Army Wife’

I’ve definitely been called worse, but being called an “Army wife” makes me cringe. It’s not that I’m ashamed of... 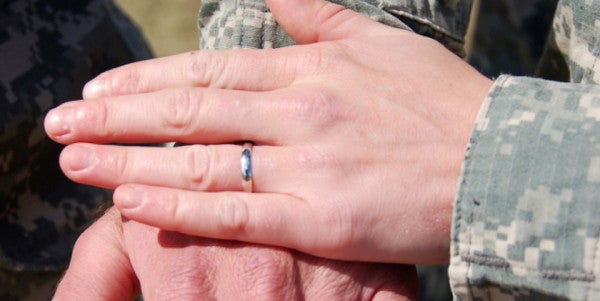 I’ve definitely been called worse, but being called an “Army wife” makes me cringe.

It’s not that I’m ashamed of my husband or of his career — I’m not. In fact, I’m extremely proud of his service and of our marriage. My main beef with this particular label deals with the way in which army wives are perceived by others.

• “Army wife” sounds like a sidekick, like housewife or football wife or trophy wife. Batman’s Robin is obviously the lamest superhero, and army wives don’t even get a cape.

• We never hear about “Army husbands,” but there are currently more than 214,000 women serving in the military. Surely some of them are married. What gives?

• Such stereotypes are perpetuated by that idiotic-but-popular Lifetime television series, “Army Wives.” (Except the one about being fat. The cast is soap opera svelte).

Look, I realize that smart people don’t buy into stereotypes, but the problem is the lack of context makes stereotypes the only types. And an ever-widening civilian-military divide exacerbates this problem. We’ve effectively lost any context that might prove stereotypes to be false. It’s the inherent problem of minority. Less than 1% of Americans have ever served in the military. Meanwhile, twice that number tuned in to watch “Army Wives,” which posted 4.8 million viewers at its peak.

Eight years ago, I graduated from West Point and became an Army officer. Five years later, after two tours in Afghanistan, I left the service. I was no longer a soldier, and for the first time in my life (I was born an Army brat), I had no affiliation with the military at all, except that I was a veteran.

I’ve since married an Army officer, and as a result, I’m allowed back on post. Now, I am an Army wife. And while I know it’s just semantics, I’d rather be called a veteran, or “Ma’am,” or “hey you,” or almost anything other than an Army wife.

My mother became an Army wife before she was even old enough to drink. She was the rock of our military family, and not because she was dutiful, but because she was strong and capable. My mother was also an entrepreneur and an artist and a hard worker and to my father, she was his best friend and partner. She was his equal. No battle buddy of his ever took precedence over her. She didn’t cower and bite her nails in the background while my dad went off to do heroic things. She was a hero in her own right. And my mother, the first and finest Army wife I’ve ever known, never let her Army husband take himself too seriously.

Remembering my mother’s example is how I know that the cynicism and stereotyping surrounding Army wives is merely the harsh, powerful light of popular culture. Not truth.

But pop culture is strong. To most folks, the military is a “Beatle Bailey” comic, and there isn’t much information about Army wives there. So, Google might provide some insight into Army wives, right? Wrong.

Here is what auto-fills when you enter into Google “army wives are:”

I can’t help but feel a bit defeated and extremely offended by this.

A few weeks ago, I had a moment of ugly entitlement while negotiating with a man my husband and I had contracted to do some landscaping. I asked him whether or not he offered a military discount because that 10% really adds up when you’re dropping a few grand on sod and shrubs and pavers, and a couple truckloads of mulch.

“Yes, matter ‘afact, we do,” he answered, patriotically, “and thank your husband for his service.”

“Well, thank you. I will, and I appreciate it. And you know, I’m actually also a veteran myself, so you’re welcome.” I was set on putting down his obvious presumption that I wasn’t the veteran just because I was a woman.

“Oh, yes, ‘acourse. You Army wives make quite the sacrifice.”

Suddenly, realizing that he was right, that he’d never get my point, and that it didn’t matter, I became grossed out by my own pettiness, so I shut up, like a good Army wife.