Why Does The Military Ban Soldiers From Carrying Guns?

Lost in the recent tragedies and in the debate about gun control is the reality that military bases within the... 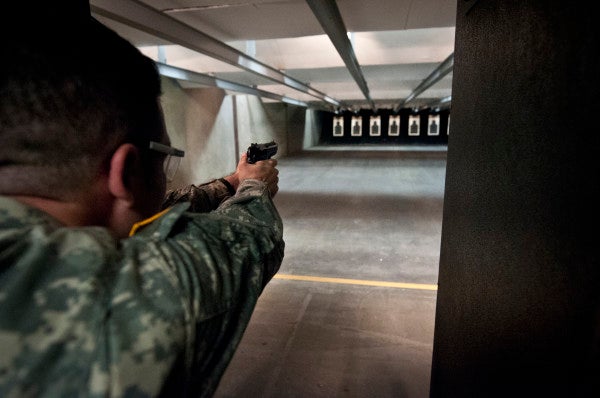 Lost in the recent tragedies and in the debate about gun control is the reality that military bases within the United States have the strictest gun control of anywhere in the country.

This sentiment was captured well in a letter written by a U.S. Army 1st Lieutenant who survived the recent shootings at Fort Hood that left three dead and dozens injured.

“When the first shots rang out, my hand reached to my belt for something that wasn’t there,” writes 1st Lt. Patrick Cook, who was trapped in a room that the shooter, Spc. Ivan Lopez, tried to gain access to. Sgt. 1st Class Daniel Ferguson was killed keeping Lopez out of that room.

Cook goes on: “Stripped of my God-given Right to arm myself, the only defensive posture I had left was to lie prostrate on the ground, and wait to die.”

No one is allowed to have a concealed carry permit on a military installation, the military doesn't even issue them. Weapons must be registered on base and either kept in the home or stored in the base armory. Generally, service members who live in military barracks are not allowed to keep weapons in their room at all.

The rules are guided by a 1993 Pentagon regulation that dictates that weapons on military bases are only allowed to be carried for official purposes like law enforcement or sentry duty, prohibiting “the carrying of non-Government owned or issued weapons or ammunition.”

But banning the right of Americans to concealed carry has been deemed unconstitutional. Late last year, the 7th Circuit Court of appeals struck down a ban on concealed carrying in Illinois.

Judge Richard Posner wrote in the court’s majority opinion that “The theoretical and empirical evidence (which overall is inconclusive) is consistent with concluding that a right to carry firearms in public may promote self-defense.”

In his first statement to the public after the most recent shooting at Fort Hood, the commander there, Lt. Gen. Mark Milley, dismissed questions about whether troops should carry guns on base.

But there are also police in the civilian world, and the existence of law enforcement has never served as a viable argument to limit the right of Americans to keep and bear arms in the civilian sector.

So why does it in the military, where virtually everyone has training in using a firearm, knowledge of the principles of weapons safety, and many have practical experience in combat that outpaces most civilian law enforcement?

With last week’s shooting at Fort Hood, perhaps it’s time for the Pentagon to reconsider this stance.

As Cook writes: “At the point blank range at which this shooting occurred, anyone with an M9 and some basic instruction could have ended the mayhem as quickly as it began.”