Ask A Veteran: Is ‘Thank You For Your Service’ The Right Thing To Say?

Welcome to Ask A Veteran, a place for civilians (or anyone!) to ask questions about the military or veterans issues. … Continued 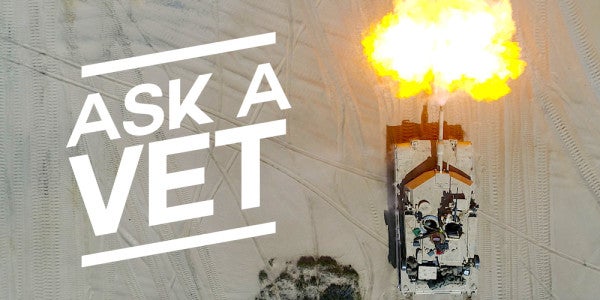 Here is the first thing to know about veterans: No single voice can represent them. Each service member is shaped not only by their race and gender, but also the branch of the military they chose, the rank they held, where and if they deployed, and so much more. The breadth and variety of our experiences in our big ol’ machine of war are immense, and it would be foolhardy to let some jackass who rolled around Iraq in a tank 15 years ago speak for everyone.

But that doesn’t mean we should seal our experiences off from other Americans! One of the reasons the civilian-military divide exists is because military service, to many civilians, is an inscrutable culture with no clear entry points (aside from recruiting stations, of course, but those places are filled with lies). So, let’s demystify it by helping our friendly civilians learn more about the men and women who fight to protect them.

Nate asks:I've heard “thank you for your service” gets annoying. Is there a fairly common platitude from civilians that soldiers/vets find comfort in hearing a lot? (or is the fact that I said “platitude” an answer in and of itself?)

I believe Nate stumbled onto a shaft of light with his parenthetical: “Thank you for your service” is indeed a platitude and one that makes me uncomfortable. A decade and a half since leaving the Marines, I still don’t have a response that feels right. “You’re welcome” makes it sound like my service was a favor paid to this stranger; it makes them a beneficiary in my story when they don’t belong in my story.

I typically say, “It was an honor to serve.” This, at least, is true, and it effectively ends the conversation, which — I would guess — is often the desire of the person who said “thank you” in the first place. My response is a platitude extended to close the platitude loop, reducing my war to small talk. (“Nice war we’re having today.” “Sure is.”)

Unfortunately, despite my entirely correct opinion, many veterans feel the need to exercise free will on this matter. They like being thanked for their service. They have the capability to accept gratitude for their hard work and sacrifice without questioning the motives of the person saying “thank you.” They are (*exaggerated finger quotes*) “better and kinder people than I am.”

So what’s the right thing to say, if even veterans can’t decide what that is? I recommend feeling it out. Don’t make the interaction about YOUR connection to the military (“My grandfather served in Vietnam and I just want to say…”). Try to connect to the person standing in front of you: “How did your experience shape who you are today?” “What’s a lasting memory from being deployed?” “What was the best part of being in the service?”

If you ask open-ended questions — particularly ones that show an interest in the person beyond “TAKE ME INSIDE YOUR DARK HEART OF MURDER” — it gives the veteran an opportunity to be as guarded or as open as they feel that particular day.

Maurice asks: Do you dream of the people you injured/killed?

First of all, congratulations on skirting around The Question, as it’s known in vets circles. By assuming I’ve wrecked some shit — or perhaps by knowing I have, as I’ve written about it before — you are free to ask the secondary question: Have the sins of war bled into my subconscious? Is my sleep haunted by glimpses of hell? Can killers rest peacefully?

Let’s be clear: This is an OK question for this judgment-free column, but you shouldn’t ask this of any vet you encounter without an explicit invitation to do so. Vets are typically ordinary people with (occasionally) extraordinary experiences; encountering one isn’t a green light to explore the extremes of war by proxy. If you’re not asking doctors about the patients who’ve died on their watch, and if you’re not asking firefighters about the people whose lives they couldn’t save, you also shouldn’t ask veterans about the people they might have killed or injured.

But! This is a no-holds-barred column, and so I will not shy from your question. I rarely dream about my military service — maybe once a month? — and never about the combat I experienced. If and when I dream about war, it involves scenarios completely unlike the engagements my platoon fought in. The last one I had, a few months ago, I was clearing Baghdad on foot and everyone was searching for a working toilet (At one point, I opened the door of a bathroom and saw a prominent veteran author pooping). Hey man, you asked.

This is not to make light of something that DOES happen to a lot of vets. The dead haunt a lot of dreams, though our friends who died in combat are more frequent ghosts than those on the receiving end of our gunfire and assorted explosives. This isn’t a lack of empathy — merely a case of favoring the people with whom you formed bonds.

Indeed, the hardest part of war for me wasn’t the shooting and killing — that’s what I trained for, after all — it was the wild swings between the extremes of human emotion. It’s easy, with the right training, to shoot everyone who’s wearing a uniform different than yours. It’s considerably more difficult to shift from that killer mindset to one that sees the joy of children and the fear of mothers, to witness the struggles of normal people who didn’t choose to live in a war.

I have been witness to agony that broke my heart — people shrieking at the death and injury of their loved ones; refugees fleeing their city on foot, so many of them they clogged the highway, desperate with thirst and hunger. Marines in our own regiment were cut off from vital supplies, and still we gave our food and water to the refugees. There was no other choice: It was the human thing to do in a great big dumb war of humans failing other humans. I think of them often.

Have a question? Email editor@taskandpurpose.com with 'Ask A Veteran' in the headline or tweet with #AskAVet and we may include your inquiry in an upcoming installment.