The Army’s Tortured History With Drawdowns And Budget Cuts 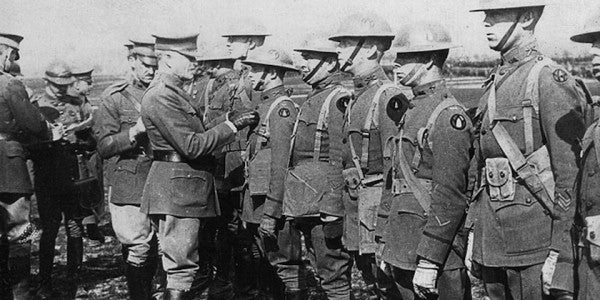 This could have come from any Army leader’s mouth during this time of budget cuts and shrinking troop numbers, but the author, Rep. Frank Greene, a former congressman from Vermont and member of the House Committee on Military Affairs, was writing in 1922, on severe cuts in defense spending following World War I.

He goes on to say, “For my part, I think it would be a wise thing if the Army went quietly about its business for the next few years, sought every proper means of showing its inherent worth, both to government and the people, cleaned its house wherever necessary, both in personnel and in customs, and then found itself ready to take advantage of the turn of the tide. And the tide will surely turn.”

In a near echo of these concerns, now-retired Gen. Raymond Odierno, the outgoing Army chief of staff, said in an interview with Army Times, “If we get small enough where some of these leaders don't believe the Army can respond or deter them, if you can't … deter them from believing they can accomplish something … that increases the threats and danger to the United States.”

Downsizing and budget cuts are nothing new to the Army. Following every major conflict there has come a time when the Army has been forced to consolidate. Even the global situation is not unique; drawdowns have come at times where the United States was still expected to project power and protect its interests at volatile spots on the globe. However, never before have such drastic cuts come at a time when the people of the United States and the government as a whole were so willing to accept military engagement with no long-term parameters. A comparison to the time after World War I, when the Army experienced its most disastrous cuts in modern history, helps as a parallel.

World War I was a watershed moment for the Army. It mobilized active, National Guard, and draftee divisions; trained them; and put them overseas in France to carry out protracted campaigns — all in less than a year. At its height, the Army of 1918 swelled to 2.5 million men and women. By 1920, however, the Army had dropped down to barely 200,000 men, with only 56,000 in the National Guard. Further cuts in 1922 and 1923 left the Army at 133,000. Larger than the Army of 1916, but a far cry from the Army that led the American Expeditionary Force in France during the world war. What happened?

Three things: a wave of pacifism and isolationism following the massive casualty lists from World War I, a national security strategy that relied heavily on the Navy for national defense, and the National Defense Act of 1920.

Out of these, the most important was the NDA of 1920. It was the first time that the president took an active role in “promulgating a military policy for the United States,” as a New York Times article stated. The new policy cut the Army’s personnel heavily, moved qualified officers who no longer had a position in the Army to the National Guard and the newly-created reserves, expanded the reserve components, and placed the remaining Army units in a state of high readiness for mobilization. President Warren G. Harding envisioned a regular Army that could deploy quickly and a reserve force of shell divisions that could be recruited to full strength in the event of war.

At first glance, this plan seemed doomed to failure. However, the system created by Harding and then-Army Chief of Staff Gen. John Pershing was actually quite forward thinking. Although the regular Army was smaller, they were able to spend more money on professional schooling for officers and noncommissioned officers across all Army components. Education and training became the focus, which paid dividends when the Army mobilized in 1940–1941 for World War II. Professionally trained officers and noncommissioned officers were available from all three components to man and train new units. The real gap was in research and development of new weapons and technology. Army Chief of Staff Gen. Douglas MacArthur wrote in 1933 that the Army’s tanks were useless on a modern battlefield. The Army continued to rely on their stocks of war materiel from World War I up until the beginning of World War II, severely hampering overall wartime readiness.

That the U.S. Army could continue on this track well into the 1930s — when Japan and Germany were militarizing, communism and nationalism were tearing Spain apart, and Italy was invading Ethiopia — was only made possible by the isolationist tack of U.S. foreign policy. It was a widely held belief that the arms race had brought about World War I, so a spate of arms control treaties marked the interwar years. As long as the great powers (U.S., Britain, France, Germany, and Japan) abided by these treaties, then global aggression could not bring about another world war. The U.S. also pursued good diplomatic relations with the Soviet Union and passed several neutrality acts in the 1930s to make it clear that it wanted no part in a European conflict. Defense spending was, therefore, purely for defensive purposes, not the two-front offense that World War II would bring. It was not until 1939, when Britain and France declared war on Germany, that the U.S. government made significant changes to boost defense spending and authorization.

Today, the Army is facing a drawdown to 450,000 soldiers, the smallest it has been since before World War II. Still, that number is far greater than the 269,000 of 1940. U.S. foreign policy, however, is much different than that of 1920–1940. While there remains some traditional isolationism, the U.S. populace remains committed to the idea of American military power being used as a force for good in the world. There is division and debate over how to use it in an unstable Middle East or to counter Russian aggression in Ukraine, yes. But the commitment of Army advisors in Iraq and Eastern Europe, as well as the year-long air campaign in the Middle East has widespread support and approval. In addition, the U.S. remains committed to its military support of the government of Afghanistan. It is clear that although American foreign policy under the Obama administration endeavors to negotiate rather than use force (examples include opening diplomatic relations with Cuba and the proposed nuclear deal with Iran), it is still very willing to use military power when necessary.

Where the Army was in a defensive posture for the continental United States in 1920-1940, the current Army is tasked with containing global threats before they reach the homeland. As stated in the 2015 National Security Strategy, the military will “conduct global counterterrorism operations, assure allies, and deter aggression through forward presence and engagement.”

That same document goes on to say, “Although our military will be smaller, it must remain dominant in every domain.” That is a tall order in an age of non-state actors, proxy wars, ever-growing cyber threats, and increased weapons proliferation. The Army will be stretched thin to meet these challenges and will most certainly be hoping that “the tide will surely turn.”